In the Land of Blood and Honey 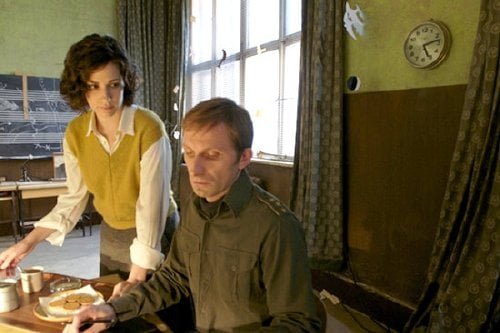 Megastar actress Angelina Jolie moves behind the camera for the first time with her original story about the ethnic cleansing that took place in Bosnia in the 90s at the hands Serbian rebels. Amidst this conflict, two people, one a Serbian soldier, the other a Muslim artist, fall in love but events will come between them “In the Land of Blood and Honey.”

In 1992, Muslims, Serbs and Croats lived in harmony. Danijel (Goran Kostic, "Taken"), a Serb policeman, is seeing Ajla (Zana Marjanovic), a vivacious Muslim artist, when conflict breaks out. Four months later, Ajla, who is living with her sister Lejla (Vanesa Glodjo, "Grbavica: The Land of My Dreams") and Lejla's infant, is rounded up along with many other Muslim woman in their apartment complex by men under the command of Danijel, the son of General Nebojsa Vukojevich (Rade Serbedzija, "Batman Begins," "X-Men: First Class"). When Danijel sees Ajla entering his camp, he tries to protect her, telling his men she is his personal property. But he is also committed to his father, who would wipe her people of the face of the earth "In the Land of Blood and Honey." Writer/director Angelina Jolie makes her feature film debut with a love story that is more complex than the usual lovers-separated-across-political/racial/religious-divides theme we've seen so many times. The actress who is known for her humanitarian work wanted to address the global issue of nations which have knowledge of genocide yet take no action to stop it and she's delved into the many humanitarian issues of the Bosnian war to speak her piece. The film isn't an easy sit, but if Jolie hid her identity in order to get honest feedback on her script from local Bosnian actors, her fame may engender curiosity among filmgoers who otherwise might not give this worthy picture a chance. What Jolie has done is created a man torn between his own moral compass and a history of hatred (which does raise the question as to how Danijel would have dated Ajla in the first place, so rigid are his father's expectations). Ajla has everything necessary to make one question hatred of her people - she's creative, warm, caring, beautiful and sexy (Marjanovic was a real find and the camera adores her) - yet Jolie uses her as the pivot to illustrate the horrors of war. When she's brought into camp, the women are immediately humiliated, soldiers pulling off eyeglasses, jewelry and clothing. One woman is brutally raped in front of the rest and when it seems as though Ajla will be next, in steps Danijel. Their former easiness together is now a gulf full of emotional landmines. Is her behavior towards him based on their former affection or is it a sham hiding fear or malicious intent? Danijel himself has only so much leeway as he must act the part of the general's son in public - when a fellow soldier trips Ajla in the mess hall, then grinds her hand into the floor with his boot, Danijel must just cooly observe, compensating with tender lovemaking later. Jolie uses a conversation between Danijel and his father to provide historical background while also defining their relationship. The elder Vukojevich wants vengeance for the death of his mother and siblings while his son speaks about the quandary of warring against former friends and neighbors. Here is a good time to shake things up and Danijel is transferred to Sarajevo while Ajla escapes back to the underground using a security weakness Danijel had shared with her. Ajla is found and reunited with her sister (Jolie has kept us abreast of Lejla's travails, horrific despite being left in her home) who has joined a resistance group, but soon she is caught once again and reunited in turn with Danijel - but is she now bait? Jolie covers so much of the horror - people left to fend for supplies in a hostile urban environment where passersby are shot in cold blood, the rape camps, women used as human shields in gun battle, all while the outside world does nothing (U.S. Secretary of State James Baker famously declared 'We do not have a dog in that fight'). It is surprising how many parallels can be made to Lu Chuan's film "City of Life and Death" about the rape of Nanking. Yet she also finds beauty, not only in Ajla herself but in Danijel's quest to find her work in the National Gallery (a different kind of history) and bring her back to enjoy it. It is ironic later when an undeniable request for a portrait from a terrified Ajla ends up condemning its subject. And as with most anti-war films, we witness the futility of politicized racial and religious retribution as it only continues to feed upon itself. Jolie's managed a lot on a limited budget, with Budapest standing in for war-torn Bosnia (production design by Jon Hutman, "The Tourist"). Editor Patricia Rommel ("The Tourist") ensures the violence is almost always sudden and unexpected while composer Gabriel Yared's ("The Lives of Others") score is complementary without being intrusive. Costume designer Gabriele Binder's ("The Lives of Others") work also greatly aids the film's authentic vibe, with Ajla's yellow sweater vest, which she wears for months, as memorable as a life jacket.

It helps, for a first time director, to be a rich, world-famous actress whose face is everywhere and known by everyone. But, even someone on the top of the heap who wants to bring her vision to the big screen has to get financing and studio cooperation. Jolie got the money and made her film her way and the result is uncompromising and gut-wrenching. The very brief prologue declares that the Serbs, Croats and Bosnian ethnic groups have lived in relative harmony, under Yugoslav dictator Marshal Tito, since the end of World War II. The fall of Communism broke all binds between these disparate groups and the Serbs, in particular, refuse to be put under the rule of a Muslim state. The term ethnic cleansing became the watchword for the 1990s as tens of thousands of innocents, mostly Muslim, were executed, raped and tortured by Serbian troops. Jolie begins the story just before the war and Serb Danijel (Goran Kostic) and Bosnian Muslim Ajla (Zana Marjanovic) are dancing to a romantic song in a Sarajevo nightclub. What could have bloomed into romance comes to an end when a huge explosion rocks the bar, killing many. Soon after, the militant, well-equipped Serbs decide to take over the country by force and begin rounding up Muslim men, women and children. For the men and children, the horror, sorrow and pain end soon with a bullet. The women, though, have a different fate in store for them and are transported to what the Nazis once called a joy division – a brutal camp where rape and beatings by Serb soldiers are the norm. Angelina Jolie made the tough decision to release her first feature with Serb, Croat and Bosnian languages subtitled for international release. (She also made an English language version for release in Britain). This verisimilitude is coupled with a powerful story and believable acting, making “In the Land of Blood and Honey” an earnest, heart-on-her-sleeve writing/directing debut for Jolie. Some of the directing shows her new-to-the-job status but her work with some great director has also proved a classroom in filmmaking for Angelina and that shows, too.