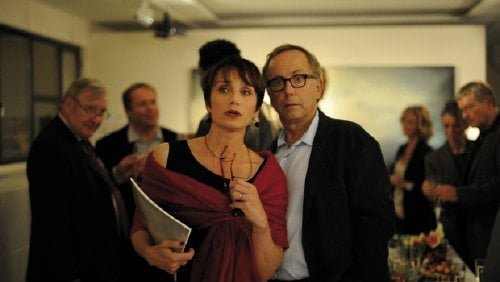 Lycee Gustave Flaubert literary teacher Germain (Fabrice Luchini, "Intimate Strangers," "Potiche") is more than usually disgusted by his first batch of papers from his latest class. "48 Hours in the Life of a Teenager" turns into something quite provocative, though, when he reads Claude Garcia's (Ernst Umhauer) voyeuristic entry about gaining access to another student's home and family to his wife Jeanne (Kristin Scott Thomas, "Love Crime"). Germain gets pulled in deeper and deeper as his student's papers keep the story going and fantasy and reality become blurred when Claude insists that in order to continue, he must be "In the House."

Writer/director François Ozon ("Potiche") has found a kind of gender reversal of his own 2003 "Swimming Pool" in adapting Juan Mayorga's play in what may be this year's most entertaining film to date. This complex tale of a student manipulating his teacher works on multiple levels. There is the surface story, the story which is being told and the possible interpretations of that story, all enhanced with literary references and social critiques. Claude tells of a house he is fascinated by, one which he could only dream of living in, but which his fellow classmate, Rapha Artole (Bastien Ughetto), does. Claude uses Rapha's difficulty in math, a subject in which he excels, as his entry, offering to tutor the grateful boy. Once inside, he tells of an intriguing odor, which leads him to the scent of Rapha's 'middle class' mother Esther (Emmanuelle Seigner, "The Diving Bell and the Butterfly"). The scene has a distinct sexual undercurrent. Germain's reactions to his student's serial (each assignment ends with 'to be continued') are perversely contradictory. Having found something other than the banal papers he was just complaining about, his first comment about Claude's is that it is unseemly and perhaps should be reported. He questions the boy after class and is asked a logical question - who else would be reading it? Germain tells his first lie. Each assignment adds another level of concern as to what Claude is up to, but the Germains are hooked. So much so, that when Claude writes that Rapha Sr. (Denis Ménochet, "Inglourious Basterds") has banned him from the house, Germain steals a math test betting Rapha Jr.'s ensuing grade will ensure his reentry. Jeanne is disturbed when she reads about it in Claude's next paper, as well she should be. Claude's story hasn't even yet touched upon suicide, adultery and statutory rape. Every step of the way, Germain tutors his fledgling writer with advise that is clearly contrary to his latest reaction, one obviously elicited by the author. When Germain advises Claude read Flaubert's 'Madame Bovary,' he lauds the author's refusal to judge his characters, having found Claude's comments a have-not's commentary on the bourgeois. Then Germain disregards his own stated literary principles. As Claude plays with Germain, Ozon plays with us. There are too many obvious parallels between the Artoles and the Germains - is Claude fictionalizing the former to attain a goal with the latter? The film is sprinkled with amusing clues and parallels, from Jeanne's desperation in keeping her job running The Minotaur's Maze art gallery, stuffed with pretentious modern 'art'(Esther is obsessed with home decoration), to the couples' choice of a night out, Woody Allen's "Match Point." As we watch them gaze up at the screen, we cannot help but note the allusion to reading Claude's work. Luchini handily walks the line of saying one thing, while doing another. He's a perfect dupe, too confident of his own intelligence to see what is evident to us. Kristin Scott Thomas gets better and better as she crosses between comedy and drama and English and French language films. She's hilarious here, offering sharp commentary on her husband's predicament while oblivious to her own part in it. Umhauer necessarily makes Claude something of a cipher, his self-satisfied, devious grin appearing only for our eyes. The film, with its cool school environment contrasted with warm home interiors all accentuated by Philippe Rombi's evolving ("War of the Buttons") score, resembles a Chabrol thriller with cozy meals and middle class critiques. "In the House" joins a handful of clever films where fiction and reality merge, like "Adaptation" or Zoe Kazan's more recent "Ruby Sparks." This is a film that earns its twists. It's thrilling, funny, smart and hugely entertaining, more satisfying than the director's breakout film.