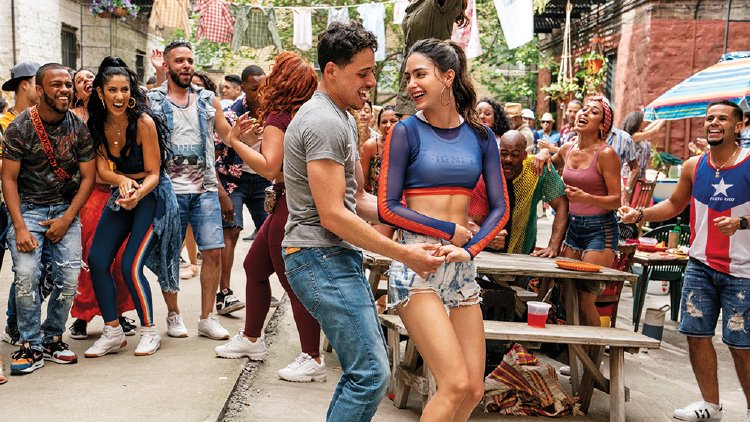 At a Santa Domingo beach bar, Usnavi de la Vega (Anthony Ramos ("A Star Is Born," "Hamilton") explains what a sueñito is to the four young children gazing up at him.  His story about his own ‘little dream’ begins “In the Heights.”

After the huge success of Lin Manuel Miranda’s “Hamilton,” both on stage and film, it’s no surprise that his earlier work (he wrote the music and lyrics while Quiara Alegria Hudes wrote the play itself based on her book – they both adapt here) would be a prime candidate for a movie.  As directed by “Crazy Rich Asians’” John M. Chu (who has earlier musical creds with “Step Up 3D") this is no filmed stage production, made evident right off the bat with its high energy, knockout opening number ‘In the Heights.’

That constantly evolving song-and-dance number introduces the Washington Heights neighborhood, the film’s major players, its innovative choreography employing dancers of all ages and body types and its immigration theme (Dreamers are mentioned more than once, not a surprise with the central bodega named ‘little dream’).  As Usnavi’s bodega owner and his regulars – crush Vanessa (Melissa Barrera, Showtime's 'Vida'), Abuela Claudia (Olga Merediz from the Broadway musical) and the salon Greek chorus of Daniela (Daphne Rubin-Vega, Broadway’s “Rent”), Carla (Stephanie Beatriz, TV's 'Brooklyn Nine-Nine') and Cuca (Dascha Polanco, "Joy") – begin their daily routines, Nina (Leslie Grace) arrives back in her home town from the Ivy League school her dad, car service owner Kevin Rosario (Jimmy Smits), sacrificed so much to send her to.  Chu wraps the whole with hundreds of dancers in the street reflected on the bodega’s window, Usnavi peering out as if upon a dream…

The film is like a kaleidoscope, constantly rejiggering itself from one story and musical number to the next.  Benny (Corey Hawkins, "Straight Outta Compton"), a Black man who is the lead dispatcher for Rosario’s car service, pines for Nina, whose isolation as a Puerto Rican at Stanford has made her pine for her own community but which will fly in the face of her dad’s dreams for her (in one of the story’s best pieces of plotting, Benny will prove the worth of the Rosario family business to its neighborhood during a blackout).  ‘Danny’ pleads with her salon customers to follow her when her business moves three transit stops away, a victim of gentrification, which leads into the gossip-themed ‘Tell Me Something I Don’t Know,’ complete with animated and bewigged mannequin head stands.  A spectacular public swimming pool piece which throws the spotlight on Vanessa celebrates Latin American heroines like Chita, Rita and Frida, complete with Esther Williams-style synchronized swimming.

The film’s climax takes place during the blackout it’s been counting down to, where the childless Abuela-to-the-neighborhood Claudia reflects on her life in Cuba to the present.  It’s an emotional journey, but the film never really regains its energy in the second half which follows, despite a “Royal Wedding” homage using fire escapes and the side of an apartment building.

Supporting player Anthony Ramos (he was Lady Gaga’s friend in “A Star Is Born” as well as Hamilton’s son in “Hamilton”) gives a star-making turn in the lead role with a charismatic performance that grounds the film.  His recollection of how his dad came up with his name is one of the film’s comic highlights.  Lin-Manuel Miranda, who played Usnavi in the Broadway version, lends support here as the Piragua Guy, singing his song as he pushes his cart of flavored shaved ices while kids run towards the ice cream truck.  The diverse members of the ensemble all sing in a range from passable to professional, and we witness once again Miranda’s unique ability to craft songs which blend current musical styles with Broadway traditions.  The film also features Gregory Diaz IV as Usnavi’s cousin and protégé Sonny and Marc Anthony as Sonny’s alcoholic obstacle of a dad.

“In the Heights” takes off like a rocket which may make its soft landing inevitable.  The story resolves neatly, just as we expect it to, but the cast and filmmakers have clearly given this their all and the musical’s big, vibrant beating heart is a testament to them all.

Bodega owner Usnavi (Anthony Ramos) is the popular and likable in his Washington Heights ‘hood. He saves every penny, and hopes to hit it big in the lottery, to fulfill his dream – take the money, move back to the Dominican Republic, open a beach bar and live the good life. But, life goes on and he must face his daily challenges, in song, “In the Heights.”

If I had to use on word to describe eclectic director Jon M. Chu’s wildly enthusiastic musical feature, it is “energy.” And there is a boat load of that from beginning to end in a series of big musical numbers, with multitudes of dancers, which come in almost machine gun enthusiastic frequency. They even pay homage to Busby Berkley and Esther Williams in an elaborate water ballet, including overhead geometric shots of the synchronized swimmers.

The story is, basically, about one man’s dream for a better life who does not realize that the life he has – with his love interests, family and friends all around him – is pretty darn good already. It takes the filmmakers almost two and a half hours to make that big reveal (that I knew was coming) but how we get there is a song and dance saturated musical that reminds me of “The Umbrellas of Cherbourg” and a bunch of Michael Jackson videos. I had fun, though the heart and soul of the story is taken away with a tragedy.

Warner Brothers opens "In the Heights" in theaters and on HBO Max on 6/11/21.