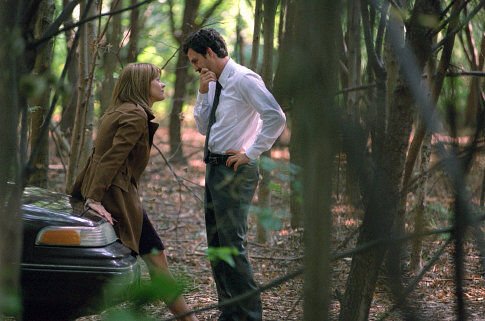 NYC High School teacher Frannie Avery (Meg Ryan) meets a student, Cornelius (Sharrieff Pugh, "Copland"), in a bar to get tips on Black (mostly sexual) slang for a book she's working on. Making her way down to the basement restrooms she spies a man with a three of spades tattoo on his wrist being orally pleasured by a woman with long, blue fingernails. She stands in the shadows to watch. The next day, Frannie receives a visit from homicide Detective Malloy (Mark Ruffalo, "My Life Without Me"), investigating the murder of Angela Sands, whose head was found in the garden beneath Frannie's window. An erotic charge passes between the two, but their relationship begins with a lie when Frannie does not admit to having gone downstairs the day before to the cop with the three of spades emblazoned on his wrist in cowriter (with novelist Susanna Moore)/director Jane Campion's ("Holy Smoke") "In the Cut."

Arriving on a wave of publicity because of Ryan's first nude appearance in steamy sex scenes with costar Ruffalo, "In the Cut" offers nothing more except for a fabulous performance by Ruffalo in a thoroughly disastrous film. This movie can only be described as the cheesiest of serial killer beach reads given the gloss of art house pretension. Campion and Moore offer up a dowdy teacher drawn to a dangerous side of erotica a la "Looking for Mr. Goodbar." Frannie's only close friend is her half-sister Pauline (Jennifer Jason Leigh, "The Anniversary Party"), an almost unbalanced unlucky in love type who lives over The Baby Doll Lounge strip club (it is unclear whether she also works there) while yearning for love and marriage. Pauline presents Frannie with a 'courtship fantasy bracelet, with baby carriage and heart charms, the first of countless marital symbols that mount up to increasing silliness. Pauline encourages Frannie to meet Malloy for a date and dolls her up in her own stripper clothes. Frannie is both excited and shocked by Malloy's frank sexual talk, but when his partner, Detective Rodriguez (Nick Damici), joins them and makes more explicit comments, Frannie quickly departs. She's attacked by a masked man near her home, but escapes. Malloy shows up later and gets Frannie to recreate the crime before the two fall into bed. The next day Frannie's ex, John Graham (Kevin Bacon, "Mystic River"), a man on the verge of a nervous breakdown, accosts her outside a cafe. Just to up the suspect quotient, Frannie's student Cornelius shows her his project - a blood-splattered paper defending the innocence of clown killer John Wayne Gacy. As more murders take place, Frannie becomes more convinced that Malloy is the killer. "In the Cut" slaps its audience with so many shameless red herrings they may begin smelling the aroma of a fish processing plant. In addition to the ludicrousness of the story, whose heroine wears sensible sandals and corduroy skirts while chatting with transvestite strip club bouncers, none of the characters seem capable of speaking to each other with dialogue that remotely sounds real. It's all so much stylized garbage. Campion unwisely repeats her "Portrait of a Lady" insert device - here a period melodrama that looks like Guy Maddin shooting a Hallmark ad - to fill a backstory about Frannie and Pauline's serial bridegroom father's courtship of Frannie's mother on an ice skating pond. (His blade makes the blood red cut for the title sequence and later becomes the weapon that decapitates women in Frannie's nightmares.) Ryan succeeds in shedding her romantic comedy image, but replaces it with nothing. Her character is a mousy blank, unserved by the story. Jason Leigh fares a little better through force of personality and Pugh has presence as the student with a crush. Bacon is forced to walk city streets in scrubs declaring himself insane and Damici is an oily mix of romance and machismo. Ruffalo gives possibly his best performance, though, in this sorry film. He's exciting and real, with the crime weary sensibilities of a homicide cop making his frank sexual urgency believable. Technically, the production is given an appropriately edgy, grimy, yet dreamlike feel by director of photography Dion Beebe ("Chicago") and editor Alexandre de Franceschi ("Praise"). Campion uses them best in the before credit title sequence, when Pauline drinks coffee in Frannie's garden as petals swirl down and a neighbor performs Tai Chi all accompanied by an atonal cover of 'Que Sera Sera.' Unfortunately, it is all downhill from here.