In Search of the Great Beast 666 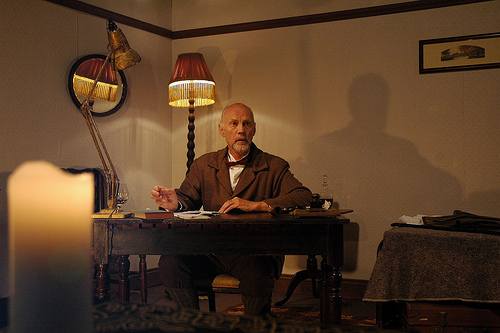 During the earlier 20th century, Aleister Crowley was infamously known as “The Wickedest Man In The World.” He was an occultist, accomplished mountaineer and spy (among other things) and had connections to Winston Churchill, Adolph Hitler and the notorious Jack the Ripper. Crowley also delved into dark magic in his quest for knowledge and power. His bizarre life is studied by documentary filmmaker in the DVD release of “In Search of the Great Beast 666.”

From the Disinformation Company, who have released "2012: Science or Superstition," "9/11 Press for Truth" and "Outfoxed: Rupert Murdoch's War on Journalism," comes July 2009 DVD release "In Search of the Great Beast 666," a 125 minute documentary on 'the wickedest man in the world' Aleister Crowley, the man largely considered the founder of modern day witchcraft. Stories about Crowley abound, and, after a recent viewing of "Rosemary's Baby," the subject seemed worth exploring. The DVD promises links from Crowley to the likes of Hitler, Jack the Ripper and even George Bush. But rather than going with a standard documentary format, the filmmakers here use actors depicting Crowley and many of the important people in his life simply sitting in period garb and set addressing the camera like waxworks tableaux. These 'interviews' are intercut with sepia toned graphics which envelop still photographs as British actor Joss Acklund ("Lethal Weapon 2's" South African bad guy) narrates. The result is so incredibly stodgy, the sensational subject matter is rendered mostly dull. This is also because the narrative spends an undue amount of time on Crowley's political maneuverings in attaining a high level within The Golden Dawn Society despite the objections of such other illustrious members as Irish writer William Yeats. Those looking for more salacious storytelling will have to be satisfied with the surprising yet unsubstantiated connection between Crowley and Jack the Ripper. His whispered about manse on the banks of Loch Ness, Boleskine, is covered with a description of its layout and a couple of anecdotes. The '666' of the title isn't referenced, although we are told Crowley once lived at 6769 Chancery Lane with no mention of the satanically-tinged address. Could it be that the notorious Crowley was duller than his legend? The man was a poet (albeit usually a pornographic one), rock climber and practitioner of Yoga, but as far as actual Devil Worship we only hear rumors. Crowley deserves the Ken Russell treatment. This documentary provides loads of biographical info, but saps the juice out of its subject. The DVD contains no extras.

Narrated (rather dully) by actor Joss Ackland, this is an overlong documentary that makes monotonous what should have been interesting and shocking. Director Robert Garofalo chronologically tells the life story of Crowley from his strict Christian upbringing under the hand of his father who forbids celebrating even Christmas. After his father’s death, Crowley broke away from his ties to the family religion and became a nonconformist. With his enlightenment to the ways of the world, Crowley traveled the continents seeking knowledge and, with it, power through the occult. His appetites to bi-sexual decadence, even depravity, became notorious. His exciting exploits as a mountain climber and international spy and his stature as a poet and writer, combined with his dabbling into dark magic, provide interesting fodder for the doc but it is the execution that fails. Using a combination of dramatic reenactments and staged interviews with Crowley and colleagues, the telling of Crowley’s life is stodgy, at best, and boring, at worst. These ponderous faux interviews could have been eliminated or incorporated as narration for the reenactments. At the very least, some vigorous editing would have helped to cut this down from its snooze-inspiring 125 minutes. Techs are on par with the overall production, doing nothing special to spice up things. (With the fascinating source material, this tome should not have required to be spiced but, alas, it does.) This DVD release contains only the feature length documentary and nothing else. An Aleister Crowley music video would have been a plus.