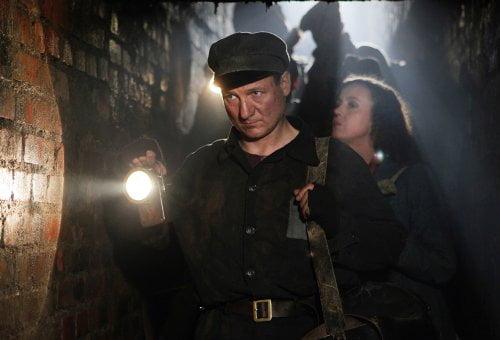 Lvov, Poland, 1944. The Jewish population is rounded up into a walled ghetto separating them from the Poles and German soldiers outside. The Nazis begin to empty the ghetto and ship its inhabitants to certain death in the dreaded concentration camps. One small group, before they can be deported, enlists the help a Ukrainian thief and sewer worker who leads his wards to safety “In Darkness.”

Leopold Socha (Robert Wieckiewicz) is a petty thief whose knowledge of the sewers for hiding stolen goods employs him legitimately as a sewer worker. Still, in the waning days of WWII, he looks for opportunities wherever he can. When he discovers that some of the Jews of the Lvov ghetto have broken through to his subterranean tunnels, he negotiates with professor Ignacy Chiger (Herbert Knaup, "Run Lola Run") to help hide them for a fee. What follows is 14 months of nerves for Socha and a hellish existence for those who live "In Darkness." Polish director Agnieszka Holland ("The Third Miracle," TV's 'The Killing,' 'Treme') instructed her editor to let her film run long so as to impart the experience of her subject to her viewers. At 145 minutes, though, her film becomes a bit of a slog. We've seen this movie, if not its particulars, before. That said, Holland's production is beautifully crafted - director of photography Jolanta Dylewska ("Tulpan") and production designer Erwin Prib ("Absurdistan") ensure that we do indeed feel what it's like to live in dark, cramped quarters perpetually challenged by water, rats and exposure - and David F. Shamoon's adaptation of the Robert Marshall book retelling of the true story boldly creates both saviors and survivors as flawed people. This was Poland's submission for the Foreign Language Oscar and is one of the five films to be nominated. Holocaust films come in two flavors - those from the point of view of the persecuted and those from the point of view of those who risked their lives to save them (oddly, the latter never receive the criticism that films which depict Caucasian heroes fighting against racism do). This film is a bit of a hybrid as the action does not remain continuously on Socha, although he has the dramatic character arc. He's introduced as an equal opportunity type of chiseler, caught by some Nazi youths as he tries to rob their home. His friendship with a local high ranking officer, Bortnik (Michal Zurawski), offers some level of protection, but suspicious eyes are everywhere. Family man Socha's single partner Szczepek (Krzysztof Skonieczny) is awfully wary about hiding the Jews, but Socha's greed rules the day. Besides the professor's family, they lead down a very untrusting Mundek Margulies (Benno Fürmann, "North Face"), Klara Keller (Agnieszka Grochowska) and her hysterical sister, Yanek Grossmann (Marcin Bosak), who's left his own wife and daughter behind in the ghetto in favor of his lover Chaja (Julia Kijowska), and several others including young children. Socha's declaration that only 10 of them can really be hidden begins a class war amidst the group below ground and his purchases for them at the butcher shop provoke comments on his new found prosperity above. Socha's wife Wanda (Kinga Preis) has liberal, humanitarian views (her comments about Jesus's Jewishness startle her husband and stretch credibility). Bortnik hears rumors and asks his friend to assist him in a search of the sewers, a tense scene. Szczepek abandons Socha and, unable to withstand the pressure, Socha informs the group, whose money is gone, he won't be coming back. But when he crosses paths with one of them above ground and abets his killing of a Nazi soldier, he's drawn back in, and for a higher cause than his bankbook. He also pays an unexpected price. Considering the film's lengthy running time, it is occasionally narratively abrupt (Socha's culling of the group to 10 seems to come out of nowhere, as does Wanda's change of heart about aiding Lvov's persecuted) when it's not involving us in an endurance test. Dylewska's work is always engaging, though, using enough light to allow us to follow the action yet always be mindful of the dark, dank conditions. Occasionally he creates beauty out of ugliness, such as a shot of Socha departing the tunnels, but he and Holland also accentuate gore in some scenes of violence and one of underground childbirth. Holland imparts more of a chill with the blood on shawl scavenged from the deserted ghetto by Szczepek as a gift for his girlfriend. But she also hits us over the head with a cliched moment of hope when one of the little Jewish girls sings. "In Darkness" is an admirable film, yet one more tale of heroic risk and grueling survival from the Holocaust. But despite its pedigree, it has nothing new to say on the subject, no relevancy to today other than that old adage of not forgetting the past lest it repeat itself.

Director Agnieszka Holland brings us the true life story of a man called upon to saves the lives of Jewish survivors by hiding them in the sewers under Lvov. At first, Poldeck (Robert Wieckiewicz) is only in the saving game for the money. He leads his wards through the dank, rat-infested sewers to the relative safety beneath the city. The sounds of the battle can be heard, even deep within the bowels of the earth, and all know the fate of those above. Months pass and the money begins to run out but Poldeck’s humanity is far stronger than his greed as he risks his own life to protect those scrabbling to survive down below. The claustrophobic sewers are in total darkness but for Poldeck’s powerful flashlight and Holland does an outstanding job of conveying the terror of the Jews fearing discovery at any minute. The director makes you imagine just how vile the stench of the sewers is, especially from the dead bodies floating by - the dead victims of the Nazi murderers. This is a harsh film but one that also gives hope in our fellow man. At 145 minutes it is too long and could use some trimming. But, it’s hopeful heart is in the right place.