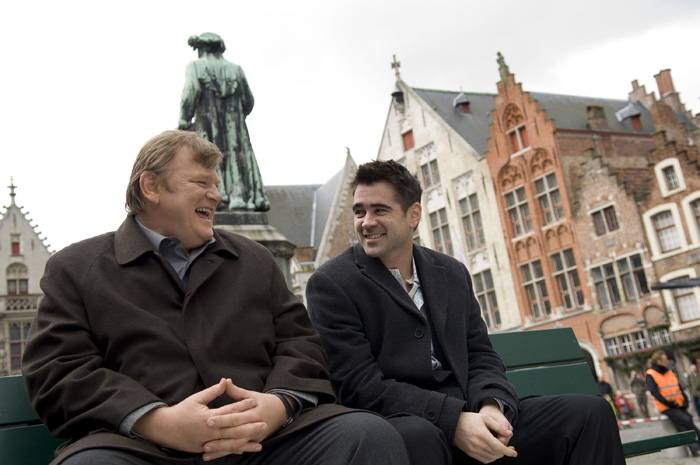 Two hit men from Dublin, Ray (Colin Farrell) and Ken (Brendan Gleeson), are ordered by their boss, Harry (Ralph Fiennes), to cool there heels in the beautiful medieval Belgian city of Bruges (pronounced “bruuzh”). Ken loves the opportunity to explore the fairytale town but Raymond thinks the place is a s**thole. Their lives irrevocably change in unexpected directions as personal and professional relationships change their hearts and minds after their arrival “In Bruges.”

After a botched job, boss Harry (Ralph Fiennes, "Harry Potter's" Lord Voldemort) orders his two hit men out of the country to await his instructions. Ken (Brendan Gleeson, "Harry Potter and the Order of the Phoenix") is delighted by their destination and slides right into the role of sightseer, but his young recruit Ray (Colin Farrell, "Cassandra's Dream") pines for London pubs and fast food, frustrated and underwhelmed to find himself "In Bruges." I simply loved this movie. Writer/director Martin McDonagh (Oscar winner for 2004 live action short "Six Shooter") has created something tonally unique, a film that is hilarious and tragic, irreverent and wistful, peopled with characters learning to love life with death all around them. I never understood the cult of Colin Farrell, but after "Cassandra's Dream" and now this, he has become an actor of true depth and range. 'After I killed them, I dropped the gun in the Thames and washed my hands in a Burger King and waited for instructions,' Ray tells us in voice over, setting a gloomy, serious tone that is promptly depth-charged when we meet him and Ken. Firstly, Ray is horrified to discover he will be sharing a room with Ken in a charming inn run by the very pregnant and lovely Marie (Thekla Reuten, Oscar nominated Foreign Language Films "Everybody's Famous!" and "Twin Sisters") who assures them nothing else is available. Secondly, while Ken is delighted to look at all the 'lovely old buildings,' visit churches and sample the local lager, Ray is convinced Bruges is a 'sh*%hole,' a boring backwater where beer is served in 'fag' glasses. Here is a buddy film with real possibilities, but "In Bruges" is so much more. After barely bearing a canal boat tour and getting into a serious scuffle with some overweight American tourists he insults during the day , Ray convinces Ken to go out at night even though they are supposed to wait in their room for Harry's possible call. After a good meal and many beers, the duo come upon a brightly lit plaza. 'They're filming midgets!' Ray squeals with childish delight, then sets eyes on Chloë (Clémence Poésy, "Harry Potter and the Goblet of Fire") and falls instantly besotted. Suddenly Bruges may not be so bad after all. To say much more about "In Bruges" would spoil the experience, but suffice to say that McDonagh does indeed weave in a dwarf, Jimmy (Jordan Prentice, "Weirdsville," "Harold & Kumar's" Giant Bag of Weed), who films dream sequences at night and indulges in a serious drug habit all the rest of the time. He also becomes the representation of the film's central tragedy, which, when revealed, gives far deeper layers to Ray and his relationship with Ken. McDonagh's brilliant screenplay works on many levels, including a religious one that would cast Harry as God the Father, Ken as Jesus, Marie as the Virgin Mary (her husband is referred to, but never seen) and Ray as the sinner. Bruges is heaven for Harry and Ken, but hell, or is it purgatory, for Ray. Dreams and waking, life and death, the appropriateness of Canadians over Americans, the paintings of Hieronymus Bosch and the fine differences between alcoves and nooks and crannies all work into the mix. McDonagh is able to summon volumes about the human condition with one shot of an exceptionally ugly dog sitting with its master on a public bench. McDonagh's cast is extraordinary. Farrell is crude, funny, violent, tortured and endearing, a man trying to obliterate a horrible guilt with substance enhanced partying and out of control behavior. Gleeson is the calming factor, a man approaching retirement, contented with the small things, a fatherly influence on Ray. It is a great pleasure not to know who is cast as Harry, who we hear as a nostalgic but blisteringly frank vulgarian on the phone, a man who could turn out to be Ben Kingsley's Don Logan, but instead turns out to be an actor we generally expect as the picture of refinement. Every supporting role has also been cast with great precision from Prentice's matter-of-fact small actor who rants about race wars when strung out, to Jean Reno lookalike Eric Godon's Yuri, the local arms and antiques dealer who obsesses with the local architectural recesses. Jérémie Renier ("L'Enfant," "Atonement") is the cowardly tough guy who runs in with Ray over his girl. Fiennes and Gleeson's "Harry Potter" costar Clémence Poésy is an intriguing presence as the bad girl who could be good for Ray while Thekla Reuten projects a beatific glow as the maternal innkeeper. Mark Donovan ("Shaun of the Dead") and Zeljko Ivanek (TV's "Damages") are the American and Canadian tourists incensed with Ray's behavior. The production is glorious (Michael Carlin, "The Last King of Scotland") , turning Bruges into the fairy tale it's often compared to (the Flemish city is sure to see an upswell in tourism as a result of this film). Eigil Bryld ("Kinky Boots," "Becoming Jane") often shoots with angles to match his subjects with Bruges's architecture and his night lighting cannily replicates the out of focus blue and gold spots of distributor Focus Features' logo. Original Music by Carter Burwell ("No Country for Old Men") reflects the myriad tonal qualities of the film and its location beautifully.