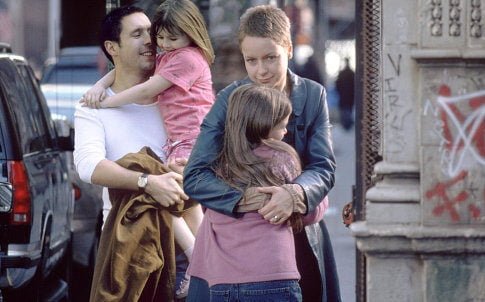 Sarah (Samantha Morton), Johnny (Paddy Considine) and their two young daughters, Christy (Sarah Bolger) and Ariel (Emma Bolger) are crossing the border from Canada to the US. Dad admonishes the girls, ”Remember, we’re here on holiday.” When the customs official questions the family, Ariel brightly states, “We’re here on holiday…and my da’s out of work!” while Christy wishes upon her dead brother, Frankie’s, soul that they get into the Promised Land. Thus begins a new life for a plucky little family that only wants to live “In America.”

They find a place on Manhattan that is barely a step up from a crack apartment building. But, Ariel could charm Midas out his gold and the family soon establishes a presence in the neighborhood. Johnny, an aspiring actor, spends his time auditioning for any kind of role he can get. He also drives a cab to eke out a living. Sarah gets a job at the ice cream parlor, called Heaven, across the street. Somehow, with a little luck, they get by. They also have a reclusive neighbor who, for reason’s unknown, screams at the top of his lungs. Time goes by and Halloween arrives, introducing the girls to the American tradition of Trick or Treat. Christy dressed as autumn, and Ariel a little angel, go from door to door in the building (under their father’s secretive watchful eye) shouting out “trick or treat!” but not a soul answers. When they get to the door of the Screaming Man (Djimon Hounsou), knowing he is home, they pound and pound until, angered, he flings it open. The tall, physically imposing black man does not intimidate the fearless youngsters and he is soon charmed by their forthright innocence and intelligence. Soon, they draw him, Mateo, into the family though Johnny is a little bit jealous of the ready friendship that develops between Sarah and the girls’ new buddy. Meanwhile, Sarah gets pregnant but, as she comes to term, they learn that both she and the baby are in danger. Helmer Jim Sheridan co-wrote this family tale with his daughters, Naomi and Kirsten, and the film is dedicated to the memory of Frankie Sheridan so, presumably, much of the emotion of “In America” is based on the scripters’ own personal loss. The death of the family’s beloved son and brother remains an edgy undercurrent through the film and an issue that Johnny and Sarah must come to grips with. Christy, on the other hand, believes that her lost brother’s spirit has granted her three wishes and, if she uses them correctly, they will mend the family’s grief. Paddy Considine first came to my attention with his terrific performance as a kind hearted jack-of-all-trades in the woefully under-appreciated 2000 film “Last Resort.” The actor gives full dimension to Johnny as he heads his little family in the challenge of surviving in America. He would like to be hired as an actor but competition and practicality force him to earn a living to make a home for Sarah, Christy and Ariel. Considine gives a full range of emotions from love to humor to jealousy to grief, and more, to Johnny, making you root for the guy. Samantha Morton has a tough role as Sarah. She is the quiet, stoic one who has kept, to herself, the grief over the loss of her son during a long illness following a fall down the stairs – there is always a question as to blame, if any, for the accident. The actress gives a subdued performance until the end, when the dams of emotion burst. The sisters who play the sisters, Sarah and Emma Bolger, too, fully develop their charming, wise and innocent characters and are the central spark to “In America.” Kids in films fall into two basic categories – those that can act and have a natural presence on the screen and those that are there to fill a requisite kid space. The Bolger sisters are definitely of the former variety and are both wonderful as Christy and Ariel. Little Emma is particularly notable as a child wise beyond her years. She works particularly well with Djimon Hounsou as that actor plays a dying artist – I think this is set during the AIDS years but it is a little hard to tell – who is deeply tormented but finds comfort in the tiny family that adopts him as one of their own. Jim Sheridan keeps things moving briskly as the story spans a number of seasons and we get to watch the family grow and adapt, facing any crisis that comes long with as much humor and good-will as can be mustered under tough circumstances. Cinematographer Declan Quinn keeps things tight with frequent close ups of the attractive cast. Costume designer Eimer Ni Mhaoldomhnaigh does a particularly nice job with the girls, especially their Halloween costumes. Production designer Mark Geraghty keeps a feel of Ireland in the set and creates diverse worlds from John and Sarah’s bright and clean apartment to the rundown condition of their building. “In America” is a warm family tale that has the heart to become an annual holiday viewing. The strong performances by all, the well-structured script and the deft hand of Sheridan make it a pleasure.