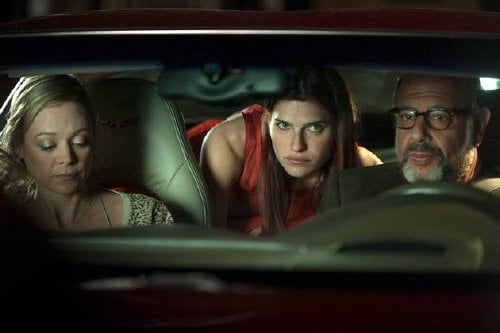 Carol Salomon is an under-ambitious vocal coach who has lived in the shadows (and the home) of her dad, Sam (Fred Melamed), the current master of the movie trailer voiceover. When his much younger girlfriend, Jamie (Alexandra Holden), moves in, Sam unceremoniously throws his daughter out. This shakeup in her life proves to be for the good as she decides to pursue a career of her own in the voiceover biz and earn the right to say the words “In a World….”

Carol's (Lake Bell, "It's Complicated," TV's 'Childrens Hospital') always dreamed of going into the male ruled movie trailer voice over business that her dad, Sam Soho (Fred Melamed, "A Serious Man"), has dominated ever since the death of Don La Fontaine. When she unwittingly snatches a coveted job from her father's protege Gustav (Ken Marino, TV's 'Childrens Hospital,' "We're the Millers"), Sam throws his hat in the ring too, making Carol fight to be the first female voice to intone La Fontaine's infamous catchphrase "In a World..." Actress Lake Bell won the Waldo Salt Screenwriting award at the 2013 Sundance film festival for this, her feature writing and directing debut, and while stronger films have emerged from that festival, it's easy to see why this was a favorite, especially for its writing. Bell has targeted a microcosm of the industry she works in and mixed in romantic comedy and family drama elements all while maintaining focus on her throughline and hilariously showcasing her own talent for mimicry. Carol's old man, is too competitive to be supportive and, having found a girlfriend his daughter's age, announces he'll no longer support her financially as Jamie (Alexandra Holden, TV's 'Rizzoli & Isles') is moving in. Still trying to cobble a living together, Carol moves in with her sister Dani (Michaela Watkins, HBO's 'Enlightened') and brother-in-law Moe (Rob Corddry, "Warm Bodies"). A call from Louis (Demetri Martin) with a job to help Eva Longoria (good sport) stop from sounding like 'a retarded pirate' while playing an Irish maid leads to Carol's big break when an engineer needs a temp voice track for a trailer for the first of a "Hunger Games"-like 'quadrilogy.' The producer loves the product so much, Carol's told she's got the job. What she doesn't know is that Louis is carrying a torch for her and he fumbles asking her to a voice cast party. Carol's already going and ends up hooking up with the host, Gustav, when she finds a secret panel to his 'private room.' Meanwhile, Moe has a "Seven Year Itch" moment when neighbor Pippa (Talulah Riley, "Pirate Radio") asks to use the shower and Dani goes too far when interviewing an Irish hunk (Jason O'Mara) at the behest of her sister to study his accent. Bell's got a great ear for witty dialogue that still feels utterly natural coming from her unique cast of characters. Upon learning that Jamie's moving in with dad she tells Dani 'she smells like lifesavers and has a Midwestern accent unironically.' Louis begins acting crazy on the street to get Carol's attention, calling the device 'positive roadblocking.' Character defining details abound too, like Dani's love for her husband's 'sandwich bar' or Sam's ANUNC8 license plate or the different techniques used for vocal exercises. Bell nails the desperation of a thirtysomething still trying to find her way and she and Watkins really feel like sisters, especially when sharing their disgust over dad's behavior and the young women who find him sexy. Melamed wields his mellifluous voice like proof of superiority while ostensibly soothing his daughter's worries (and has no qualms showing off his furry exterior in a steam bath scene). The movie also features comedienne Tig Notaro, 'Parks and Rec's' Nick Offerman, Geena Davis and Jeff Garlin as himself. When it's finally unveiled, watch for an uncredited Cameron Diaz in that much discussed trailer. "In a World..." is funny and heartfelt but best of all, it's a 'workplace' comedy not constrained by a literal workplace where the minutiae of a niche industry are worked every which way by a filmmaker to watch.

They find a place on Manhattan that is barely a step up from a crack apartment building. But, Ariel could charm Midas out his gold and the family soon establishes a presence in the neighborhood. Johnny, an aspiring actor, spends his time auditioning for any kind of role he can get. He also drives a cab to eke out a living. Sarah gets a job at the ice cream parlor, called Heaven, across the street. Somehow, with a little luck, they get by. They also have a reclusive neighbor who, for reason’s unknown, screams at the top of his lungs. Time goes by and Halloween arrives, introducing the girls to the American tradition of Trick or Treat. Christy dressed as autumn, and Ariel a little angel, go from door to door in the building (under their father’s secretive watchful eye) shouting out “trick or treat!” but not a soul answers. When they get to the door of the Screaming Man (Djimon Hounsou), knowing he is home, they pound and pound until, angered, he flings it open. The tall, physically imposing black man does not intimidate the fearless youngsters and he is soon charmed by their forthright innocence and intelligence. Soon, they draw him, Mateo, into the family though Johnny is a little bit jealous of the ready friendship that develops between Sarah and the girls’ new buddy. Meanwhile, Sarah gets pregnant but, as she comes to term, they learn that both she and the baby are in danger. Helmer Jim Sheridan co-wrote this family tale with his daughters, Naomi and Kirsten, and the film is dedicated to the memory of Frankie Sheridan so, presumably, much of the emotion of “In America” is based on the scripters’ own personal loss. The death of the family’s beloved son and brother remains an edgy undercurrent through the film and an issue that Johnny and Sarah must come to grips with. Christy, on the other hand, believes that her lost brother’s spirit has granted her three wishes and, if she uses them correctly, they will mend the family’s grief. Paddy Considine first came to my attention with his terrific performance as a kind hearted jack-of-all-trades in the woefully under-appreciated 2000 film “Last Resort.” The actor gives full dimension to Johnny as he heads his little family in the challenge of surviving in America. He would like to be hired as an actor but competition and practicality force him to earn a living to make a home for Sarah, Christy and Ariel. Considine gives a full range of emotions from love to humor to jealousy to grief, and more, to Johnny, making you root for the guy. Samantha Morton has a tough role as Sarah. She is the quiet, stoic one who has kept, to herself, the grief over the loss of her son during a long illness following a fall down the stairs – there is always a question as to blame, if any, for the accident. The actress gives a subdued performance until the end, when the dams of emotion burst. The sisters who play the sisters, Sarah and Emma Bolger, too, fully develop their charming, wise and innocent characters and are the central spark to “In America.” Kids in films fall into two basic categories – those that can act and have a natural presence on the screen and those that are there to fill a requisite kid space. The Bolger sisters are definitely of the former variety and are both wonderful as Christy and Ariel. Little Emma is particularly notable as a child wise beyond her years. She works particularly well with Djimon Hounsou as that actor plays a dying artist – I think this is set during the AIDS years but it is a little hard to tell – who is deeply tormented but finds comfort in the tiny family that adopts him as one of their own. Jim Sheridan keeps things moving briskly as the story spans a number of seasons and we get to watch the family grow and adapt, facing any crisis that comes long with as much humor and good-will as can be mustered under tough circumstances. Cinematographer Declan Quinn keeps things tight with frequent close ups of the attractive cast. Costume designer Eimer Ni Mhaoldomhnaigh does a particularly nice job with the girls, especially their Halloween costumes. Production designer Mark Geraghty keeps a feel of Ireland in the set and creates diverse worlds from John and Sarah’s bright and clean apartment to the rundown condition of their building. “In America” is a warm family tale that has the heart to become an annual holiday viewing. The strong performances by all, the well-structured script and the deft hand of Sheridan make it a pleasure.