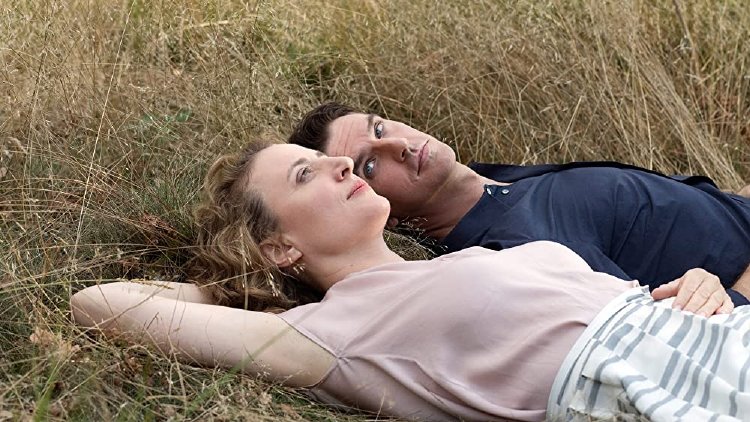 Needing research funding, single scientist Alma (Maren Eggert, "The Experiment") agrees to test an android, whose algorithms are designed to make it her perfect life partner, for three weeks in her home.  At first Alma is slightly unsettled, but amused, but as Tom (Dan Stevens, TV's 'Legion,' "The Guest") adjusts himself to her interests and her moods, Alma begins to question everything in “I’m Your Man.”

If cowriter (with her "Stefan Zweig" collaborator Jan Schomburg)/director Maria Schrader’s (Netflix's 'Unorthodox') adaptation of an Emma Braslavsky short story sounds familiar, you may be thinking of such films as “Making Mr. Right” or “Ex-Machina.”  But although “I’m Your Man” shares DNA with these films, it also has something a little different on its mind.  This German film from a female perspective is about self discovery.

The film’s premise is introduced in comical fashion, Alma invited to a dance club to meet Tom.  His perfect answers to all her questions surprises her, but he breaks down on the floor, signaling to those who haven’t already guessed that he’s a machine.  ‘You’ve no idea how difficult it is to program flirting,’ Alma’s told by her host (“Toni Erdmann’s” Sandra Hüller), assuring her he will be ready for her to take home in short order.  Waving her arm at the other dancers, she confides ‘Holograms – they’re cheaper and they dance longer,’ with such a conspiratorial grin, we realize that she, too, is flirting, if only in a business sense.

The serious minded Alma returns and amuses herself while she waits by waving her arms through the realistic holograms like a kid in a candy store, at least until she hits something solid – Tom’s back.  On the drive to Alma’s apartment, he sounds like a mansplainer, but he’s adjusted himself enough by the time they enter to admire her artwork, an act both complimentary and inviting.  Alma, who’s already decided to do the minimum required to collect her fee, resists.  When she shows him his ‘room,’ obviously a storage closet, he seems honestly surprised they won’t be sleeping in the same bed.

This is a thoughtful comedy, Schrader allowing situations to settle and expand rather than hitting us over the head with them.  Take, for example, the sexual tension which arises every time Alma runs into Julian (Hans Löw, "Toni Erdmann"), who is eventually invited in for a drink by Tom while Alma’s in the shower.  We may think we know where this is going, but we’d be wrong.  (It does allow for one of Stevens’ funniest line deliveries when he announces ‘I’ll just spring into my trousers.’)  The specter of sex with a robot hovers over the proceedings and it feels like it might send the film off the rails should it occur, but once again Schrader makes the right move.

Eggert and Stevens are a unique pair, she an intellectual resisting the emotional manipulations of code in an attractive package, he achieving just the right note of ‘offness’ by being a non-native German speaker (this is also worked into the plot just so).  Stevens work here is both sly and embraceable, exactly what the role calls for while Eggert becomes increasingly dreamy and romantically nostalgic.   And just when we think we might be heading towards a traditional ending, Schrader throws out a moral curveball that pulls the rug out from beneath both her characters.  “I’m Your Man” is a romantic comedy that dodges all the usual clichés.

Alma (Maren Eggert) is an archaeologist in need of funding for her study of Sumerian cuneiform. To make extra cash for her project, she agrees to do a three week evaluation of a humanoid robot designed to make her happy in “I’m Your Man.”

I found out that I was going to see a German sci-fi flick about a robot designed to make its human happy as I watched to opening credits roll. My first thought was: A German science fiction movie? The last one may have been “Metropolis (1927),” I think. (If you know of others, let me know.)
Things begin in what looks like a posh speakeasy with people having a good time laughing, drinking and dancing. Alma enters the place and sees, across the dance floor, Tom (Dan Stevens), a handsome and debonair man.

Tom, it turns out is the humanoid robot that Alma is supposed to evaluate over three weeks of daily contact with him. Of course, she knows he is a robot and is immediately uncomfortable with him, especially his straightforward candor and desire to please her.

You kind of know where this near-future tale will go but, at its center, it is a romance between two “species“- man and machine. But, there is more to this than just sci-fi and robots. There is a morality play going on as to what makes a human a human. Is it the flesh and blood or is it about a being that can think, learn and change? The question comes down to: what is it that makes a person a person? Good question.