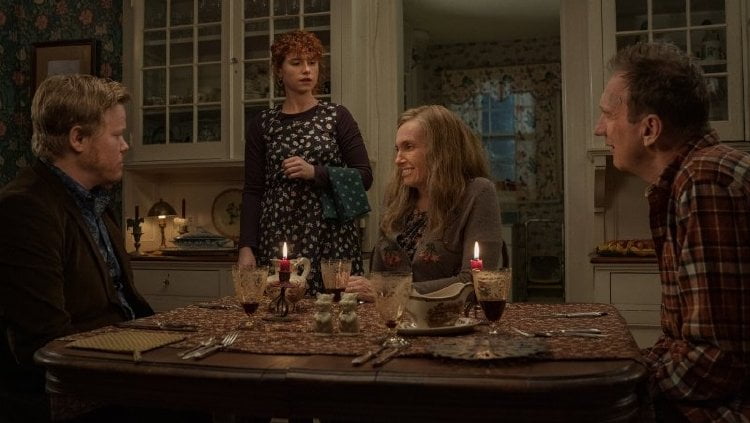 As a young woman (Jessie Buckley) drives with Jake (Jesse Plemons, recalling Philip Seymour Hoffman here), her boyfriend of six weeks, to meet his parents at their farmhouse, we are struck by their intellectually curious and literary conversation.  These two have such odd interests, they seem well suited, yet we are privy to the woman’s thoughts of doubt and how too many stay in moribund relationships out of inertia.  She tells us - but not him - “I’m Thinking of Ending Things.”

After writing for such directors as Spike Jonze (“Being John Malkovich,” “Adaptation”) and Michel Gondry (“Eternal Sunshine of the Spotless Mind”) Charlie Kaufman wrote the screenplays for his own first two directorial efforts, "Synecdoche, New York" and "Anomalisa."  His third film finds him adapting Iain Reid’s ‘unfilmable’ award winning debut novel and yet it is unmistakably Kaufman, his themes of identity, depression and doomed relationships now literally shrouded in death.

After picking up the girl with the homespun chic wardrobe (which will subtly change throughout the film, as will her give profession), crinkly smile and curly red hair from a retro chic Main St. in softly falling snow, Jake will try to engage her in a discussion of Woodsworth and Rodgers & Hammerstein’s ‘Oklahoma!,’ a musical celebrated annually at his hometown high school (Kaufman will cut to the school’s Janitor (Guy Boyd) throughout leading up to his finale).  Tugging at her thought strings, Jake finally gets his girlfriend to recite some of her work (Kaufman’s friend Eva H.D.’s unpublished poem ‘Bone Dog’), a chilling bleak piece which he enthusiastically declares could have been written about him.

If she was reluctant to share her work, he seems to become increasingly reluctant to actually see his parents, declaring he’s ‘not ready to go in yet,’ after they pull up outside of the Oklahoma farm house in bitter cold and blustery snow as his mother (Toni Collette) waves from an upstairs window.  He takes her to see the sheep, which she finds depressing and odiferous.  Even worse, three lambs lie dead, frozen to the floor.  She learns the pigs are gone because after neglecting them for a few days, his father discovered they were being eaten alive by maggots.  Cheery!

Once inside, Jake insists she wear his oversized slippers, puts on some music and fusses over a fire as his parents take a mysteriously long time to come down from upstairs.  Her eyes dart about the fussily printed wallpaper and various tchotchkes as Jake darts about the house in his abrupt, staccato walk calling for his parents.  He admits to being afraid of the basement when she notices its door, disturbingly taped on one side and scratched on the other, which he attributes to the family dog. Jimmy arrives to repeatedly shake itself before abruptly disappearing while Jake shrinks away.  Then mom and dad (David Thewlis) are here, all gregarious anti-intellectualism, mom barking in exaggerated laughter.  Dinner, she tells her guest, has all come from this very farm.  Its centerpiece?  A ham.

The entire farmhouse sequence is increasingly weird, Jake’s parents morphing in age from young parents to dementia addled seniors, mom’s relationship with her son uncomfortably accusatory.  Perusing Jake’s childhood bedroom, his girlfriend will notice a thick compendium of Pauline Kael reviews and an urn with what appears to be Jimmy’s picture on it.  An opened book features her poem and a childhood picture he will claim as his own she believes to be her.  She keeps insisting they leave, the storm intensifying, while he keeps stalling, telling her he has chains for his tires.  Eventually they hit the road where her ‘conversation’ is all about the inflections in what otherwise is a recitation of Kael’s review of “A Woman Under the Influence.”  A stop at the old timey Tulsey Town Ice Cream Stand features Lynchian blonde twins and alarming matching rashes and results in Jake’s obsession with finding a waste bin to throw out their overflowing frozen treats.

Everything about that parental visit, one which posits mom and dad’s marriage as a happy one, equates relationships with death, the young woman’s discoveries in Jake’s room suggesting an eerie sense of identity subjugation.  Mom’s insistence that she take a grotesquely soiled flannel nightgown to the basement is one warped attempt at consummation.  It is not just Collette’s presence that renders this midsection so reminiscent of “Hereditary,” Molly Hughes’s ("The One and Only Ivan") production design and increasingly creepy family dynamics marking this as some kind of surreal nightmare.

Cinematographer Lukasz Zal ("Cold War") does beautiful work with the extended road trip sequences, casting Buckley and Plemons behind snow obscuring windows and windshield.  As Kaufman works toward his high school set finale, Zal captures a hallway set ‘Oklahoma!’ dance number, one which mimics the film’s relationship, with dynamic grace.  After his increasingly chilly and dread-inducing build, Kaufman gets a bit lost in the weeds working towards his finale, only to pull one back in with a ghostly high school gymnasium scene.  “I’m Thinking of Ending Things” features so many artistic references and so many fetishized objects within its surreal landscape, it is sure to offer more upon repeat viewings but only Charlie Kaufman may ever fully understand it all.