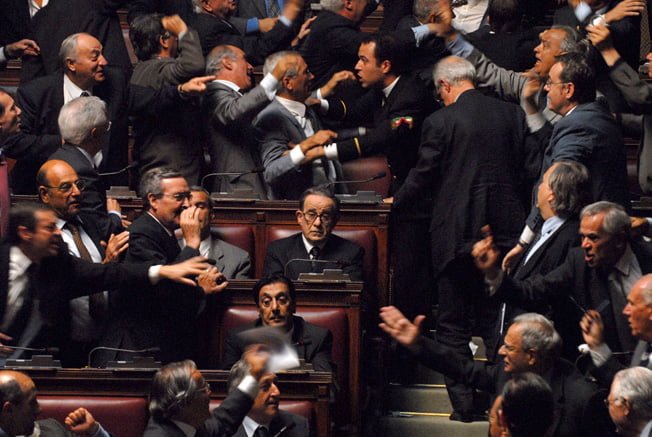 Italian Prime Minister Giulio Andreotti has served seven terms in Parliament and is the primo politico in a government system known for its volatile politics, corruption, bribery and Mafia ties. With his hunched posture, protruding ears and taciturn, sullen nature, Andreottii is the last man one would think of as the one of the most powerful men in Italy but he is “Il Divo.”

Writer/director Paulo Sorrentino, whose next project will be directing Sean Penn as a rocker, has taken decades of complex Italian political history and turned it into a stylized satire on the career of 'Senator for life' Giulio Andreotti, played by actor Toni Servillo who also had a prominent role in "Gomorrah," the other Italian film to split the country's Donatello awards. The film tells of the seven time minister, the man who was in office when Aldo Moro was kidnapped by the Red Brigade, and killed when the Government would not back down to their demands, and the man who was accused of having Mafia ties, via expository scenes of Andreotti with his circle (identified with Mafia-like monikers in subtitle), of him at home with his wife Livia, and of him addressing the audience and court which eventually acquitted him. The film is reminiscent of "The Godfather," not only for its subject matter, but for many scenes which are shot in the dark shadows Gordon Willis developed for Coppola's film. The soundtrack is thoroughly modern, hip and rocky, which collides with the story being told. Servillo's performance is also stylized, from the hunched stance which earned Andreotti the nickname "The Hunchback" (one of many) and which in one long shot makes him look like Nosferatu, to the obvious and folded down ears and deadpan deliverance of the many wisecracks which became famous. Do not resist "Il Divo" for its subject. Sure, attention must be paid because of the wide net Sorrentino casts, but no knowledge of Italian politics is necessary to get into this movie. Should you go into this movie with no knowledge of this slice of history, you'll not only learn something, but you'll be so entertained you may find yourself laughing out loud (when you're not shaking your head).