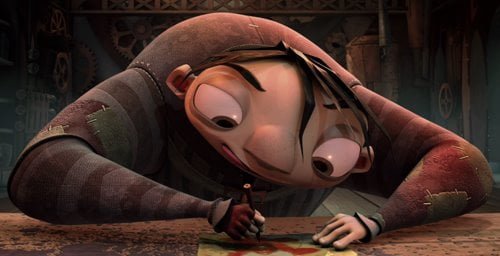 When you're born with a hump in the kingdom of Malaria, there's only one career path - a degree in "Yes, Master" to assist the evil scientists that keep King Malbert (voice of Jay Leno) on his throne. But one such lad has dreams of his own and does the unthinkable by creating life in the lab after his master, Dr. Glickenstein (voice of Monty Python's John Cleese), blows himself up. Now he just must keep from having his creation stolen by seventeen time Evil Scientist champ Dr. Schadenfreude (voice of Eddie Izzard, "Across the Universe"). Like every other assistant in Malaria, his name is Igor (voice of John Cusack, "Grace Is Gone," "War, Inc.").

MGM's "Igor," written by Chris McKenna (TV's "American Dad!") and directed by Anthony Leondis ("Lilo & Stitch 2: Stitch Has a Glitch"), owes many debts, from its "Nightmare Before Christmas" production design (King Malbert being a less inspired version of Halloweentown's Mayor) to an amalgamation of Bill the Cat, "Pinky and the Brain" and MST3K's gumball bot for the characters of Scamper (voice of Steve Buscemi, "Charlotte's Web") and Brain (voice of Sean Hayes, TV's "Will & Grace"), Igor's assistants. But "Igor" is too visually busy to be pleasing to the eye and lacks the wit needed in the creation of a fantastical locale. "Igor" appears to be aimed at children, who will not appreciate references to classic horror films from "Jeckyl and Hyde' to "The Fly," but doesn't have enough humor to keep older teens and adults occupied. It is merely a pleasant enough (for a film featuring body parts) good triumphing evil tale with nothing surprising about it. Igor does have some pleasures, beginning with the sidekicks. Brain, a brain that floats within a contraption that looks like a gumball container (on which he has misspelled his name as 'Brian' with indelible marker) on wheels with a rotating crab-like mechanical arm, is, of course, none too bright. Scamper, one of Igor's creations, is a suicidal cat with a metal cap that ensures it will stay alive who is drolly voiced by Buscemi. In the film's most inventive bit, the threesome take Igor's creation, Eva (voice of Molly Shannon, "Air Buddies," "Year of the Dog"), to the 'Brain Wash,' a business run like a car wash by a fly with a man's head assisted with his body and the insect's noggin. As Eva, who has proven she wouldn't even hurt a fly, is supposed to be evil, Igor chooses the 'axe murderer' option, but Brain muddles with the remote and flips her station to James Lipton's 'Inside the Actor's Studio. The result? Eva thinks she's an actress. While that's all very amusing, Eva has been rather clunkily conceived, a huge 'monster' with one oversized leg and arm and a disproportionately huge neck atop which is plopped a doll-like fact with huge eyes and the figure's one real inspiration, spider leg 'eyelashes.' And while Igor realizes he can enter Eva into the Evil Scientist competition by selling it to her as an audition, he doesn't dissuade her from choosing the musical "Annie" as the role she wishes to pursue, a conceptually funny idea that never works. Neither Cusack nor Shannon project much personality into their characters. Better are the villians, particularly the terrifically named Schadenfreude, a walk in the park for Izzard. Jennifer Coolidge ("Robots," "Legally Blonde") gets to outfit several characters as the shape-shifting girlfriend Jaclyn Schadenfreude sends out under different guises to steal ideas. Heidi (Jaclyn-Heidi, good joke) is who appears to try and seduce Igor and she is a much better realized character than Jaclyn, designed with loud, clashing colors and overly exaggerated features. Malaria's TV talk show host, Carl Cristall (voice of Arsenio Hall), is an invisible man who enjoys not wearing pants. "Igor" clearly had some ideas behind it but it just never comes together enough to delight.