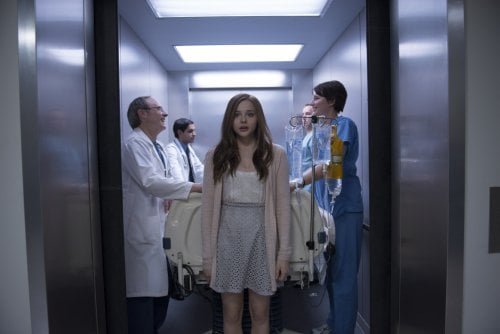 17 year-old cellist Mia Hall (Chloë Grace Moretz, "Kick-Ass") has just had the most incredible year and a half with her first and true love Adam (Jamie Blackley, "Snow White and the Huntsman"). But her acceptance into New York based Julliard and his budding rock stardom with his Portland, Oregon based band has caused a rift in the relationship - as her punk rocker mom Kat (Mireille Enos, TV's 'The Killing,' "Sabotage") tells her, she'll win with either choice she makes, but will also lose. Then a family drive turns tragic and as Mia's life hangs in the balance, she must contemplate what it will mean "If I Stay."

I haven't read Gayle Forman's 2009 YA novel, but at least as it's been adapted by screenwriter Shauna Cross ("What to Expect When You're Expecting") and directed by R.J. Cutler ("The September Issue"), I call foul. Here's a story that examines the difficult choices adulthood brings, then lets its protagonist off the hook. It's as emotionally manipulative as those who tell their lovers they'll kill themselves if they are left. Fans of the book (assuming the adaptation is faithful) are likely to feel differently, of course. There is the argument to be made that love is the choice we bring to our fates. But that argument can be countered by the fact that just about everything in Mia's life is perfect. Her parents are cool, pushing Mia to have fun, find herself. Dad Denny (Joshua Leonard, "Humpday") the former member of locally famous, recorded band Nasty Bruises, gave up his music to buy his classically talented daughter her own instrument. Denny and Kat apparently had little problem sliding from their punk pasts into a teaching career and part time job as a travel agent and although we're told times were tough, they've made the perfect nest in a charming home where they throw open houses for their Bohemian friends every Sunday. Younger brother Teddy (Jakob Davies) is an adorable tyke who's supportive of his sister. And then there's Adam, the older boy who could have been the Halls' son, coveted by women throughout the city yet available to be drawn to the shy cellist. Even the threat from his playful stage mate Liz (Ali Milner) is dismissed because she's gay. Mia also has a best friend, Kim (Liana Liberato, "Trust"), who'd do anything for her and a gruff old Grandpa (Stacy Keach, "Nebraska") who atones for his lack of enthusiasm for his son's music through Mia. And of course, Mia herself is not only outrageously talented, but gorgeous, with long glossy hair, smokily shadowed eyes and cotton candy lips (always slightly parted, sensual innocence). The film begins in the Halls sun dappled kitchen where everything looks shot through a heavily gauzed lens (cinematographer John de Borman's ("An Education," "Made in Dagenham") images here are so hazy, they look doubled). At school, demi-god Adam stops to watch Mia, lost in her own playing. He's smitten, she's flustered (but not enough to stop narrating the obvious - 'During the next couple of weeks, I noticed Adam hanging around when I was practicing'). Then the accident happens and as Mia runs about the scene, later hospital, barefoot, she remembers everything that led up to this point, as her body-in-a-coma is advised by Nurse Ramirez (Aisha Hinds, TV's 'Under the Dome') that she's in charge of her own fate. For their first date, Adam asks her if she'd like to go see a cello performance and everyone's thrilled. 'Why do I have this feeling you're about to mess up my life?' she asks afterwards, a pretty presumptuous statement for a shy girl to make. She's so awkward around his club scene, though, that her parents need to intercede, yet we only see Adam's crowd trying to be friendly. Mia finally breaks through on Halloween after raiding her mother's closet to dress as one of Kat's idols, Debbie Harry. The change in look and Adam's performance with Willamette Stone appear to set her free (he's costumed as Mia's idol, Beethoven), yet she still wavers, asking Adam which Mia he prefers. Chloë Grace Moretz is called upon to enact many scenes of overpowering grief, which she pulls off convincingly, but 'flashback Mia' isn't terribly different from her shy Carrie, a nice girl who doesn't feel like she fits in thrilling to attention from a high school hottie. Blackley plays the perfect boyfriend with a confident maturity and unawareness of his own effect. Adam's very different familial background plays nicely into the abandonment issues which cause romantic rift, another aspect of the character Blackley modulates truthfully. Enos and Leonard are fun (Leonard may have the film's funniest line when he demands Teddy play no Iggy Pop past 1978) as aging rebels, the type of parents most would love to have. "If I Stay" is a movie for teenaged girls and the target demographic will likely mop it up with Kleenex. But its central message about the choices we make for a fulfilling life cops out. Mia may be facing unimaginable loss, but she's also allowed to have her cake and eat it too. One almost wishes for a sequel - "If I Stay 2: The Inevitable Resentment."