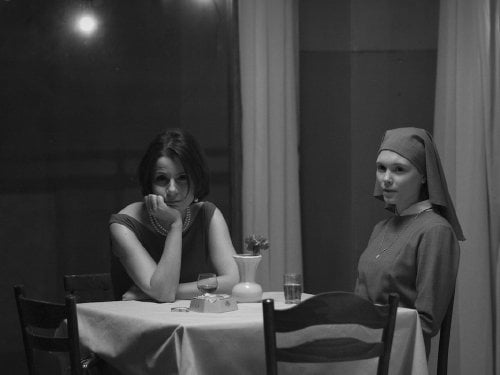 With her vows approaching, novice Anna (Agata Trzebuchowska) is advised by her Mother Superior (Halina Skoczynska) to meet with the aunt, Wanda (Agata Kulesza), who didn't want to take her when she was orphaned. Sheltered Anna travels to Lodz where she learns her world weary aunt is a judge and member of the Communist Party, but what she learns about her family is a shock, beginning with the fact that her name is actually "Ida."

Cowriter (with Rebecca Lenkiewicz)/director Pawel Pawlikowski's ("Last Resort," "My Summer of Love") first Polish film is a striking meditation on identity, history and the paths shaped for us by circumstance. Filmed in academic ratio in glorious black and white, Pawlikowski's two protagonists couldn't be more different, yet his orchestrated dance between the two results in one truly finding herself while the other faces inconceivable guilt and loss. The film opens with a stunning shot of Anna repainting a statue of Christ which looms over her in the frame (Pawlikowski and cinematographers Ryszard Lenczewski ("My Summer of Love") and Lukasz Zal will frequently dwarf the characters in its lower extremes). When she arrives outside Wanda's door, the older woman doesn't appear at all pleased to see her, but relents, pulling out a photo album to visualize Anna's history as Ida, the daughter of Jewish parents killed during the war. Wanda decides to take her niece back to the old family home in an endeavor to find out just what happened to them. The sexually active, chain-smoking, alcoholic aunt is already clearly troubled by her own post-WWII past, and as the two look for the man, Szymon (Jerzy Trela, "Three Colors: White"), who hid Ida's parents, it becomes clear that within their history there is more than the loss of Wanda's beloved sister (so like you, she tells her niece, the kind of woman who made a stained glass window for the barn to keep the cows happy). Ida disapproves of her aunt's hedonistic lifestyle on the road but becomes interested in Lis (Dawid Ogrodnik), a handsome young saxophone player they've picked up hitchhiking who will symbolize Ida's taste of an alternate life (when asked, she tells her aunt she never thinks about carnal love, and her aunt's rejoinder epitomizes their differences and similarities, maybe the entire film). Trzebuchowska, who spends most of the film's running time in a habit, gives a quiet but mesmerizing performance. She's the spiritual side to the film's blended personalities, Kulesza's dispirited sophistication a stark contrast. These two will haunt, just as the glorious black and white cinematography reminds us just how much more dreamlike movies used to be.