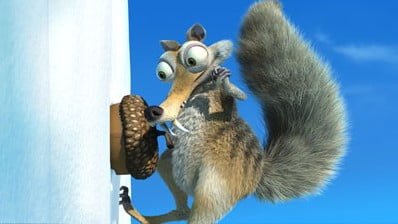 Manny the mammoth (voice of Ray Ramono), Diego the saber-toothed tiger (voice of Denis Leary) and Sid the sloth (John Leguizamo) have stayed together ever since they returned their tiny human ward to his family. The world is warming up again and all of the animals enjoy the change in climate. But, the warming trend is causing some very dangerous side effects as the melting ice will cause an ocean of water to come crashing down on the valley in “Ice Age: The Meltdown.”

I never really took to the first film in this franchise, “Ice Age,” although I appreciated its homage to John Ford’s “Three Godfathers.” But, it is a magnitude better than its sequel. Director Carlos Saldanha takes sole helming control (he co-directed the first film with Chris Wedge), with the first time feature script by John Vitti, and creates an animation that will appeal only to the kids. The loosely constructed story has the trio, and all of the other critters, heading to the end of the valley to climb aboard a “boat” to be saved from the coming peril. Manny, who believes that he is the only surviving mammoth on earth, is afraid that he is the end of the line for his species. This belief is reinforced by those around him, especially Sid, who are also convinced he is the last mammoth standing. Things change when they meet Ellie (voice of Queen Latifah), a lady wooly mammoth who happens to think she’s a possum. She carries the extra baggage of her two possum “brothers,” Crash (Seann William Scott) and Eddie (Josh Peck), and refuses to consider that she is different from them, much to Manny’s chagrin. This story of this little troupe’s trek to safety is interspersed with a series of little interludes involving the other creatures. There are a pair of prehistoric aquatic monsters that are freed from the ice by the warming trend. These mean guys stalk the stalwart party as they try to get to safety. Then, there is the tribe of miniature sloths that make Sid their king only to attempt to sacrifice him to save their clan. Of course, Scrat the squirrel is back with a vengeance as he pursues his ever-elusive acorn but with lots more screen time than in the first film. (Scrat’s string of amusing mishaps is actually the most entertaining part of “Ice Age: The Meltdown.”) The cartoon quality CGI keeps the artificial, fake fur aspects of “Ice Age” and there is little discernable technical advancement in the sequel. “Ice Age” The Meltdown” has the feel of a true sequel – the characters developed the first time around just do more of the same. One disappointing aspect of the follow-up is that Diego has lost his edge and has become little more than a big pussycat – though he does overcome his fear of water in a feat of bravery late in the story. None of the vocal performances stand out. Queen Latifah gives bland voice to Ellie and the original stars only repeat their roles without expansion. If you’re under the age of 10 you will likely enjoy “Ice Age: The Meltdown.” But, the tale is so slight it seems better suited for video rental anyway.