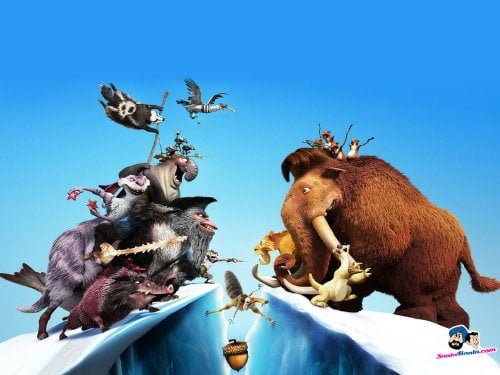 Manny (Ray Romano), Diego (Denis Leary) and Sid (John Leguzamo) are back again. When our favorite saber-toothed squirrel, Scrat, pursues his beloved acorn to the very center of the Earth and triggers the next great transformation of the planet, separating Manny from his family, in “Ice Age: Continental Drift.”

One question: who thought that having pirates in an “Ice Age” movie was a good idea? Isn’t it enough that the Earth is being ripped apart by the actions of an acorn-obsessed prehistoric squirrel and Manny and his family are, too? Apparently, screenwriters Michael Berg and Jason Fuchs do not think so and come up with a mish-mash of stories, adventures and intrigues that elicited exactly two smiles from me for its hour and a half runtime. One involved Wanda Sykes as Sid’s randy grandma doing hijinks and the other poor hapless Scrat. That is probably why the audience of mostly kids I saw this with was mostly quiet. The usual suspects from the previous “Ice Age” films are joined by a whole bunch of new characters, primary of which is Captain Gutt (Peter Dinklage), a seething simian with a god complex who sees it as his mission to keep Manny and his family, wife Ellie (Queen Latifa) and daughter Peaches (Keke Palmer) apart. Why? Who knows? Franchises can and do reach a saturation point and diminishing returns. A case in point is the last “Shrek” movie, number four. “Ice Age: Continental Drift” suffers much the same way. I came walking out of the theater scratching my head and asking myself: was that necessary? The answer is no. About eight hours after seeing “Ice Age I had the far greater pleasure of seeing a marvelous animation that is part of this year’s French Film Festival at the MFA, “The Painting.” I went from the ridiculous to the sublime. If we are lucky, “Continental Drift” harkens the end of the Ice Age.