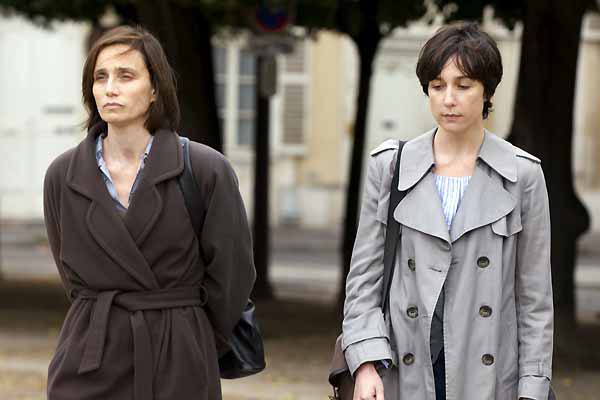 Léa (Elsa Zylberstein, "Jefferson in Paris," "The Stone Council") is a professor, married with two adopted Vietnamese girls who has an older sister, Juliette (Kristin Scott Thomas, "The English Patient," "The Other Boleyn Girl"), whom she hasn't seen in fifteen years. Juliette was in prison for a terrible crime and while Léa is hopeful of reengaging their relationship, her husband, Luc (Serge Hazanavicius), is not thrilled that his sister-in-law will be staying at their home. Juliette is awkward, hardened and withdrawn, accepted by some, shunned by others, but Léa persists in "I've Loved You So Long."

Writer/director Philippe Claudel is a Professor of Literature at the University of Lyon who also taught in a prison for eleven years. With his feature directorial debut he achieves a career capping performance from Kristin Scott Thomas with wonderful some from Zylberstein, but although he has written from a good psychological foundation of family and social dynamics, he stumbles with his climatic revelation, a contrived piece of writing that turns his already sympathetic heroine into a martyr. We first see Juliette sitting alone in the airport, smoking a cigarette both studiously and distractedly and it is a shock to see the usually glamorous Scott Thomas (who has lived in France for decades with her French husband, a doctor) looking so ashen and drawn. The reunion with her sister is strained - Léa was just a young teen when Juliette went into prison. Juliette wanders her sister's large, comfortable house like a ghost and is startled to find an old man in the study when she thought she was alone - he is Luc's Papy Paul (Jean-Claude Arnaud), a happy, twinkling senior struck mute by a stroke and his library becomes a quiet refuge, partners in absence. Claudel takes his time, slowly peeling away layers of Juliette's secret as others, including Léa - who will not ask direct questions of her sister despite Luc's prodding - would discover them. Juliette tells a friendly but nosy social worker that she has spoken of her crime to no one and is not about to begin with her, but begins a tentative friendship with Capitaine Fauré (Frédéric Pierrot, "They Came Back"), the lonely man she must check in with at the police station every other week. We learn just what her crime was when Juliette goes for a job interview and is asked point blank by a factory manager and it is shocking in her matter of fact answer. He promptly throws her out. Léa and Luc's 8-year-old, P'tit Lys (Lise Ségur), is curious about this aunt she never knew she had, but when she asks to read a poem to her, Juliette's response is almost violent. Later, the niece's continued interest brings them to a forgotten piano, where Juliette teaches her just like she once taught Léa (the film's title is a lyric in the lullaby they used to play). Léa remains optimistic and gradually tries to bring Juliette into her circle of friends and colleagues, and one in particular, Michel (Laurent Grévill, "Look at Me," "Actresses"), becomes quite captivated but knows enough to give her room. When a drunken party guest demands Juliette's secret and she answers honestly, all but he take it as a joke. Meanwhile Léa, caught between her guilt at having abandoned her sister for all those years (she was forbidden to contact her by their parents) and her husband, acts out at school, coming down on a student's thoughtful analysis of Dostoevsky's "Crime and Punishment." Eventually, Juliette's quiet relationship with P'tit Lys, who requests her aunt for her bedroom story, breaks down Luc's distrust and begins a healing process for his and Léa's marriage, surface happy up til now. Claudel features many themes throughout his script - imprisonment via Papy - the many ways we lose our families - Fauré, a man who has lost his family in a different way, represents Juliette's road not taken; her and Léa's mother (Claire Johnston, "8 ½ Women") is a victim of Alzheimer's - and rebirth - Juliette reenters the work force and forges her independence just as a close couple of Léa's friends have their first child. We can see Juliette's transition and Léa's clinging to the past through their costuming, Juliette first seen in serviceable skirts and shoes in drab colors which gradually give way to more feminine dress, Léa in neat but unsophisticated outfits. Kristin Scott Thomas mesmerizes us with her secret. The actress is always contemplating, locked into an almost unbearably palpable sadness. Even when we find out what she has done, we continue to wonder why. Scott Thomas has created a tragic figure who engages our utmost sympathy even as she erects walls, even with her well-meaning sister. Zylberstein also deserves credit, a cheery presence trying to work her way into the woman she once idolized's good graces. As she tries to explain her lack of contact, we can see her recognize the weakness of her own defense flickering across her face. Other supporting players all exemplify their roles in relation to Juliette. "I've Loved You So Long" is a terrifically engaging story of a woman's strength, grief and healing as well as an emotional mystery. That, in the end, the film doesn't live up to its star's performance is a disappointment, but the journey is well worth taking.