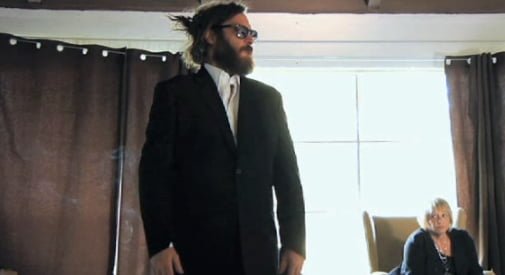 In the fall of 2008, Casey Affleck got his brother-in-law Joachin Phoenix involved in a celebrity studded play that was a charity event in recently deceased actor Paul Newman's honor. On the red carpet, Phoenix surprised everyone by suddenly announcing he was retiring from acting to launch a career in hip hop. Convinced that his persona as an 'intense' and 'complex' actor was obscuring the real him, Joachin agreed to let Affleck document him at this crossroads so he could reveal his true self in "I'm Still Here."

Here's a documentary where the filmmaker has incredible access but we must wonder - to what end? Since the project was announced, it has been cloaked in rumor of hoax or the documentation of some Andy Kaufman-like performance art, mainly because it was so difficult to believe Phoenix was serious. Affleck has denied this, but does he really think he has done his brother-in-law a service? The film doesn't play like a set up. It plays like a video diary of a childlike actor, buffered from the real world by assistants, managers and agents, who is deluded about his own abilities and who lashes out at the people he's hired when the world, particularly in the form of David Letterman, lashes out at him. It's a fascinating account of ego, celebrity, self destruction and, quite possibly, mental breakdown. And yet...why is Phoenix's dad credited as Jim Affleck? And is former Spacehog rhythm guitarist Antony Langdon really Joaquin's 'assistant?' Affleck begins with a little backgrounding. Home video from 1981 shows Joachin jumping over a waterfall in Panama as his dad applauds (water is a constant symbol throughout, a decision probably made when Edward James Olmos uses a water droplet analogy when giving Phoenix career advice). The Phoenix children sing, dance, and play in a live performance for television cameras like a granola version of the Jackson 5. Later, on the red carpet for his Oscar nominated performance as Johnny Cash in "Walk the Line," Joaquin claims he's never held a guitar when Affleck's just shown us evidence to the contrary. A hoodied Phoenix, his back to the camera, dances around like a fighter as he explains why he's doing this documentary. The guy who claims he's turning his back on acting because he hates it is nonetheless miffed when he learns Casey has the lead role in the play that will be his swan song. We follow the adventures of Phoenix as he travels from L.A. to NYC for a possible meeting with Sean 'Diddy' Combs. No meeting, but plenty of recreational drugs and hookers (Langdon has a penchant for full frontal nudity). Onward on the Diddy express to Miami, where Joaquin finally meets with Combs who demands to know who will finance this project. A performance is not well received and no one knows what to think when E.W. reports that the whole thing is a hoax being filmed by Affleck. Phoenix goes ballistic on 'Ant' (Langdon) as the leak, but Affleck merely inserts a still without really explaining just what really supposedly went down. When 'Ant' retaliates in the film's most notorious scene, again, Affleck's camera doesn't really show what we're told we are being shown. We also are left to wonder how he could shoot this without also being seen as betraying Phoenix. The film is frequently hilarious. Ben Stiller visits to offer Phoenix a role in "Greenberg" and finds his host barely comprehensible (as we often do). Later, he's one of the many who turn his colleague into 'a joke' by mimicking him on the Oscar telecast following that train wreck of a Letterman appearance. If this really is a mockumentary, Phoenix is doing some of the best acting of his career - he really comes across as stunned and devastated by where his own decisions have landed him. He cancels promotion for his 'last' film "Two Lovers" to record with Combs, but Combs looks perplexed when he hears what Joaquin has recorded (it's awful, as can be seen on youtube). Phoenix appears thunderstruck, on the verge of tears. He arrives at the "Two Lovers" premiere in a new suit covering his newly appropriated unmade bed look and has a panic attack trying to exit the theater. In the end, Affleck's camera follows Phoenix as he walks down a river in Panama, sinking ever lower into the water, evoking John the Baptist. Can his career be reborn? It's tough to say whether the actor is brave and insightful or just plain crazy.

In 2008, twice Academy Award nominated actor, Joachim Phoenix, announced without fanfare, that he is quitting acting for good to become a hip-hop artist. The news shook up Hollywood and all manner of rumor and innuendo flooded all levels of media and filmmaker Casey Affleck set up his cameras to follow Phoenix as he changes careers and his life in “I’m Still Here.” There is much buzz that “I’m Still Here” is not a documentary about the fall and maybe rise of a star but an elaborate hoax perpetrated on the unknowing public by Phoenix, Affleck and friends. Fresh from seeing the film, I have to say that I am not sure which is the reality. Joachim Phoenix comes across as a self-deluded god figure that, when things go right, takes the credit, and when they go wrong, places the blame on anyone of the hangers-on surrounding him. It is the portrait of a troubled man who thinks he knows what he wants but is really in meltdown. Or, is “I’m Still Here” nothing more than a prank by Joachim and his brother-in-law Casey to capitalize on the celebrity of Phoenix to fool the media into believing that it is all real? There are a number of inconsistencies in the film, like the camera showing up at the most unlikely places and times to capture the “raw” Phoenix as he rants and raves at his underlings. These lackeys accept, month after month after year, the abuse rained down upon them by the increasingly crazed Joachim. If I were in their position, I would have quit way back in the beginning, probably after punching my boss out. But, Affleck and company try to make you believe that people can have such a low level of self esteem to put up with constant verbal abuse and physical threats. Whichever “I’m Still Here” happens to be, it is an interesting story of a man at life’s crossroads - or maybe not. I do not want to know whether this is frightening fact or elaborate fiction. I like the idea that the film keeps me guessing which one it is. Or, maybe it is both?