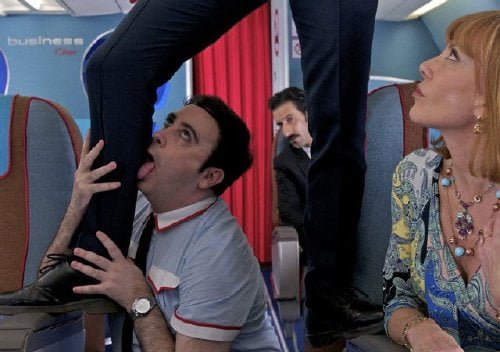 Peninsula Airlines Flight 2549 is heading to Mexico City following its take off from Spain. In cattle class, the attendants make their life for the next long hours easier by drugging the entire cabin. Business class, though, is a different story as the attendants here intend to, with their pampered customers, party hardy in “I’m So Excited.”

Thankfully the cabin crew in the back of the plane have drugged their passengers and themselves to avoid Economy Class Syndrome, so when the pilots and crew of business class find out that Peninsula Flight 2549 has a problem with its landing gear, they and their passengers get their minds of impending disaster with sex, cocktails, drugs and a spirited performance of "I'm So Excited!" Spanish writer/director Pedro Almodóvar ("Women on the Verge of a Nervous Breakdown") is as distinctive a filmmaker there is. Whether dealing in comedy or drama, his typically female-centric narratives arrive with colorful, visual flair. The idea of Almodóvar going for a sheer camp exercise certainly sounds delightful, but except for a few set pieces, this movie feels like a slap dash sex farce made on the cheap. I personally didn't care for the director's last effort, "The Skin I Live In," but at least it engendered a reaction. A preamble features baggage transporter León (Antonio Banderas, "The Skin I Live In") learning his coworker/lover Jessica (Penélope Cruz, "Broken Embraces") is pregnant, their drama taking the attention away from an injured colleague. I believe this is supposed to explain the 'human error' responsible for the plane's mechanical malfunction, but it's not very clear. On board, Chief Steward Joserra (Javier Cámara, "Talk to Her") is already imbibing and trading quips with married pilot Álex Acero (Antonio de la Torre, "The Last Circus") and copilot Benito Morón (Hugo Silva) about the status of their sexuality when the cockpit is stormed by Bruna (Lola Dueñas, "The Women on the 6th Floor"), a woman claiming to be a psychic who says she senses a 'big happening' during their flight. As the three airline employees already know about their landing gear, they begin to question her, but she seems optimistic, hoping this means she will lose her virginity. Known for his inability to keep a secret, Joserra blabs to his stewards Ulloa (Raúl Arévalo, "Even the Rain") and Fajas (Carlos Areces, "The Last Circus"), who keeps a folding altar for his prayers. Business class passengers cotton on and so we meet diva Norma Boss (Cecilia Roth, "All About My Mother") and her handsome seatmate Infante (José María Yazpik, "Beverly Hills Chihuahua"), hungover bridegroom (Miguel Ángel Silvestre) and his passed out wife (Laya Martí) and financier Sr. Más (José Luis Torrijo, "Pan's Labyrinth"). The last passenger, actor Ricardo Galán (Guillermo Toledo, "El Crimen Perfecto"), asks to use the airline phone, which works but which is transmitting conversations over the plane's loudspeaker. And here's where Almodóvar really goes off the rails, seguing to the recipient of Ricardo's phone call, his suicidal girlfriend Alba (Paz Vega, "Spanglish"), whom he's trying to dump. When she drops her cell from the bridge she was about to jump off of, it lands in the bicycle basket of Ruth (Blanca Suárez, "The Skin I Live In"), a past love of Ricardo's. We're off the plane for enough time for the action to grind to a halt with little to no later payoff. The three gay stewards mix 'Valencia cocktail,' spiking it with mescaline and all hell breaks out in business class. Bruna finds the sexy, sleeping young man she spied in economy and has her way with him, Norma and Infante go at it and the bridegroom takes advantage of his unconscious bride. It's all barely amusing. The plump, eye-linered, hair-lacquered Areces is the film's campiest element, matched by Roth's imperious, Pucci-clad dominatrix, but no one else really stands out (Cámara and Arévalo are terrific in their musical number with Areces). Outside of the sexual orientation of the crew, little of the personal drama matters. Guardian newspapers headlines blare with a bank crisis scandal that peters out. Secret agendas become known, new relationships form, but by the time the plane lands in a puddle of soap suds, the film's already becoming a distant memory. The film's R-rated content deems it unacceptable airline fare, which might possibly have explained an ironic joke on Almodóvar's part.

Pedro Almodovar has always been the kind of filmmaker who marched to his own tune. Some of his works have been terrific, like “Women on the Verge of a Nervous Breakdown” and “Tie Me Up, Tie Me Down.” Others, like “The Skin I Live In,” verged on the reprehensible. “I’m So Excited” falls somewhere in the middle of the pack. It is light in tone and mood – the film begins with the disclaimer that this is a work of fiction with no bearing on reality – so when the booze, drugs and sex spontaneously explode in the front cabin, we can relax. It is a work of fiction, after all. I have read reviews on “I’m So Excited” and some praise it as a near masterpiece. Others call it a near disaster. What it is, though, is an indulgence by Almodovar and his team of regular players from his past films and an excuse to play. The story, by the director, is a scattershot affair that has the partial party plane (the cockpit crew partakes in the partying) also facing the potential catastrophe of a damaged landing gear that forces the flight to circle and wait over the Seville Airport. This danger, though, only fuels the party mode and all the revelers throw caution to the wind. If Almodovar had kept the action on board flight 2549, he would have had a mildly funny drawing room comedy as people pop in and out of the cockpit and business class, mostly to drink one of the concoctions that head attendant Jossero (Javier Camara) and his assistants put together. But, he adds a series of vignettes focused on a broken airphone and calls to friends, family and lovers that take you from the campy, sexy and boozy goings on aboard flight 2549. The humor is more of the chuckle variety but the film has a campy feel that will appeal to some Almodovar fans, but not all.