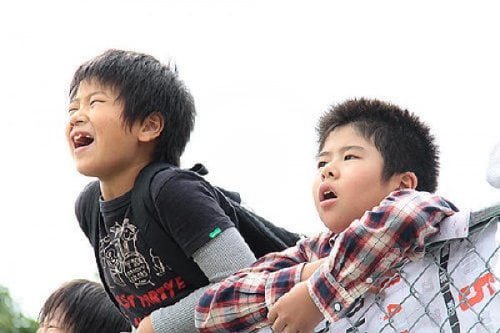 12-year old Koichi (Koki Maeda) lives with his mother and grandparents in Kagoshima on the south end of Kyushu, Japan. His younger brother Ryu (Onshiro Maeda) lives with their dad in Fukuoka on the northern end of the island. The boys have been apart for six months and, more and more, they want to be together again as a family. The construction of a bullet train linking the two cities, according to Koichi, will have magical properties when the trains from each town pass each other for the first time in “I Wish.”

In Kagoshima, 12 year-old Koichi (Koki Maeda) cleans volcanic ash from his room. He calls his younger brother Ryunosuke (Ohshirô Maeda) from school and finds out he's having fun with friends. Koichi, who is living with his mother Nozomi (Nene Ohtsuka) and her parents while Ryunosuke is back home in Fukuoka with dad Kenji (Jô Odagiri, "Bright Future," "Air Doll"), is miffed. When he hears that if one witnesses two high speed bullet trains passing each other whatever one asks for will be granted, he sets a plan in motion to reunite his parents in "I Wish." Writer/director Hirokazu Koreeda ("Nobody Knows," "Still Walking") once again looks at family life in modern day Japan, and while not everything is necessarily happily ever after, "I Wish" is like the bright flip side to his tragic "Nobody Knows." Koreeda steers clear of death, which has haunted many of his films, but despite the delightful adventures of children - and a grandfather - taken here, he offers a glimpse of not-so-perfect Japanese life where a young couple has separated because of the wife's dissatisfaction with her husband's sense of responsibility. Koreeda's like a modern Ozu, documenting the trickle down effect of global economic changes on once strongly held traditions of Japanese family life. The metaphorical volcano which looms over Kagoshima becomes Koichi's weapon - he will wish that it blows, forcing a return to Fukuoka, even though his friends point out that they could end up as collateral damage. Koichi and his pals wonder why they must climb a hill to get to school and when Nozomi notes in irritation that her younger son is just like his father, it adds to Koichi's belief that he's gotten the raw deal. Dad is a rock musician with an untethered life and Ryunosuke has freedoms Koichi does not. He doesn't have to climb a hill to school, either. So, Koichi gathers a few friends to raise money to travel to the spot where they can watch the trains pass, beginning with sweeping underneath vending machines. Meanwhile, his grandfather, Shukichi (sao Hashizume) relives his youth with his retired friends and nostalgia for a childhood sweet cake called karukan sets them on a parallel path wishing for change. It's not only the men who are dreamers, exasperating their wives, though, as seen in Megumi (Kyara Uchida, an Asian version of 'Wonder Years'' Winnie), who envies the celebrity of a classmate and aspires to her own television career. She's the daughter of Kagoshima's barkeep and single mom Kyoko (Yui Natsukawa, "Still Walking"), who returned to Kagoshima after dashed city dreams, a fate which looms for Nozomi as well. Koichi's grandmother Hideko (Kirin Kiki) keeps an amusing perspective on everything. The kids do make there way to watch the trains cross, Ryunosuke reuniting with his brother, but surprises are in store for everyone. Koreeda, who has given us family flashbacks from Koichi's point of view throughout, changes everything with an alternate look through Ryunosuke's eyes. Koreeda has used Western music before and he does so here again, referencing Kenji's world while reinforcing themes of Japan's changing landscape.

Writer-director Hirokazu Koreeda had proved himself effective working with child non-actors with “Nobody Knows (2004)” about a 12-year old boy who has to take care of his younger siblings after being abandoned by their mother. It is a grim survival tale of a boy forced to become a man far before he should have to. With “I Wish,” the filmmaker takes a lighter, more whimsical look at kids growing up in modern Japan but also deals with real life issues like divorce and the resultant separation of siblings. Here, though, the mood is anything but grim as the two boys plot to get their little family together, even if it takes magic to do it. “I Wish” centers on Koichi, Ryu and their band of loyal friends (who have their own wishes to make) as they join forces and resources to reunite the boys’ mom and dad. If both brothers make the same wish at the same time when the new bullet trains first pass each other, according to urban legend, the wish will be granted. There are a bevy of veteran actors on board in small roles that help flesh out the adventure as the adults help the tiny troupe. One elderly couple even takes them in and feeds them before the kids continue their trek to witness the first passing of the trains. All of the kids in “I Wish” come across as real and believable, a tribute to Koreeda’s directing skills working with children. The film also gives us a slice of Japanese life through the eyes of kids. I never had a sense of danger for them as they go off on their adventure without adult supervision. The adults they meet along their journey all seem to have the well-being of the children in mind. So, without invented menace, Koreeda allows his story to unfold and we get to know the boys and their friends and, guess what, they are just a bunch of regular kids doing what kids do – and, not a single video game is to be seen. This charming, whimsical pre-coming-of-age slice-of-life film is for kids but, unfortunately, none are bound to see it here in the US. Fortunately, for me, I did.