I Want Someone to Eat Cheese With 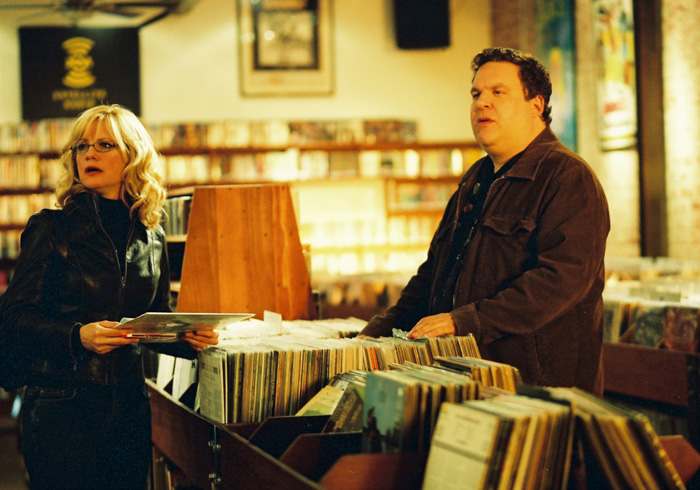 James Aaron (writer/director Jeff Garlin, HBO's "Curb Your Enthusiasm") is an overweight Second City actor who lives with his mom (Mina Kolb, "A Mighty Wind") and yearns for a girlfriend. He keeps losing his battles of the bulge, but when he wanders into an ice cream shop and meets Beth (Sarah Silverman, "Sarah Silverman: Jesus Is Magic," "School for Scoundrels"), things could be looking up and he is encouraged when she tells him 'I Want Someone to Eat Cheese With."

This delightful small unshowy film and overt homage to "Marty" marks a promising debut by Garlin, whose easy charm and way with naturally loopy dialogue makes this lonely guy's plight something to invest in. It's like 1991's "Only the Lonely," another Chicago set film where a heavy guy lives with mom and looks for love, done indie style. Garlin's simple direction allows his characters and dialogue to come to the fore. He wanders the city with buddy Luca (David Pasquesi, "Return to Me"), commenting on women ('There is nothing hotter than an angry French woman.') while looking for eateries. His middling career finds him taking lousy jobs such as the set up guy for Smear Job (directed by real life director Paul Mazursky), a mean spirited Punk'd played on strangers. Meanwhile, he keeps striking out getting an audition for a remake of his favorite film "Marty," a role he believes is tailor made for him. Garlin attends Overeaters Anonymous meetings, but every night goes to a local convenience store to stock up (owner Dick (Dan Castellaneta, "The Pursuit of Happyness," voice of Homer Simpson) tries to dissuade him), then sits on the hood of his car eating in the moonlight. It's after one such meeting that he enters that fateful ice cream parlor whose spirited counter girl asks if he's 'ever given a girl a Hoagie Shack.' Encouraged by the sexual innuendo, James asks Beth out and receives more come in when he suggests role playing in the aisles of Dick's store. He does less well impressing Stella Lewis (Bonnie Hunt, "Return to Me," "Cheaper by the Dozen"), his friend's daughter Penelope's (Elle Fanning, "Babel") teacher, when he stands in for career day and makes his own sexual confession to a room full of 8 year olds. And yet, what a coincidence when he later bumps into her in a used record shop as they both search out a Ben Webster LP. Garlin's collected a who's who of "Enthusiasm" alumni for his large cast and all the actors get their little moments painting the fabric of James's life. Joey Slotnick ("Idle Hands," "Hollow Man") playing a hot dog 'Pirate,' Amy Sedaris ("Strangers With Candy") and Richard Kind (TV's "Spin City") all show up for one scene and we eventually learn that teen idol Aaron Carter and sexpot Gina Gershon ("Prey for Rock & Roll") have been cast as Marty and his mother ('he was pretty good,' James observes after seeing the insanely cast film). It's the leads, though, who really put the film over from Garlin's unassuming everyman to Hunt's always benign and welcome presence. Mina Kolb ("A Mighty Wind") is a hoot as James's even more hefty mom who is not anywhere near as reliant on him as he thinks. Silverman just repeats her usual kooky, sexually obsessed persona, but gives her role what it's looking for. Given his simple setups, Garlin achieves a few nice visual moments, from the repeated moonlight munch outs to his audition room wait sitting under a faux movie poster for "Heartfelt Sap." Best of all, Garlin doesn't fall into a cliched happy ending trap, instead ending on a note of hopeful promise. "I Want Someone to Eat Cheese With" is a lovely little film.