I Trapped the Devil 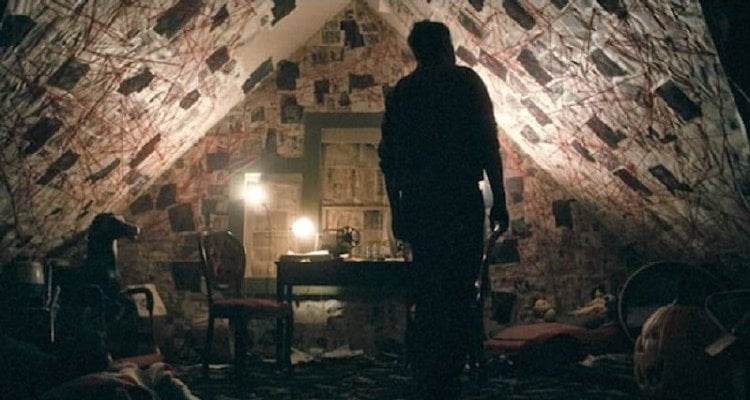 Matt (AJ Bowen) and his wife Karen (Susan Burke) arrive unexpectedly to visit Matt’s brother Steve (Scott Poythress) at Christmastime. After forcing his way into the large Victorian home, Matt is greeted by the brother he hasn’t seen in two years holding a butcher knife. Steve tells him he cannot stay there and asks him to leave. There is clearly a family history here, possibly mental problems on Steve’s part, but neither Matt nor Karen is quite ready when Steve shows them something, a man he’s locked in his basement, in “I Trapped the Devil.”

First time feature writer/director/editor Josh Lobo has clearly seen episode 41 of ‘The Twilight Zone,’ ‘The Howling Man,’ about a man seeking shelter in a monastery whose abbot warns him away from a locked room. He’s put a conspiracy theory spin on it, the type usually employed in serial killer films involving hundreds of news clippings pinned on walls connected by pegged red string. In truth, though, he’s taken a half hour Serling classic and stretched it out to feature length. Even the character depth which could have added flavor is punted, hinted at family history never articulated. Using the clichéd device of opening with the film’s ending, we see two policemen (Rowan Russell and John Marrott) force their way into a home lit only by Christmas lights. Just as one comes upon something, we flash back to Matt and Karen pulling into the same home’s drive. After not being welcomed, Karen pipes up that they are there at her urging. Matt notifies Steve that they are not leaving. There is a cathode ray tube TV sitting on plastic milk crates which bursts into snowy life, a figure emerging from the static. The phone rings insistently. Steve sleeps with an old stuffed rabbit like "Psycho's" Norman Bates. Down in the red-lit basement, a wooden door is blocked by a cross of wood and three locks. A wavering voice (‘This Is Us’s’ Chris Sullivan) asks if anyone is there, says he needs help and wants to see his family. Lobo spends a lot of time observing these three characters while little actually happens. Karen snoops around upstairs and finds a loaded revolver. Steve takes Matt into his investigation room full of newspaper stories about missing children and satanic drawings, sharing his theory. One of the couple seem to believe Steve while the other does not, but even this development fails to build tension. Oddly, Lobo tips his hand well before his climax. Only those unfamiliar with The Twilight Zone will find anything intriguing here. The production is minimal, dimly lit, Ben Lovett’s aggressive score doing much of the heavy lifting. “I Trapped the Devil” is a step above much of the flotsam and jetsam of the horror genre, but it is a disappointment from the IFC Midnight label. Grade: