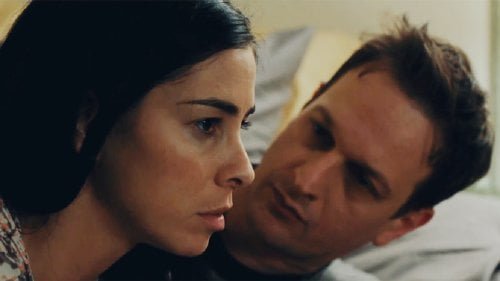 Just what is this movie attempting to say other than miring its audience in Downerville? Adapted by the novel's author Amy Koppelman and Paige Dylan ("Grace of My Heart"), about the only takeaway from "I Smile Back" is that depression is hereditary and depressive parents are likely to pass along their misery from generation to generation. Sarah Silverman delivers the type of performance typically labeled as 'brave' because her character debases herself. She's fine in the role, but it's not revelatory nor anything that raises the film above a slog. Director Paige Dylan ("Grace of My Heart") exhibits a deft hand for impressionistic montages that convey state of mind, opening his film with one of these mini-character studies, but he hasn't given his film a compelling narrative. 'Wake up, beautiful' are the repeated words Laney's presumably supportive husband greets her with each morning, before his wife gets up for the ritualistic assembly of school lunches that indicate all she can muster as a school parent. Laney fails to heed school memorandums and rules, barely managing to drop off Eli (Skylar Gaertner) and Janey (Shayne Coleman) before spending the afternoon snorting coke and having sex with the husband of the Brooks's best friends (Thomas Sadoski, HBO's 'The Newsroom'). When she lets her guard down, Laney is the picture of suppressed rage and when she goes on a massive bender one night, one which leads her to call for Bruce's help, he gets her into rehab. There we learn she was abandoned by her father as a little girl. When Bruce visits, he doesn't want to address any truths - his support is of the surface variety. There's concern for Eli, who Laney sees is exhibiting recognizable behavioral signs, and an ill fated trip with Bruce to an insurance convention in upstate New York where dear old dad (Chris Sarandon, "The Princess Bride") lives. Debauched, destructive habits return. Is that all there is? Yes, other than some inexplicable jabber about drying one's genitalia to avoid a rash and Bruce's self-help book which he calls a 'Bible for the living,' subjects with no payoff or deeper meaning. "I Smile Back" is a competently made film with a few good moments but it offers no real insights, no real drama and no real conclusions. Grade: