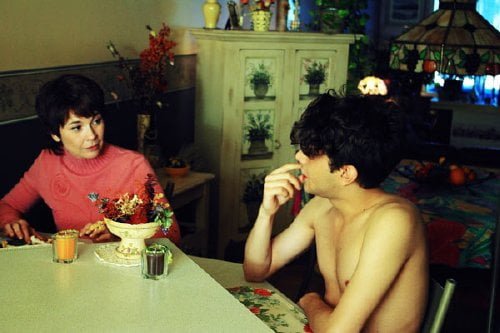 Teenaged Hubert Minel (Xavier Dolan, "Martyrs") lives in the city with his mother, Chantale (Anne Dorval), whose very existence seems to annoy him. Hubert is constantly acting out and screaming imagined embarrassments and injustices at the top of his lungs, so mom decides a time out at boarding school is in order. But even away, Hubert acts out, turning in an assignment titled "I Killed My Mother."

Canada's submission for the Foreign Language film Oscar is the sensational filmmaking debut of twenty year-old writer/director/star Xavier Dolan. The artist exhibits not only technical competence and a strong artistic signature, but the maturity to recognize the underlying causes of teenage arrogance. Despite her calm unsmothering love, Chantale is constantly battered by her son's words. If she temporarily forgets a tiny detail, she has Alzheimer's, if a crumb should elude her mouth, she eats like a pig. When Chantale calls in her ex-husband for reinforcement, their son's accusations just become louder. When he is sent away, he rails against his banishment. Hubert, though, for all the vitriol he spews at his mother, has stable relationships outside of his home with Antonin (François Arnaud), his best friend and (unbeknownst to mom) lover, and Julie, the young teacher (Suzanne Clément, "It's Not Me, I Swear!") who's taken an interest in him. When he goes to boarding school, he is befriended by Éric (Niels Schneider) and has a brief affair. Like his creator, Hubert is an artist who frequently videotapes himself and we are made privy to these close-up, black and white confessionals, mostly about his love/hate for mom. Gradually, Hubert's confused teenage angst comes into focus. A final (ally!) rejection by mom on the eve of the beginning his second year at boarding school results in an Oedipal nightmare which foreshadows the film's conclusion, a beautiful realization of the pit of Hubert's primal scream not unlike Max's in "Where the Wild Things Are." "I Killed my Mother" is a film that would be praised coming from an experienced director twice the age of the supremely confident Dolan. In addition to his video diary, he often uses static camera to with action choreographed coming into and out of the frame, like Ming-liang Tsai, but in Dolan's hands the device is used to propel us forward. At other times, slo-motion achieves a different emotional tone, such as the kiss at a disco with Antonin. As if Dolan isn't already assured mixing these styles with simple cutting back and forth between characters, he introduces actual speed as a device, returning home from that trippy dance floor to unleash a torrent of loving words to his mom (which he takes back the next morning). The film is also beautifully scored by Nicholas Savard-L'Herbier with music that always sounds like it's about to break into a chorus of "Mad World" without ever doing so. Dolan, who looks like one of the Thompson Twins with his parted sweep of curly locks, is terrific and he's matched by Dorval, whose calm is the opposite of her son's until her maternal skills are called into question by an outsider. Their relationship should go down as one of the most heartfelt and complex mother/son pairings in film.