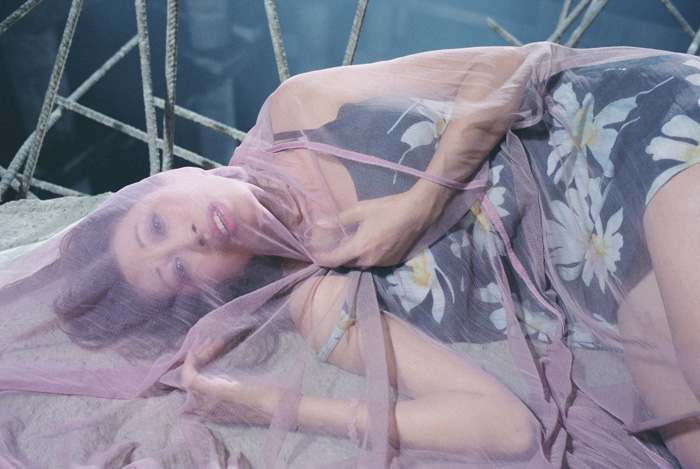 In Kuala Lumpur, a homeless man (Lee Kang-Sheng, "What Time Is It There?") beaten and robbed is taken to the makeshift home of Indian migrant laborer Rawang (Norman Atun), carried on the musty old mattress he and his friends have just found on the streets. Meanwhile, a coffee shop owner (Pearlly Chua) cares for her paralyzed son (also Lee Kang-Sheng) while both she and her waitress Chyi (Chen Shiang-Chyi, "What Time Is It There?") and possibly Rawang himself all look to the recovering victim thinking "I Don't Want to Sleep Alone."

Writer/director Ming-liang Tsai ("What Time Is it There?," "Goodbye Dragon Inn") has returned to the country of his birth for the first time to make a film, but carries forward themes that have characterized previous works. Boston's late August 90+ degree temperatures were the perfect accompaniment to this sultry, melancholy gaze on a disparate group of five people largely abandoned by society trying to find comfort with another person in a post-9/11 world. Kuala Lumpur is introduced via its street cooks, vendors and hustlers, one of whom has the mute Hsiao Kang beaten when he does not pay for the 'numbers' which will win him money. Hsiao Kang is found on the street by a group of out-of-work Indian migrant laborers and the good-hearted Rawang insists they take the man home. There he feeds, baths and cares for the man in silent scenes that need no words (Ming-liang's film is largely silent after its opening shots). A sexual longing is hinted at, but not overtly stated. Paralleling Rawang's efforts is a woman who cares for her disabled son, fed through a feeding tube, bathed, massaged with care. They are watched from above by Chyi, who works for the woman in a coffee shop and who is trying to connect with Kang (played by the same actor). In one of the film's few other talking scenes, we learn that the coffee-shop Lady Boss’s second son (Samantha Toh Su-Yee) is coldly trying to sell their home and business out from under them. Into this bleak world comes a sickly haze (PSI index 650+ we hear on the radio), from which everyone must mask themselves (with everything from scarves to instant noodle bowls) even as they are trying to form intimacies. "I Don't Want to Sleep Alone" has another character in the abandoned construction site the director found as his set ('All we did is light it'). He shoots a number of silent reflections in its water-filled central amphitheater - a laborer eating lunch, Kang fishing. Using his trademark static camera shots, Ming-liang breaks up the space, and subsequently his action, with the interior architecture of his building. He also injects gentle waves of humor into his story - a radio program describing the five signs pointing towards replacing your mattress after Rawang's dragged his found one home, a group of Indian migrants on a sidewalk engrossed in a Bollywood musical playing in a shop window. If it is sometimes confusing sifting through the characters drifting through the Malaysian nights, "I Don't Want to Sleep Alone" is nonetheless successful in creating a mood that lingers. It is undeniably the work of an auteur.