I don't feel at home in this world anymore. 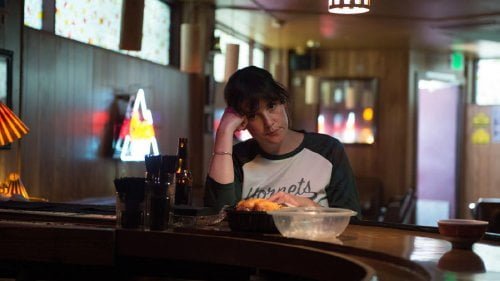 Ruth (Melanie Lynskey) is in a general funk over her job as a nurse's assistant and life in general, but when she comes home and discovers she's been robbed, it gets her juices flowing. Still, she's at a loss as to what to do until she runs into her oddball neighbor Tony (Elijah Wood), a martial-arts enthusiast outraged by her plight. The two join forces to track down the thieves, but get more than they bargained for in "I don't feel at home in this world anymore."

The 2017 Sundance Grand Jury winner and directorial debut of Macon Blair (writer/actor "Blue Ruin," "Green Room") strives to be a quirky comedy thriller but only achieves pointless nihilism. Blair caps things off with an unearned bait and switch intended to deliver life lessons, but it's a case of too little, too late. After a nasty old woman dies on her watch, a bar patron (Blair) ruins the ending of her novel and dog poop is yet again left in her yard, Ruth enters her home to find her grandmother's silver and her laptop missing. (When she hears a noise, she gets a butcher knife and proceeds to check it out, illogical in the extreme from what we've seen from Ruth so far.) Det. William Bendix (Gary Anthony Williams, "The Internship") seems to pin the blame on Ruth, who cannot remember is she locked her back screen door that day. So Ruth takes matters into her own hands. She finds a footprint by her fence and makes a plaster of Paris cast. She polls her neighbors, inadvertently running into Tony whom she'd accosted earlier over his dog, Kevin. She's afraid to take him up on his offer of help, but when she tracks her laptop to a nearby address on her phone and the cops tell her they cannot respond without a search warrant, it's Tony Ruth calls. Their confrontation with these home owners is one of the few amusing sequences in this comedy, the 'thieves' overwhelmed by Tony's nunchucks and throwing stars. Ruth gets her laptop back, but she's still on the trail, it having been purchased at River Sills Consignment where she hopes to find grandma's silver. While Tony distracts Killer Sills (Myron Natwick), Ruth attempts to reclaim her goods, but the duo cross paths with Marshall (David Yow, "Southbound"), Dez (Jane Levy, "Don't Breathe") and Christian (Devon Graye, Showtime's 'Dexter'), Ruth recognizing the distinctive tread wrapped with duct tape on the latter's sneaker. There is nothing funny that follows in the all out mayhem that occurs when our intrepid protagonists trace the robbers' van to the affluent home of Chris Rumack (Robert Longstreet, "Take Shelter"), Christian's father with the exception of the film's most notable asset, Christine Woods, in a breakout role. She plays Meredith, Christian's stepmother and Rumak's trophy wife, and she's a hoot as the woman who greets the two 'cops' at her door. But in general, the actors cannot be faulted here, Lynskey and Woods embodying the characters Blair created to a tee, Lynskey disgruntled and dogged, the rat-tailed Woods balancing his warrior righteousness with a moral compass. The film also stars a natural Lee Eddy as Ruth's friend? sister? Angie, Matt Orduna as Angie's husband Dan and Michelle Moreno as their young daughter Jana. Blair's film offers us a character who believes everything and everyone is rotten only to find a friend during her personal war on injustice. But the film that begins with gentle comedy before turning into an all out bloodbath offers no catharsis, its heroine escalating her assault beyond all reason, losing our sympathy in the process. Grade: