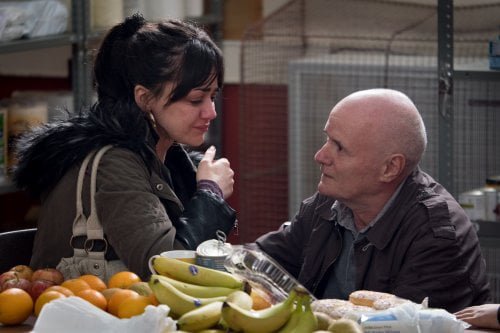 Daniel (Dave Johns) has worked hard his entire life as a carpenter until a heart attack took him out of the work force. Now, with no income, he must navigate the complicated and confusing British labor benefits system that recognizes him only as a number, not a human being, in “I, Daniel Blake.

After suffering a heart attack, construction carpenter Dan (Dave Johns) is advised not to return to work, but faces one frustration after another with Britain's bureaucratic welfare system, whose health assessment disagrees with his doctors. Witnessing a young single mother's callous treatment, Dan comes to her defense, befriending and helping Katie (Hayley Squires) and her two young children. Human kindness still exists, but the state proves a crushing obstacle in "I, Daniel Blake." Working with his long time screenwriter Paul Laverty, director Ken Loach ("The Wind That Shakes the Barley") finds grace in poverty in his powerful 2016 Palme d’Or winner. A champion of the underdog, Loach has found his surrogate in Dave Johns, whose righteous anger lives unopposed with his generosity of spirit and dignity. The film is a call to look beyond welfare funding to the actual people whose lives depend on it. We meet Daniel Blake in his small flat on hold on the telephone. After a 1 hour 48 minute wait, he's forced through a scripted health assessment and told he should have received a letter which he hasn't. When he asks for alternative methods to going on line, he's told there's a number he can call, it's posted online. Those seeking help are fed into a system which attempts to foil them at every turn, never more in evidence than when Employment and Support Allowance employee Ann (Kate Rutter, "The Full Monty") tries to guide him through an online form only to be reprimanded. This is the maze Dan and Katie find themselves in, Katie having been forced out of London to a flat in Newcastle where she has no friends or family. Dan walks Katie, Daisy (Briana Shann) and Dylan (Dylan McKiernan) to their new home, noting its disrepair and lack of warmth. He fixes the cistern and makes a flower pot heater. After he's gone, Katie finds a 20 BP note. As Katie tries to find work cleaning, Dan watches her kids, delighting in their company, making Daisy a carved mobile. Katie insists on making dinner, claiming she's not hungry, but when Dan accompanies the family to the Food Bank, Katie almost collapses after wolfing food directly from a can. But Dan can only help so much and after Katie's caught shoplifting, she grabs the suspect lifeline offered by the store's creepy security guard. Dan, having to prove he's looking for work he cannot do, finally snaps, spray painting the side of the Welfare Office building in protest as a cheering crowd rallies around (the film's title derives from this manifesto). Loach deftly balances Dan and Katie's relationship with the indignities each faces, Katie's only recourse prostitution, Dan's homelessness. Loach cannily demonstrates how poverty breeds crime, Dan's affable neighbor China (Kema Sikazwe) getting by dealing in counterfeit sneakers (Loach goes easy on the lad, who believes his Chinese contact is selling him the real deal under the table, education another casualty of poverty). While many in an overburdened system have no empathy, some, like Ann and the Food Bank volunteers, do. Johns, a standup comedian, epitomizes love's strength while being nobody's fool (his memories of his beloved late wife indicate hardship). Squires is an incredible find, an exhausted yet persevering woman deserving of everything Dan offers. Her Food Bank breakdown is astonishing. But be warned, "I, Daniel Blake" goes to bleak places in proving Loach's point. It's a shattering, eye-opening film. Grade:

The number one reason to see “I, Daniel Blake” is the deeply moving and fully nuanced performance by Dave Johns. This is the standup comedian’s first film role and he is outstanding. I empathize with the man deals with aging, health problems and bureaucracy that seems to be there to hinder, rather than help, the citizenry in getting their much-needed benefits. Daniel’s plight is one side of the social coin that pits a man against a monolith of red tape designed to hold off paying benefits until every ‘I” is dotted and every “t” crossed in the voluminous paperwork required. The other side of the coin is Katie (Hayley Squires) and her two kids. The single mom is new to the city and, after getting lost on her way to an important benefits hearing, is told that she cannot be helped – she was late and that is against the rules. Daniel is frustrated by the heartless system but he does his best (it never seems good enough) to follow the rules. He, like many of his age and social status, is internet illiterate and, when he talks to an actual bureaucrat on the phone or in-person, he is told he can find anything on the red-tape-laden web site. This governmental Catch-22, he believes, is there to force people off the rolls, not to tend to the citizens’ needs. It is the plight of Katie and her kids, Daisy (Briana Shann) and Dylan (Dylan McKiernan), which proves too much for Daniel to bear. He tries to stick up for her at the benefits office, only to be thrown out. He soon adopts the family as his responsibility, helping Katie by repairing things in her apartment, minding the kids and giving her money to pay the bills, though he can ill afford to do so. Director Ken Loach, with the screenplay by Paul Laverty, creates a socially relevant and poignant character study about the losing battle of an average guy against a system that sure does seem to not care. Daniel does not realize it but he, in the end, becomes a true folk hero in a great performance by Dave Johns.