I Carry You with Me 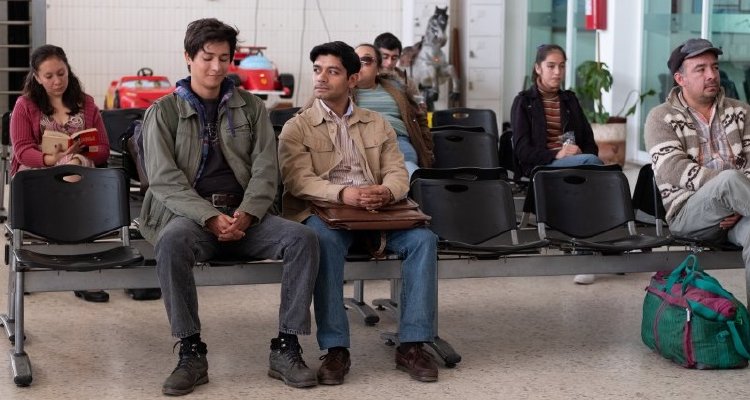 A middle-aged man, Iván, walks down a NYC subway platform scrolling through pictures of a young man.  Ricky is the son Iván hasn’t seen in the twenty years since he ‘crossed over’ from his hometown of Puebla to make his mark as a chef in the United States where, he assures Ricky, “I Carry You With Me.”

Cowriter (with Alan Page)/director Heidi Ewing ("Jesus Camp") makes her narrative debut with a film that has a stepping stone out of her usual documentary fare in that she has fictionalized the story of two friends, who both appear here as their older selves in largely unscripted scenes.  Intimately shot by cinematographer Juan Pablo Ramírez, who finds magic in natural light and artfully obscured compositions, the time shifting film makes a strong statement about U.S. immigration through a personal lens of sacrifice and oppression.

The opening prologue transitions back to Puebla in 1994 where we see Iván (Armando Espitia, "Heli") carrying a young boy slung over his shoulder through an apartment whose elder male and female residents he greets with formal respect.         His relationship with the boy’s mother is cool, but we’ll soon learn it could be much colder if she ever found out what we’re about to – Iván is a gay man passing as straight.

That will become increasingly more difficult once Iván meets openly gay teacher’s assistant Gerardo (Christian Vazquez, "Rudo y Cursi") at the gay club he’s partying at with his firecracker of a childhood friend Sandra (Michelle Rodríguez).  Gerardo seems worldlier than Iván, who is frustrated with his janitorial duties at a restaurant despite his culinary degree.  Dinner with Gerardo’s middle class family will expose his father’s failure to accept his son for who he is, the macho culture’s homophobia setting both he and Iván at equal disadvantage.

Everything comes to a head one night when Iván’s mother, his ex and his son show up on his doorstep unexpectedly.  With Gerardo upstairs, he refuses to let them in, making up a weak excuse.  Ricky’s mother takes the opportunity to voice her suspicions about his sexual orientation and states he will never see his son again.  Heartbroken, Iván makes the decision to leave Mexico in pursuit of the American Dream.  Gerardo has no desire to leave and Iván, while misrepresenting his circumstances, tells Gerardo the U.S. is no place for him.  Then one day he returns to his humble apartment to find Gerardo on his stoop.

Ewing’s idea was a good one, although her execution is sometimes too scattershot and her time jumps confusing due to weak resemblance between her actors and her real life friends.  Still, the story expounds on issues around immigration which are often unexplored and Vazquez and especially Espitia craft characters worth caring about.  Rodríguez’s arc offers a contrast to Espitia’s.  The film has a memorable look and music by Jay Wadley (“I’m Thinking of Ending Things”) is distinctive without relying on cultural clichés.