I Care a Lot 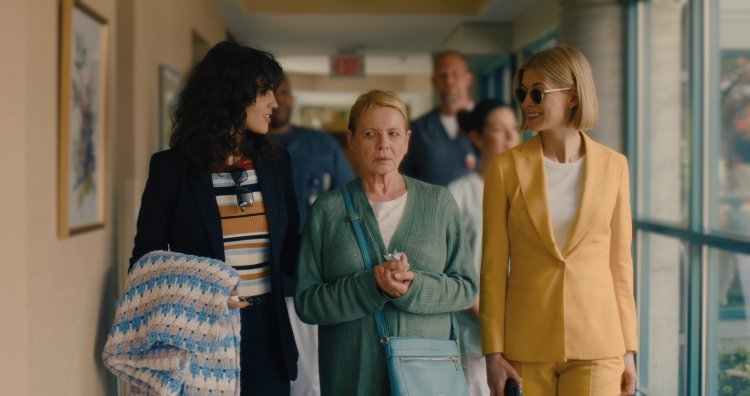 Marla Grayson (Rosamund Pike) believes that ‘playing fair is a joke invented by rich people to keep the rest of us poor,’ and so has let her inner shark loose, making a fortune by having vulnerable seniors declared incompetent and her their legal guardian in court.  After being informed a 69 year-old she’s only had as a client for six months has died, a poor return on investment, Marla’s thrilled when Dr. Amos (Alicia Witt) proffers her a ‘cherry,’ a woman with no living relatives beginning to show signs of confusion.  Jennifer Peterson (Dianne Wiest) turns out to be more than Marla bargained for, though, even as she claims “I Care a Lot.”

In 2018, Laura Checkoway’s Oscar nominated documentary short, “Edith & Eddie,” threw a spotlight on the often abused practice of legal guardianship of the elderly.  It is horrifying how easily seniors can lose all rights which is exactly what we see a Mr. Feldstrom (Macon Blair, "Blue Ruin") violently reacting to in this film’s opening moments as he is barred from even visiting his mother, a victim of Marla’s cold and calculating scam, in the senior care facility in which she’s been deposited.  The situation is so distressing, we wonder just how writer/director J Blakeson ("The Disappearance of Alice Creed") is going to turn this into comedy gold.  The disappointing thing is that he hits that jackpot early, only to blow his fortune.

Marla and her business and romantic partner Fran (Eiza González, "Baby Driver") have a reliable setup, with Amos feeding them clients, gullible Judge Lomax (Isiah Whitlock Jr., "Da 5 Bloods") rubber stamping them and Berkshire Oaks Senior Living manager Sam Rice (Damian Young) controlling them.  And Marla believes she’s hooked a big one when she escorts an angry and bewildered Jennifer from the well appointed suburban home that will be on the market shortly for $1.6 million.  Not only will the cherry red Mercedes and the home’s furnishings bring a pretty penny, but Marla’s found a key and the safety deposit box it belongs to, uncovering a hidden, uninsured, and therefore undeclared, stash of diamonds.

Things begin to take a perplexing turn when a taxi driver arrives to pick up Jennifer as Fran directs movers emptying out the home.  Alexi Ignatyev (Nicholas Logan) isn’t the brightest bulb, neglecting to get any real information from her to report to his boss, Russian mobster Roman Lunyov (Peter Dinklage).  The next thing Marla knows, she’s being visited by lawyer Dean Ericson (Chris Messina), but she refutes his claim of representing Jennifer as she knows Jennifer has no cell phone access.  Marla escalates, demanding Jennifer be put on a brutal, torturous routine, but the woman herself, even sedated, is positively gleeful at the unknown hell her tormentor’s about to walk into.

And that’s the scene where “I Care a Lot” soars into the stratosphere, Wiest deserving a shower of awards for one delicious line reading.  But Blakeson’s assigned Wiest McGuffin status, more interested in pitting the soulless Marla against the Russian mob for the rest of the film.  Thankfully Pike and Dinklage have a lot fun torturing each other in increasingly outrageous fashion, but Blakeson’s attempt to make Marla sympathetic, a protagonist to root for, just never flies.

Pike, featuring a blond bob as precision cut as her killer instincts, is all shiny surface and rotted interior, turning sunny smiles on and off like a light switch.  Having described her character as a ‘lioness’ in the film’s opening moments, it’s amusing to watch her refuse to back down under circumstances most would flee from, then taking the hits and still keep on coming.  Interestingly, as the stakes rise, Pike’s bob is tied back into a short ponytail, mirroring the one Dinklage sports, two sides of the same coin.

And yet despite this amusing matchup, the film is decidedly lesser once Wiest is no longer in play.  The war begins to go on too long.  The film’s production is also a drawback, its cold blue and glass aesthetic unappealing, as is Marc Canham's synthetic score (the film was shot in the Boston suburbs).  “I Care a Lot” goes for a Coenesque tone and nearly achieves it, but perhaps its biggest takeaway is that crimes against humanity can not only be accomplished quite legally, their perpetrators can somehow be more awful than their criminal counterparts.

Marla Grayson (Rosemund Pike) runs a lucrative business as the court-appointed guardian for the elderly deemed a "danger to themselves and others." She legally (and sometimes not so legally) bilks her clients of their money and fortunes until one of her "cash cows" dies and needs to be replaced. She comes across her latest mark, Jennifer Peterson (Diane Wiest), who is not quite the helpless old lady she thinks, in "I Care a Lot."

Writer-director-producer J Blakeson creates a dynamic cat and mouse story where just who is the cat and who is the mouse is up for debate as the story unfolds. Marla is a shark when it comes to protecting her cash flow, even at the expense of the clients she vowed, by law, to "protect." She has a lucrative arrangement with elder care Dr. Amos (Alicia Witt), who "recommends" new clients to Marla's care. She assures Grayson that Jennifer has no living kin and is loaded.

Marla, and her team, descend upon Jennifer's home and inform the elderly lady that the court ordered her to be put into assisted care. Jennifer protests vehemently that she never even saw a judge but is given no choice but to leave home. Marla then begins the process of looting the women, taking her money and selling her home. Things are going very well indeed when a cab appears at the door and the driver instructed to pick up Jennifer. Things are not as cut and dried as Marla had thought.

This is when the cat and mouse story kicks in with the arrival of Roman Lunyov (Peter Dinklage), a mob boss with secret ties to Jennifer. At this point, I thought I knew where this was going but was wrong. In an excess of exuberant coincidences, the battle lines are drawn and the fight between Marla and Roman escalates, often to deadly ends. It is a clever idea, but the constant back and forth and the unsatisfying conclusion left me feeling let down. There is a desire to see the cold-hearted manipulative Marla get her just desserts but how we get there left me cold.

I cannot fault the caliber of the acting talent on display but the use of this talent is sometimes left on the wayside, like Wiest's Jennifer. There is canniness to her character that gave me an oh-boy-is-she-going-to-get-her-revenge feeling, but Jennifer drops out of the picture in favor of the ever shifting cat-versus-mouse game. I was disappointed that there were so many missed opportunities in favor of clever turning of tables (many times).