I Am Love (Io sono l'amore) 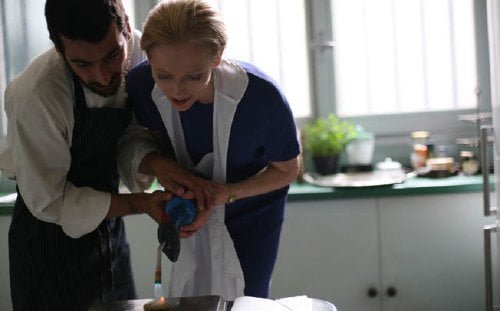 The Recchi family's textile manufacturing factory has established them as Milan business nobility. With failing health, Edoardo Recchi Sr. (Gabriele Ferzetti, "The Night Porter") announces his retirement plan at a party given in honor of his birthday by his daughter-in-law. He surprises his son, Tancredi (Danny Huston doppelganger Pippo Delbono), by including Tancredi's eldest son, bicycle racing Edoardo Recchi Jr. (Flavio Parenti), as his father's equal codirector. But there is more trouble brewing under the calm exterior of Tancredi's Russian wife Emma (Tilda Swinton, "Michael Clayton," "Julia") as she slowly surfaces from his submersion of her identity in "I Am Love."

Writer/director Luca Guadagnino, who seemingly professed his idolization of his star in 2002's documentary short "Tilda Swinton: The Love Factory," has taken two simple themes and whipped up a European melodrama drunk on its own artistry. The mix of Swinton's cool and Guadagnino's fire makes for a unique cinematic experience, but in the end "I Am Love" is a bit simplistic, more style than substance. But what style. We are introduced to the Recchi family as Emma works with her staff to prepare for her father-in-law's party. She's the perfect mix of regal patrician and warm matriarch. This is a woman who makes her appearance like she's stepped out of an issue of Vogue, yet whose homey touch is evident in dinner's first course, a fish soup that is the favorite of her son Edo's. Her head of household, Ida (Maria Paiato), is the closest thing she has to a friend. Emma's three children are each a symbol. Her youngest son, Gianluca (Mattia Zaccaro), is an anti-change traditionalist. Elisabetta (Alba Rohrwacher, "Days and Clouds"), the middle child, is all about embracing the new. Edo is Emma's bridge to her past. We can see these elements in play before and during dinner. Emma's fish soup is a Russian tradition passed down from her grandmother, yet we never hear Emma speak Russian to anyone but Edo, and then, only under duress. Betta presents her grandfather with his birthday gift and he is clearly displeased when her usual painting has been replaced by photography - only Emma quietly praises the work. Tancredi, who we will learn bestowed the name Emma on his wife to replace her Russian moniker, is clearly proud of her and his family, but we are given no hint of the inner workings of his and her marital life. Edo, who has lost his first race that day, has a surprise visitor in the victor - local chef Antonio (Edoardo Gabbriellini) bearing a cake for the festivities. Before long, they become fast friends, Edo more interested in partnering in Antonio's El Bulli-like restaurant dreams in the country than the family business. Emma, too, becomes enamored. Then she finds a CD of Betta's professing love for another woman. Betta returns from college with her long, blonde locks lopped off and this, too pleases Emma. At lunch with Betta and mother-in-law Allegra (Marisa Berenson, "Cabaret," "Barry Lyndon") at Antonio's father's downtown restaurant, Emma communes with his food, a secret message from him to her. On a trip to see Betta, she stops off in the town where Antonio and Edo plan to go into business together and runs in to him, as she had hoped. Before long, Emma's natural name has been restored, her own locks shorn, her designer clothes replaced by peasant wear to work in his gardens. A love making scene seems influenced by Pascale Ferran's "Lady Chatterley," all extreme close ups of skin, flowers, insects. (Later, in bed with Tancredi, an insect becomes trapped within a bedside lampshade.) But although Edo may be a bridge to Emma's past, when he sees her future he clings to the present and tragedy ensues. Even so, Guadagnino gives Emma a thunderclap of an exit. The director may not be subtle, but his overripe melodrama springs from passion. The production is drenched in old world Europa, from the opening b&w shots of snow drifting down upon Milan to the family manse, all marble, wood and soaring ceilings. Cinematography by Yorick Le Saux ("Swimming Pool," 2008's Swinton starrer "Julia") is both beautiful and psychological in how he frames his subjects, Emma sometimes seen in Dutch angles. Original Music by John Adams, whose compositions were used on the "Shutter Island" soundtrack, is almost delirious, its crescendos thundering beyond obviousness. "I Am Love" is definitely one for cinephiles, a Sirkian melodrama given lush Italian art house treatment with the mad dab of alienness that is Swinton herself.