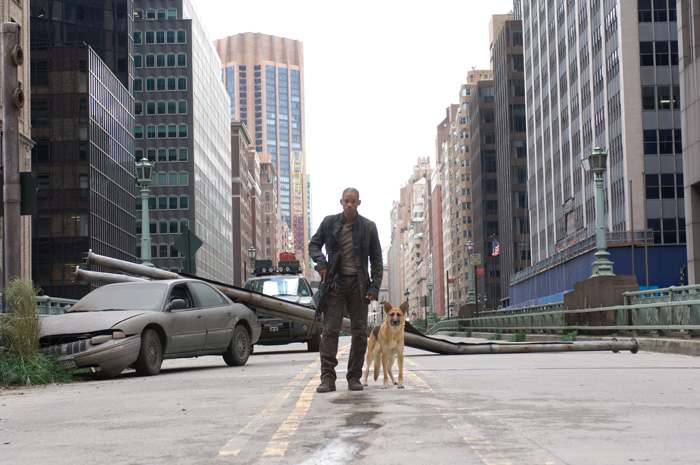 "My name is Robert Neville. I am a survivor living in New York City. If there is anybody out there…anybody. Please. You are not alone.” Robert Neville (Will Smith, "The Pursuit of Happyness") is a scientist and a survivor of a virus which devastated the human race. Those that remain are The Infected, vampiric monsters which nest throughout New York City. Neville persists, though, with a daily radio broadcast reaching out to other potential survivors and with his quest to find a cure for The Infected using his own immune blood in Mark Protosevich ("The Cell") and Akiva Goldsman's ("Cinderella Man") adaptation of the Richard Matheson novel, "I Am Legend."

This next "Will-Smith-holiday-blockbuster-waiting-to-happen" is a mixed bag in both its story execution and special effects. "I Am Legend" has a new idea or two up its sleeve, but is sure to disappoint purists and while its computer generated images of a New York City overgrown with weeds and run down with neglect are thoroughly convincing, any living being created via hard drive is so thoroughly cartoonish that any real threat is vaporized. Will Smith's last lonely man hanging on by his relationship to his German Shepherd Sam, a tableau of mannequins at the local DVD rental and recordings of old Today shows is affecting, but the coda which creates his titular 'legend' is underwhelming and familiar. The film begins in flashback, as Dr. Crippen (Emma Thompson sporting the name of a notorious early twentieth century murderer) is being interviewed on television for having cured cancer by rearchitecting a virus. As everyone who has ever seen a movie knows, bad things happen when we mess around with Mother Nature. Many years later, Neville is racing around in a supercharged hot rod, Sam in the passenger seat, shooting at herds of deer bounding about Manhattan (none of which look remotely real - they're too ethereal). We learn about Neville's routine - going out in the day time, shuttering windows when his watch beeps dusk (Neville, who was an Army Colonel, somehow afforded an inner city mansion right across the street from Washington Square's Memorial Arch). He also visits his underground laboratory, where he produces serums to try on infected rats, hoping to crack a cure for the cure which devastated mankind. As his daily broadcast announces, he can be found at the Seaport Pier every day at noon, when the sun is highest in the sky, where he amuses himself waiting for survivors by chipping golf balls off the Intrepid. On the way home one day, things go horribly awry when Sam tails a deer into a dark, cavernous space. Terrified, Neville nonetheless enters to save his only friend. This suspenseful sequence gives the audience its first taste of infected humans and the very first taste is a nasty one, but when Neville returns the next day to capture one, a closer look proves disappointing. Oddly, just as Neville describes the human race as having lost all semblance of humanity (the infected move in the new, fashionable fast-fast-fast), the nest's Alpha Male (Dash Mihok, "Kiss Kiss Bang Bang," "Firehouse Dog") shows signs of both learning from Neville and being bound and determined to retrieve the Alpha Female (Joanna Numata) stolen from him. Director Francis Lawrence ("Constantine") feeds us the back story by feeding us the night Manhattan was evacuated in small, effective bites that culminate just when Neville's birthday brings him his worst day since. Then "I Am Legend" goes off the rails with an impossible off screen rescue and a survivor, Anna (Alice Braga, "City of God"), who hears the voice of God but has never heard of Bob Marley, the hero Neville named his young daughter after. The ending feels like M. Night Shyamalan gone all wrong adapting Stephen King. Still Will Smith gives a solid performance and Sam is sure to become legend among Hollywood canines.