I Am Big Bird: The Carroll Spinney Story 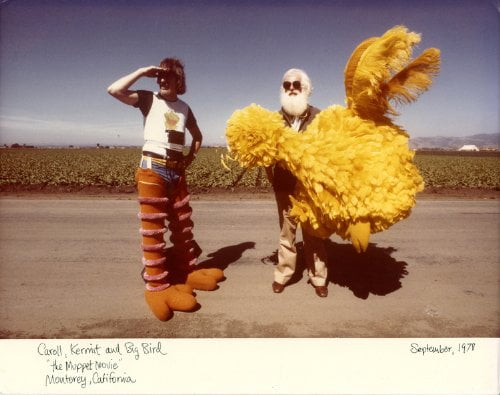 You would have to have spent the last four decades living on a desert island with no communication with the outside world if you never heard of Big Bird. But, what do we known about the man, Caroll Spinney, who brought that eight-foot tall bright yellow bird to life? That question is lovingly answered in “I Am Big Bird: The Caroll Spinney Story.”

Carroll Spinney loved puppets since he was a young child and became an entertainer with his own TV show during his years in the Air Force. After leaving the service, he partnered with Judy Valentine at Boston's local PBS station, but when their show wasn't picked up, the duo were incorporated into Bozo the Clown's. Unfulfilled by that show, Spinney traveled to a puppet festival in Salt Lake City where he met Jim Henson, who not only recognized the man's talent but paired him with the perfect Muppet characters during 'Sesame Street's' first season. Now eighty, Spinney continues to inhabit everybody's eight foot tall feathered friend because as he will tell you, "I Am Big Bird." Four years after "Being Elmo: A Puppeteer's Journey" promoted the idea that a Muppet character embodied love, along come the documentarian duo Dave LaMattina and Chad N. Walker to reinstate the legacy of Sesame Street's original star. But where Kevin Clash, who subsequently resigned as Elmo's puppeteer after allegations of sexual misconduct with minors, appeared to have led a charmed life leading into Sesame Street, Carroll Spinney has an entirely different story, abused by his father, devastated by a divorce from a woman who never connected with her husband's art, a loner among the family that is 'Sesame Street.' LaMattina and Walker had a wealth of material to work with, Spinney having documented his own life since the 1950's. Editing this together with broadcast material, behind the scenes footage, animation and past and present day interviews, the filmmakers tell Spinney's story in traditional, linear fashion, but boy have they chosen a great subject. They also prove their argument that the puppeteer and his characters (Spinney also is Oscar the Grouch) are one and the same, a loner who found and radiates love. Spinney had a great lack of self confidence when he first went to work for Henson, so much so that he was going to quit (in interviews, Frank Oz's words are harsh, suggesting he's not Spinney's biggest cheerleader, noting how he didn't fit in). But Henson took a personal interest, becoming the man's friend outside of work, something that meant so much to Carroll. Spinney was expecting a call reporting his dad's death when Henson's came and his grief is still palpable. Footage showing Spinney as Big Bird singing Kermit's signature song at Henson's funeral is both incredibly moving and a great tribute. The other two most notable aspects of the documentary are Spinney's courtship of his second wife Debra, one that sounds serial killer creepy until the payoff, and an animation detailing just what goes into being Big Bird. The physical demands of puppeteering the eight foot bird are incredible, more so considering he's still going strong, albeit a bit drooped, at eighty. After establishing the difficulty just in making Big Bird walk and talk, the filmmakers follow with scenes of Big Bird on horseback, on a trampoline and riding a unicycle! There are a few odd notes in addition to Oz's stern commentary. Spinney so loved China after traveling there with Bob Hope that 'Big Bird in China' was created, but his young costar, Lien-Tze Quyang, describes feeling abandoned when the production wrapped, the filmmakers fail to investigate why Carroll and Debra's letters went unanswered and a subsequent reunion feels forced. And while it is noted that Elmo stole Big Bird's limelight, Kevin Clash is never seen or mentioned. If initially the film's score is composed of the type of magical violins that accompany family movies, as the documentary goes along, the music degenerates into outright sap. Thankfully that's one thing Big Bird will never be accused of. Grade:

I remember, way back when Sesame Street first came on PBS, I would sit with my 2-year old nephew and we would both be mesmerized by Big Bird, Oscar the Grouch (also played and voiced by Spinney) and the rest of the Street characters. These fond memories are revitalized by documentarian directors Dave Lamattina and Chad N. Walker with their in-depth chronicle of a man beloved by billions around the world. Utilizing what must be thousands of hours of footage from Spinney’s own archive, the filmmakers tell a concise (90 minutes) chronicle of the life of Caroll Spinney from his early days as an amateur puppeteer as a kid to today, with Caroll still performing as his iconic characters. But, the film is not just a document about Big Bird or Oscar. It is a history of one of the longest running programs on television, the creation of the Muppets and the story of a man who is truly an ambassador to the world. The main thing I got out of “I Am Big Bird” is this: Big Bird = unconditional love.