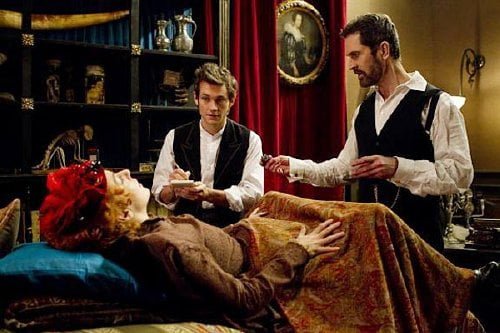 Dr. Malcolm Granville (Hugh Dancy) is a dedicated but struggling young doctor in 1880 Victorian London. Up to date on the latest medical methods, like maintaining a sterile, germ-free operating theater, Malcolm has to fight the antiquated, filthy practices of his colleagues and, at that time, it is a losing battle. Things change for the idealistic young physician when he interviews with Dr. Robert Dalrymple (Jonathan Price) and is offered a job to help treat the woman of London who suffer from “Hysteria.”

Dr. Mortimer Granville's (Hugh Dancy, "Martha Marcy May Marlene") allegiance to modern science made him unpopular with the older doctors responsible for his employment and so, at wit's end, he decided to sell out by assisting Dr. Robert Dalrymple (Jonathan Pryce, "Something Wicked This Way Comes") in his lucrative practice 'massaging' the nether regions of Victorian ladies suffering from "Hysteria." Sony Picture Classics presents one of its atypically weaker releases with the provocative idea of the invention of the electric vibrator during the height of Victorian prudery fictionalized into a romantic comedy which pushes the real Granville into the arms of the unconventional Charlotte Dalrymple (Maggie Gyllenhaal, "The Dark Knight"), a women's rights activist too modern for her time period. Gyllenhaal gives a delightful performance, but the film's secret weapon is Rupert Everett ("My Best Friend's Wedding") as Mortimer's wealthy friend of 'perverse' sexual appetites and penchant for inventions. After a review of the wrong-headed medical practices of the time, we follow Mortimer to an interview with Dalrymple where he is hired right away at a high salary with room and board to treat women whose bouts of weeping, nymphomania, frigidity, melancholia, or anxiety are diagnosed as hysteria, a female disease afflicting a quarter of London's women. On his first day, Mortimer observes one of Dalrymple's sessions, where a woman lies back on a coach with her feet spread beneath a brass canopy curtained with velvet drapes. Forty-five minutes to an hour later, the patient's thrashing indicates the desired 'hysterical paroxysm' has been achieved, bringing with it a shift in the uterus and decompression of the nervous system. If this all seems more than a bit creepy, rest assured that Victorians had no concept that women could experience sexual pleasure. Which makes it puzzling just how Charlotte does. Mortimer is thrilled because his new boss has a daughter, Emily (Felicity Jones, "Like Crazy"), who is the ideal of a modest English rose, but he's taken aback to learn that the outspoken, immodest Charlotte is her older sister. She runs a settlement house in East London caring for abused women and their children when she's not demonstrating for the right to vote and calls her father's practice just about what we would today. She's also always short of funds and when her own father orchestrates the closure of her shelter, she decks a policeman and ends up in court - where Granville is called to testify to save her from prison with a diagnosis of - you guessed it - which would land her in a sanitarium and with a mandatory hysterectomy scheduled. The device itself starts, here at least, as a feather duster powered by Edmund St. John-Smythe's (Everett) indoor generator. A light bulb goes off when Mortimer, fired yet again when felled by the hand cramps frequently suffered by those in his profession, realizes the device's vibrations relieve his pain. "Hysteria" is a cousin to Alan Parker's "The Road to Wellville," where a British director took on the American story of Dr. Kellogg's obsession with colonic cleanliness. Neither is successful leaning on a turn of the century medical curiosity for prurient laughs, although "Hysteria" works perhaps a bit better. Still, there is the problem of Gyllenhaal's character seemingly beamed in from another age and the utter blandness of Jones and Pryce, who does not even make his complete lack of morals or empathy villainous. Dancy seems dizzier than most of his patients, but he does have a delicious matter-of-factness dealing with his obviously homosexual benefactor. In supporting roles, musical theater star Kim Criswell, "Four Weddings and a Funeral's" 'Duckface,' Anna Chancellor and particularly Georgie Glen ("My Week with Marilyn") as the twinkly widow Mrs. Parsons, help make the medicine go down, but writers Stephen and Jonah Lisa Dyer don't even try to explain why Dalrymple would keep known prostitute Molly (Sheridan Smith), one of Charlotte's rescues, on as a housemaid when he refuses to support his daughter's more conventional charitable pursuits. "Hysteria" is a harmless lark that invites questions and curiosity about its subject which it is too uncommitted to address. Gyllenhaal is so much fun, she almost makes us forget just how anachronistic her character is.

Only a woman could get to the essence of the story of a man who changed the whole Victorian world when he invents the device that became known as the “vibrator” and is used, in all its multitudinous incarnations, to this day. Director Tanya Wexler takes this true story (Dr. Granville patented his hysteria-dispelling device circa 1880) and tells it with humor and a pro-femme edge. The Victorian backdrop and the treatment for the “woman’s illness” has an innocence about it as naïve Dr. Granville enters the world of women’s hysteria. The treatment consists of manual massaging of the “pelvic region” of the patient until the sought after “hysterical paroxysm” is achieved. (We use different words these days.) The process was time consuming and, for Dr. Manville, quite painful. Dr. Manville shares an apartment with his inventor friend and benefactor Edmund St. John-Smythe (Rupert Everett in a drolly funny comic relief role as a man who decidedly does not desire women) and suffers from painful cramping in his right hand when he provides the physically-demanding femme massages. Edmond is working on his latest invention, an electric rotating feather duster and, on a particularly painful day, Malcolm absent-mindedly fiddles with the device as Edmund turns it on. Immediately, the vibration of the electric motor relieves Malcolm’s pain and stimulates his hand muscles. The proverbial bulb lights up in his head and a new era for woman-kind begins. Early on in “Hysteria,” after he begins working for Dr. Dalrymple, Granville meets his employer’s youngest daughter, Emily (Felicity Jones), a beautiful, demure young woman who specializes in phrenology – the reading of head bumps. Emily is all a young doctor could want in a wife and Malcolm begins the courtship and makes plans for marriage. That is, until he meets Charlotte (Maggie Gyllenhaal), Dalrymple’s eldest, and finds - though not at first - that the pretty, head-strong, feisty and intelligently forward-thinking feminist is really the woman for him, an equal in every way. The combination of history and romance is nicely, and satisfyingly, woven. The screenplay by Stephen Dyer and Jonah Lisa Dyer, from an original story by Howard Gensler, uses the true life invention of the vibrator and builds a light-hearted Victorian romantic comedy that pokes fun at the naivety of the men of the time. Then, men could not conceive that the treatment for hysteria is pleasurable to women and the filmmakers make the most of the “silly old Victorians” and their unsophisticated ways to show just how enlightened we have become in a mere 140 years. The production is superb and captures the look and feel of Victorian London in its period art design and costume. Lensing by Sean Bobbitt is crisp and utilizes the film’s color palette with vivid clarity. The dialog is witty, rather than outright funny, and its delivery is nicely handled by all the players. The lightness of heart in “Hysteria” makes it a likable movie with equally likable characters (all well played),