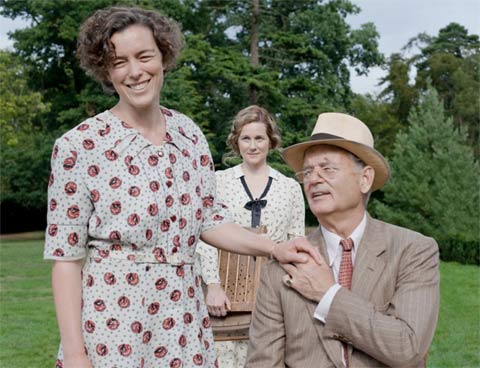 In 1939, Margaret 'Daisy' Suckley (Laura Linney) was surprised to get a telephone call from the President's mother. Mrs. Roosevelt (Elizabeth Wilson, "The Birds," "The Addams Family") thought that perhaps Daisy, a fifth cousin, could take Franklin's (Bill Murray) mind off the enormous pressures he was facing. Daisy not only obliged, but became part of the inner circle at FDR's birthplace, "Hyde Park on Hudson."

Here's a trivia question - what movie features an underwater shot of Bill Murray in a swimming pool, costars Olivia Williams as his romantic partner and prominently features hand jobs? The answer could be "Rushmore," but it's also "Hyde Park on Hudson," surely the biggest dud of the 2012 'Oscar season.' British director Roger Michell ("Notting Hill," "Morning Glory") and screenwriter Richard Nelson ("Ethan Frome") present a major historical event - the first visit of a reigning British monarch to the U.S., at the dawn of WWII no less - but wrap it in the stifling P.O.V. of Daisy, a character of no interest other than her luck at having been thrust into this setting. Except for the consternation of George V (Samuel West, "Iris," "Van Helsing") and his Queen, Elizabeth (Olivia Colman, "Tyrannosaur," "The Iron Lady"), at having to suss out the meaning of American hospitality in the hands of anti-royal Eleanor and FDR's smooth manipulation of all involved, "Hyde Park on Hudson" has nothing to offer. Daisy rushes right off from her aunt's (Eleanor Bron, "Help!," with little to do) rural home to meet with her famous cousin, who engages her via his stamp collection (he later will tell George that it is his usual calling card with women). Linney plays Daisy as such a mouse, it's difficult to see any connection between these two. They enjoy drives around the countryside. Eventually FDR waves off his police escort to detour down a dirt road. Don't come a'knockin when the jalopy's a'rockin. This scene is genuinely off putting. The film also makes no bones about presenting Eleanor as a bull dyke anti-royal. Immediately, we learn about her 'she-men' and separate living arrangements and her stance against royalty paints her as wishing to almost demean her guests. Credit Olivia Williams, with only a dental device to prop up the illusion, for being somewhat believable in the role. With her mother-in-law staunchly anti-alcohol, FDR needs to appease a houseful of women while handling a delicate state visit. And then Daisy finds out that she's not the President's only 'special friend' right in the middle of it all. So we now have a portrait of FDR as a diplomatic genius with a strong wife and a weakness for what she calls 'adoration from young girls,' kind of like Bill Clinton. (It should be noted that Linney is the same age as Daisy was at the time these events took place - 48.) The Queen will wonder why FDR's home is known as Hyde Park and so will we, as the historical house is called Springwood, but Springwood is in the town of Hyde Park which itself is on the Hudson River, hence the tie from Dutchess County in upstate New York to London. Thank God for Simon West and Olivia Colman, because it is this first trial of the reluctant King (George inherited the throne when his brother abdicated to marry American divorcee Mrs. Simpson) and his quiet bride (the future 'Queen Mum'), that gives this film any interest at all and theirs are the only performances which cannot be faulted. Murray never feels right as FDR, but his best scene is his private tete-a-tete with George, in which he bolster's the young man's confidence comparing handicaps and wives. The filmmakers seem to get the importance of the selling of the royals with the common man's touch (King George eats a hot dog!) but fail utterly making their protagonist, Daisy, in any way interesting. "Hyde Park on Hudson" presents a canny bit of political maneuvering at a huge moment in American history and wraps it in a distasteful Harlequin romance. At least they go out with a bit of toilet humor that's actually funny.