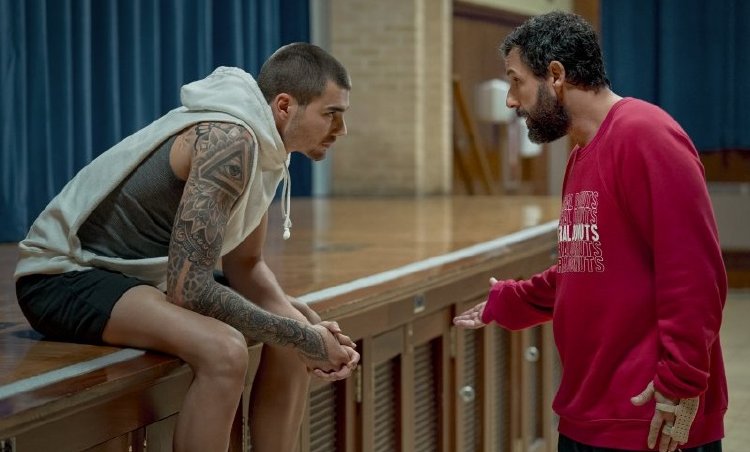 When Philadelphia 76ers scout Stanley Sugerman (Adam Sandler) nixes the draft pick everyone’s calling the ‘German MJ,’ team owner Rex Merrick’s (Robert Duvall) son Vince (Ben Foster) says he’ll kill someone if they don’t get him.  Rex not only goes along with Stan, but promotes him to the job he’s longed for, Assistant Coach.  But before the news is even out, Rex dies and Vince demands Stan go back out on the road and find the player that will turn their team around in “Hustle.”

After costarring with the Celtics’ Kevin Garnett in “Uncut Gems,” producer/star Sandler appears to have involved half the NBA in his latest, a Rocky-esque underdog tale about a scout putting it all on the line for a Spanish construction worker.  While the audience may be able to anticipate every move of the film’s narrative (from 2018's "A Star Is Born’s” Will Fetters), Sandler’s heartfelt commitment and “We the Animals” director Jeremiah Zagar’s firm command of his cast, drama and court action combined with cinematographer Zak Mulligan’s inventive shooting make “Hustle” a real winner.  Savvy casting of the NBA’s Juancho Hernangomez as Sugarman’s find Bo Cruz helps too, the towering player countering amazing court moves with vulnerability.

While Stanley fervently believes that Cruz is the one, he’s sideswiped at the airport where he learns the 22 year-old has an assault conviction from five years prior, news which spreads quickly in the sports world and which Vince, jealous of Sugarman’s ability and favored status with his late dad as he tries to make his own mark on the team, almost salivates over.  Then another player, Kermet Wilts (Hernangomez’s former Minnesota Timberwolves teammate Anthony Edwards) gets into Cruz’s head during tryouts and he loses his cool.  Vince turns him down and Stanley quits.  But Stan doesn’t give up, instead making a huge gamble backing the player on his own while allowing Cruz to believe he’s backed by Phillie.

The film is threaded throughout with a ‘team’ theme of supportive relationships.  Sugarman is backed not only by the 76’s original owner, by but his wife Teresa (Queen Latifah), a college track star with her own sports antennae, and agent and former teammate Leon Rich (Kenny Smith).  Teresa goes where Stan won’t, calling on an old friendship with Dr. J when it’s needed most. Cruz literally wears his heart on his sleeve, one entire arm tattooed in honor of his mother Paola (María Botto) and young daughter Lucia (Ainhoa Pillet).  Paola, in fact, will pinpoint just what’s holding her son back – his inability to give himself as much priority as he gives others – and note that Stanley is every bit the ‘oak tree’ for him as she has been.

While Sandler is definitely in dramatic territory, “Hustle” has plenty of humor, from the Big Serbian (Dallas Mavericks player Boban Marjanovic) claiming to be 22 despite his adult son to Stan’s teenaged daughter and his amateur videographer Alex (Jordan Hull) crushing on Cruz.   Sandler’s a natural keeping one sneaker on either side of the midcourt line.  More surprising is Zagar’s leap from an intimate family indie to this high octane commercial film, a move he makes with stylish assurance.  The film’s Rocky-esque training sequence, which moves from the court to the streets of Philadelphia, may go on a bit too long, but otherwise the film never falters.  It is especially satisfying to see the care involved in shooting game action with a camera that weaves within the players when it’s not being worn by them or below the plexi-glass floor they’re playing on.

There’s just so much more to “Hustle,” which also features SNL’s Heidi Gardner and a host of Philadelphia rappers.  It’s past time to take Adam Sandler seriously.

Stanley (Adam Sandler) has been a scout for the Philadelphia 76ers for many years and dreams of being the assistant coach. He gets his big chance from team owner, Rex Merrick (Robert Duvall), but it is a short-lived tenure when the boss dies and his son, Vince (Ben Foster), takes over the team and fires Stan. The scout must hit the road once more, this time to find and groom the next MVP for the NBA in “Hustle.”

Back in the late 1980s, Adam Sandler made his debut as Smitty on “The Cosby Show” and has been a juggernaut for goofy comedy every since. Then, in 2002, he made “Punch Drunk Love” with director-writer Paul Thomas Anderson and proved he has a knack for drama, even when it is comedic. He went on to such other serious fare as “Funny People (2009)” and, one of his best, “Uncut Gems (2015)” with Benny and Josh Safdie. Now, with “Hustle,” we get Adam Sandler playing Adam Sandler, the sports fan.

While much of the plot machination is telegraphed early on in this dual rags-to-riches tale, Sandler, as usual, carves out a likable, if troubled, character. Stanley has given his all for the 76ers and earned the promotion he so richly deserved. When Rick dies, though, the spoiled son, who always resented Stan for being almost like a son to his father, shatters the scout’s dreams.

Once the premise is laid out, the real story begins as Stanley goes back on the road but, this time, with a very different agenda. His latest travels bring him to Spain and, when he hears the shouts of a crowd, he investigates. What he finds in a big lanky young guy, Bo Cruz (Juancho Hernangomez), in work boots, taking on all comers on the court and besting them all. Stanley is totally impressed and makes big promises of fame and fortune to the potential NBA pick.

The rest of this fairy tale is about the obstacles Stanley must face to make the dream for him and Bo come true. The path is littered with clichés and some forced coincidences but Sandler, the consummate pro, makes it all enjoyable. Utah Jazz player Hernangomez makes his acting debut as a talented basketball player, so that part is no stretch.

Director Jeremiah Zagar. In his second feature film, has the good fortune to have Adam Sandler as a participating force in getting the film done. The actor’s real life love of basketball goes a long way to integrating that love into Stanley and his life. Queen Latifah, as Stan’s wife, adds a dimension of love and support for her man through thick and thin in a nice addition to the story. Ben Foster, as spiteful son Vince, is a two-dimensional bad guy you want to get his just desserts. All he needs is a mustache to twirl.

In the end, “Hustle” is a likable sports movie that is another showcase to display the equally likable Sandler.