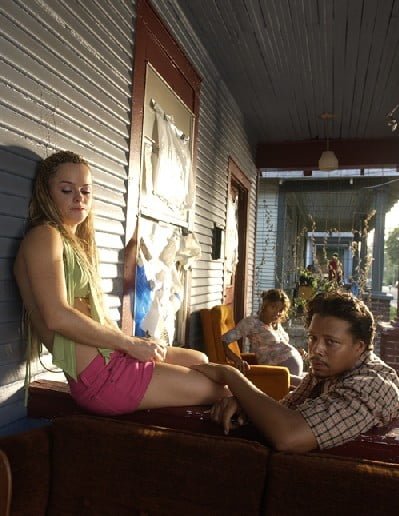 DJay (Terrence Dashon Howard, "Crash," "Ray") is a Memphis pimp with true affection for his girls and real frustration with their station in life. When DJay runs into old high school buddy Key (Anthony Anderson, "Harold & Kumar Go to White Castle") and finds out he's a professional sound engineer, he sees a way out, believing he can be just like home town boy Skinny Black (Ludacris, "Crash"), a huge rap artist. But breaking out of a rut isn't easy and DJay really has to work the "Hustle & Flow."

All too often, 'hits' from the Sundance Film Festival make one wonder how altitude affects audiences. 2005's Audience Award winner is the real deal, though. Writer/director Craig Brewer may be accused of sugar coating the lives of a pimp and his whores, but he and his cast have created such slam dunk terrific characters, that one can suspend one's disbelief and giddily get into their groove. The film begins with a tight shot of DJay (Howard, in a breakthrough role if ever there was one, delivering a beautifully written soliloquy) as he offers his philosophy on why men are like dogs except for the fact that dogs never question their purpose. The camera pulls back (cinematography by Amy Vincent, "The Caveman's Valentine") to reveal that he's talking to Nola (Taryn Manning, "A Lot Like Love," "8 Mile"), one of his three girls, in his Chevy Caprice Classic (complete with rust-proofed front fenders). Djay's not merely disgruntled for his own situation, but clearly he thinks Nola should be aiming higher herself as well (and when she does, it's corny as hell, but satisfying). All of a sudden, things start to click for Djay. At Arnel's Bar, the owner (Isaac Hayes, "South Park's" Chef) confides that Skinny will be in town and that DJay should procure some 'good stuff' for him - a brush with fame all but assured. A junkie hard up for money sells him a Casio keyboard for a quarter. Key's impressed with what he hears and brings in Shelby (DJ Qualls, "The New Guy") to provide the beat. Then the hurdles start rising. Key's wife Yevette (Elise Neal, "Paid in Full," "Mission to Mars") is less than pleased he's spending time in a whore house. Lex (Paula Jai Parker, "She Hate Me," "Phone Booth"), DJay's 2nd income, gets troublesome, so DJay throws her and her kid out, upsetting Nola and Shug (third girl Shug (Taraji P. Henson, "Baby Boy") is sidelined with a pregnancy). Equipment failures and professional friction add to the mix, but in the midst of the mess, something exciting is happening - this tight little group is giving birth to a new sound. Once you get over the lack of ugliness in Djay and his girls' characters (Djay's shoving Lex out the door is his worst display of violence), there isn't anything that doesn't feel positively real. The film has the gritty look of a 70's exploitation film (love those opening credits scrawled in bright yellow retro bubble letters) and the Memphis locations (production design by Keith Brian Burns, art direction by Alexa Marino, "2 Fast 2 Furious") are as down at the heels as the characters. Situations and dialogue are recognizably human and regionally exotic. Original music by Scott Bomar, Al Capone and Three 6 Mafia is infectious, especially as Djay, with the help of his associates, morphs from 'Beat that bitch' to his signature line 'Stomp that trick.' Costume (Paul Simmons, "Dead Presidents"), makeup and hair (DJay uses a curling iron on his, Nola sports multi-colored long braids) are exemplary. This is one of the year's best cast ensembles. Howard, with his lazy diction and betwixt and between body language, is a potential dark horse Oscar nominee. It's great to see Manning, who showed early promise in "Crazy/Beautiful" only to coast around in unsatisfying roles, really get a chance to strut her stuff. Anderson is solid as usual and Squalls is finally cast in a role that doesn't rely on his odd looks for comedy, instead getting a chance to create a real character. Ludacris chalks up another acting notch after a fine performance in "Crash." And Taraji P. Henson is simply a revelation as the loving, innocent Shug. The look of wonderment that spreads across her face when she first hears her backing vocals played back is one of the great movie moments of 2005. "Hustle & Flow" may initially elicit indulgent smiles with its too-good-to-be-true Memphis hustlers, but it'll win you over bit time. It's a thoroughly entertaining film that deserves to break out big.

DJay (Terrance Howard, “Crash”) is a low-level hustler trying to eek out a living selling his women on the streets of Memphis. But, his hustle is bringing in less and less money and, besides, his heart is no longer in the prostitution game. A chance encounter with his old high school buddy, Key (Anthony Anderson), a sound engineer unhappy with his own career, turns out to be a catalyst for the DJay to change his life and his “Hustle & Flow.” It’s been getting increasingly tough to work his tricks on the street and take care of his illegitimate child and his girlfriend, Shug (Taraji Henson), very pregnant and no longer plying DJay’s trade. But, in his heart, he is a poet just waiting to bust out. He writes down his words faithfully but doesn’t know what to do beyond that. He meets Key, they talk old times and the engineer invites DJay to a recording session for a talented R&B singer. The hustler is blown away and, suddenly, knows what he has to do to break free of his illicit life First time writer/director Craig Brewer creates a modern fable that eschews the hardcore reality of life on the streets of Memphis and the inherent violence of hustling flesh. DJay is a pimp but one with a good heart who honestly cares for his girls. There is, for lack of a better word, a wholesomeness about “Hustle & Flow” that could have had a manufactured feel but, with a tour de force performance by Terence Howard, fine supporting performances, good writing and directing and a solid original music repertoire, Brewer pulls it out of the hat. Sure, we’re dealing with a man who sells the flesh of his woman for the ready cash they bring. And, there is an undercurrent of potential violence in DJay that he uses to keep control of his house. When one of his women, Lexus (Paula Jai Parker), challenges his authority, he readily slaps her around and throws her out onto the streets. But, when he is not being challenged, he is thoughtful and kind. Howard makes this unbelievable person into a real, three-dimensional man with feelings and ambitions like us all. He is the best thing in a film with a lot of good things going for it. The characters supporting DJay are also too good to be true but their enthusiasm and screen presence helps Brewer attain something special. Most notable is Taraji Henson as sweet, pregnant Shug. She loves DJay and is just pleased to have his love and attention. When he begins his recording career, he drafts Shug to record the hook for DJay’s first song, “Whoop That Trick.” The look on Shug’s face when she hears her voice, for the first time, is so joyful that it, alone, is worth the price of admission. Anthony Anderson lends his acting skill to Key who has followed the straight and narrow path but has the same frustrations and ambitions as his pimp friend. Also well played is Tamryn Manning as DJay’s number one trick, Nola. She’s a sweet hooker who will do anything for her manager and only wants to be loved and cared for. DJay’s is an unconventional household but one with no shortage of love. Rubber-faced D.J. Qualls, as scrawny white musician, Shelby, is a device to show that race is irrelevant when it comes to musical talent. Shelby knows his art and gives DJay the music he needs to change his words to song. Rapper Ludacris plays the small but vital role of Skinny Black, a Memphis local who went on to music fame. The coming home hero becomes the catalyst that, through unexpected means, launches DJay’s own career while almost destroying it. The look and feel of “Hustle & Flow” belies the film’s small budget, thanks to producer John Singleton who led the effort to bring Brewer’s story to the screen. The original music by Scott Bomar is first rate. I am far from being a fan of hip-hop and crunk but the construction and execution of “Whoop That Trick” has the tune, enjoyably, playing in my head long after seeing the film. Hustle & Flow” may seem a fairy tale but there is still an edge to it in its finale. There may be a minimum of the nitty-gritty street life of sex and drugs but it isn’t treacle, either. Its themes of hope and “everyone’s gotta have a dream” are positive and uplifting.