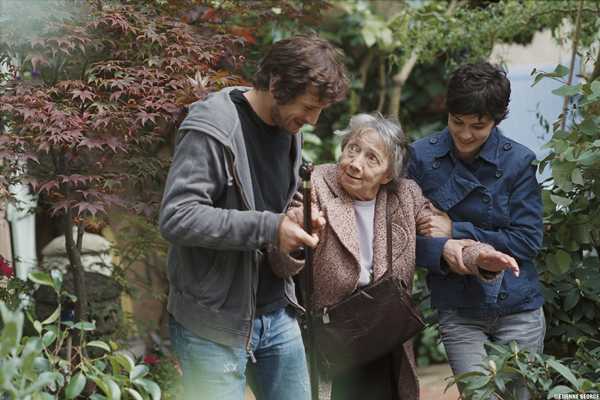 Camille Fauque (Audrey Tautou, "Amélie," "Priceless") is a talented artist who drinks too much, eats too little and makes a meager living cleaning offices. When a neighbor forgets the code to buzz himself in, she impulsively invites him for a picnic in her tiny garret. Philibert (winner of promising newcomer Cesar, Laurent Stocker) turns out to be the Marquet de la Tubelière who lives in his grandmother's ostentatious, old world courtyard dwelling and when Camille falls ill, he moves her in to take care of her. Camille and Philibert's gruff roommate, young chef Franck (Guillaume Canet, "The Beach," "Joyeux Noël"), do not get along, but clearly they are made to as the members of the patched together family go "Hunting and Gathering."

Vet writer/director Claude Berri ("Jean de Florette," "Uranus"), adapting Anna Gavalda's novel, gives us a French version of a tale that's become all too familiar in American Independent filmmaking - that of a family constructed from the broken remains of several. There is nothing terribly surprising about a romance that begins in antagonism, nor maternal love skipped over a generation, but newcomer Stocker as the stuttering caregiver sweetens the film with gentle comedy. Alas, his story slides to the background as Camille and Franck's takes center stage. Philibert arrives at Camille's shoebox of a living space attired in a tux and carrying a picnic basket of china emblazoned with the family crest, but he's no snob. Au contraire, despite the way he cherishes family heirlooms (including such things as Moroccan carpet slippers), Philibert rejects his stuffy family. Philibert makes his living at a museum gift shop where he meets an actress (Sandrine Mazéas) with an idea to cure his stutter. Franck, meanwhile, works twelve hours a day, six days a week, as a promising chef. He unwinds by drinking, playing music too loud and fooling around with slutty women. His day off is spent with the grandmother, Paulette (Françoise Bertin, "The Flower of Evil," "L'Enfer"), who raised him and who is convalescing after breaking her hip. Paulette lives in fear of being put into a nursing home and worries about her pets back home. Camille has a tense relationship with her mother (Danièle Lebrun, "A Tale of Winter," "Uranus"), enjoying more of a familial relationship with her coworkers. She's touched when Philibert takes care of her, but finds Franck rude. After throwing his boombox out a window one night, she repents and buys him a new one and the peace offering works, enough so that Franck brings Camille along to a family pig roast and then to meet Paulette. Camille hatches a plan that she thinks will work for everyone, but her unwillingness to forge a real relationship with Franck keeps things unsettled. There are no surprises as to where any of this is going (will the skeletal waif end up with the chef?), but it's pleasant enough to go along for the ride. Stocker pops in frequently enough to give the illusion of something different and the gradual loss of his stutter through a combination of music therapy and the honing of an act lampooning his family gives the film nice subtext. All the actors are good here, even if they're playing familiar tunes.