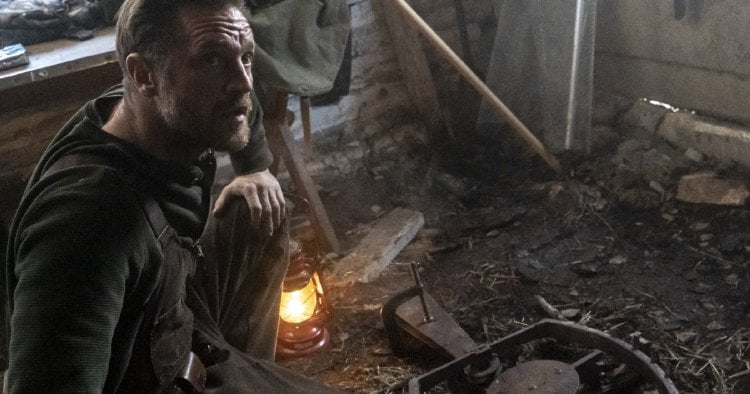 In a remote area of Canada, Anne (Camille Sullivan) worries that the world has passed the Mersault family by but her husband Joe (Devon Sawa) is determined to pass along the off-the-grid lifestyle of a fur trapper to their 13 year-old daughter Renee (Summer H. Howell) who’s been taking to it like a natural.  When their traps begin to be robbed at a time when pelt prices have dropped dramatically and living costs risen, Joe takes off to kill the wolf he believes has been bedeviling them, leaving his girls alone to confront the dark side of his kind in “Hunter Hunter.”

In lesser hands, this horror thriller could have turned out to be a rote piece of exploitation, but writer/director Shawn Linden’s ("The Good Lie") command of his material results in a smart and surprising shocker, a film that will haunt.  Linden isn’t satisfied by simply making a solid thriller, taking care to lace his screenplay with notes that reverberate, commenting upon his characters.  His ensemble is exceptionally well cast and capable, but this is Sullivan’s film and the actress brings it home with ferocity and trauma.

As Joe and Renee track spoor, Anne rides into town, but neither effort results in the expected yield.  Anne returns with much less food than she thought their pelts would buy and an ad for a modest home in town, an idea quickly rejected by Joe.  The next day he sets off with Renee to hunt the wolf, reminding her to never run and to keep her .22 at the ready.  But when he finds its latest leavings, a human hand, Joe sends her home.  Linden turns up the tension by following each of the three, Renee spooked and running, Anne returning to their shack with water doing the same as Joe howls out to his nemesis.

That wolf responds, but not where he’s expected, cornering Anne and Renee at the water’s edge the next day.  Anne responds with fierce maternal instinct, driving it away.  With Joe still having not returned, the women set out to find food, setting traps to snare the wolf.  Anne drives to the municipal police office to report the predator, but Barthes (Gabriel Daniels, "Goon") informs her there is nothing he can do and that the land she believes is owned by her husband is, in fact, federal.  Embarrassed, Anne asks for food.  Barthes’ partner Lucy (Lauren Cochrane) suggests Anne is in more trouble than she has admitted and that night Anne will find the wounded Lou (Nick Stahl) whose tale of a broken down car explains the one on the side of the road that’s been nagging at Barthes.

“Hunter Hunter” is a slow burn and Linden’s filmmaking choices reflect unusual care.  What at first seems like a simple tale of survival in the wilderness is layered upon, characters like Barthes, Lucy and Lou giving us more information about just what the Mersaults are facing.  There is no wasted action here – if Anne breaks down having to kill a rabbit or asks Renee to teach her how to skin a deer, those events will reflect with new relevance.  Be forewarned - the film builds to an unspeakable crescendo of violence and gore, the director choosing what to show and not with great skill.  In a year featuring many notable horror films, “Hunter Hunter” is one of its most unshakeable.

The Mersault family lives a pioneer existence on the fringe, trapping and trading and avoiding the outside world. When a rogue wolf returns to the area and raids all of their traps. Patriarch Joe (Devon Sawa) decides to go, alone, into the unforgiving cold to track and kill the marauder. But, a different kind of killer is lurking in the woods in “Hunter Hunter.”

What could have been a routine schlock horror movie in lesser hands is, with helmer Shawn Linden and his small but talented cast, a cut above the routine I usually see.

While Joe works the trap line with his apprentice-trapper-daughter Renee (Summer H. Howell), wife/mom Anne (Camille Sullivan) runs their rustic home – so rustic she must fetch water from a river to supply the household. Joe checks the line and finds a trap sprung but only a leg remains. His first thought is that the rogue wolf he thought had moved on is back. He decides to eliminate the predator and goes hunting.

What starts out as a man against beast story turns very dark when Joe makes a horrific discover during his hunt. This discovery completely changes the tone and direction of story as a fourth character comes into the picture. I will leave it at that as anything else said would definitely give the real tale away.

The trio playing the Mersault family are a combination of strong, resourceful characters who also have normal human flaws – like Joe’s stubborn male pride. Both aspects play out during the survival story and none of it goes the way I expected. This is a good thing in a horror movie and the reason “Hunter Hunter” is a cut above.