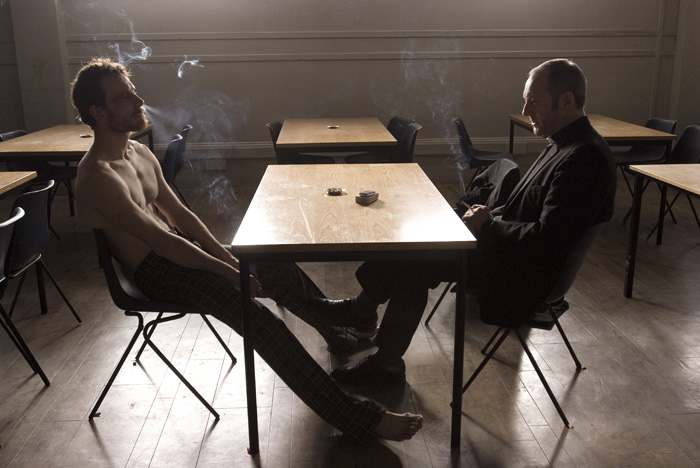 In 1981, IRA soldier Davey Gillen (Brian Milligan, "The Boxer") is incarcerated in Northern Ireland's Maze Prison and joins the protest against criminal garb already ongoing in H-Block. It is just six weeks before H-Block leader Bobby Sands (Michael Fassbender, "300," "Angel") will begin the final protest from which he will die of "Hunger."

Cowriter (with Enda Walsh)/director Steve McQueen is the 2008 Camera d'Or winner for a first feature film that makes its mark with strong visuals and very little dialogue. If 1996's "Some Mother's Son" told this same story for the average filmgoer, McQueen's film is for the more adventurous and patient cinephile. It takes some time to build its momentum and let the viewer get their bearings and is often very tough going, but it makes a powerful statement in a uniquely artistic retelling. The film begins with an overhead shot of a bathroom sink filled with water. Ray Lohan (Stuart Graham, "Goldfish Memory") lowers in his hands, knuckles bruised, and soaks them. He's served a perfect Irish breakfast in a cheery kitchen. He stand against a wall in the falling snow smoking a cigarette. Ray is a guard at Maze Prison and on the days the Republican prisoners are groomed and bathed, he must fight every single one to ensure the job is done. Gillen is paired with another blanketed prisoner, Gerry Campbell (Liam McMahon, "Snatch"), who has used their cell's walls to paint with food and excrement. Campbell, with a twelve year sentence, tells Davey he's lucky to only have six and begins to cue him in on such prison practices as clandestinely passing 'comms' (communication, from small notes to small radios). When the prisoners finally receive civilian clothes, they have been mocked with clownish colors and patterns and a riot takes place. In retaliation, the naked prisoners are forced down a gauntlet, beaten with billy clubs, body searched. The prisoners are avenged, in a shockingly brutal explosion of violence within an extremely vulnerable civilian institution. Clearly, McQueen intends to foster debate. At its midpoint, dialogue has consisted of the odd line hear and there, the rumblings of a crowd or the voice of Margaret Thatcher floating over the airwaves. This is when McQueen sets up his moral discussion between Bobby Sands and Father Moran (Liam Cunningham, "The Mummy: Tomb of the Dragon Emperor"). After some good-natured back and forth and many cigarettes, Sands announces his intention to begin a second hunger strike (an earlier one ended when the prisoners had the mistaken impression that their demands had been granted). The priest calls it willful suicide. Sands calls it murder and cannot be unconvinced. For the next sixty-six days Bobby Sands allows his body to die a torturous death. What is most extraordinary about McQueen's film is its ability to place us within the H-Block experience. We watch a guard sluice down a cell block corridor of the urine the prisoners routinely dump out from beneath their doors and we watch it in real time, sensing the determination and frustration on both sides perhaps giving way to the apathy of the everyday. There is no feeling of apathy, though, watching prisoners intent on not being washed being grabbed, shoved, their skin brushed raw or the government employees forced to do this job (Lohan, missing a prisoner, punches a wall, reminding us of that a.m. soak). There is no pleasure in watching excrement being evacuated to be used as paint, yet the painting greeting a Hazmat suited guard sent in to hose it down is art, an expression of the void. The deterioration of Sands's body during the two months he starves to death is more horrific than one could imagine and yet the filmmaker brings us to an almost meditative state with the quiet white environment in which it happens. The filmmaker does fall into some cliches. Birds taking flight from the treetops symbolize freedom and the departure of the soul, for example. And the central debate between Sands and his Republican priest is marred by a metaphor told as a childhood story that fails to serve Sands's present day argument. Still, the filmmaker has made a work of art sure to inspire discussion among any who see it and its subject still resonates today.