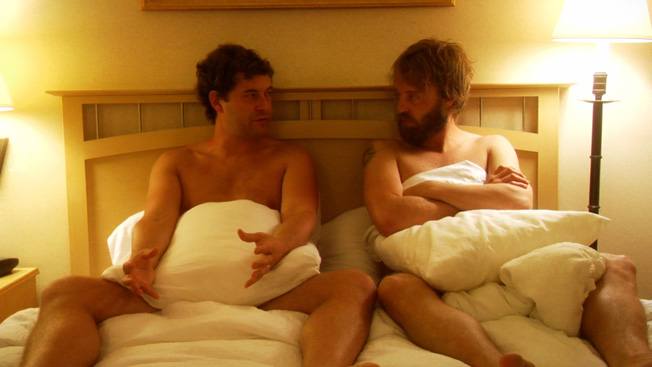 Ben (Mark Duplass, "The Puffy Chair") and Anna (Alycia Delmore) are relative newlyweds who have begun to try for their first child. One night, after they both admit exhaustion rules over libido, the doorbell rings at 2 a.m. It's Ben's long lost college buddy Andrew (Joshua Leonard, "Hatchet"), returned from a Mexican adventure. Before 24 hours even pass, Andrew has pulled Ben into Seattle's avant garde artists' circle and, with drunken abandon, they've announced they will enter a festival with a film depicting them, two heterosexual men, having sex. By the time Anna finds out, the next day is "Humpday."

"Humpday" plays as if director Lynn Shelton watched Kelly Reichardt's "Old Joy" and decided to turn it into a comedy. With the exception of the road movie element, it hits almost all of the same notes (settled down vs. rootless, impending pregnancy, drugs, physical intimacy between two men). The two stars of each even resemble each other, dark clean-shaven responsible Daniel London mirroring Duplass while the bearded, fair Will Oldham has morphed into Joshua Leonard. And while "Old Joy's" quiet contemplation gave weight to a friendship grown apart, "Humpday's" constant chatter eventually drives its one joke - sex between too heterosexual men used as daring coolness quotient - into the ground. Andrew's arrival is a bit weird, but so is Ben and Anna's hospitality. The new couple with the supposedly 'really nice' home puts him up in a sleeping bag in a basement storage room. Anna's a bit taken aback by everything, but the next day she suggests making her famous pork chops for the three of them to Ben, which he thinks is a wonderful idea. In the interim, though, Andrew, who claims to have returned from Mexico to obtain grant money for an art project he is involved in with locals there, has somehow claimed the interest of local artist Monica (Lynn Shelton), whose home becomes a hedonistic communal party every Friday night. Ben goes to bring Andrew back and is weirded out to discover Monica is bisexual after talking to her girlfriend Lily (Trina Willard), who is allowing Monica her 'boy time' as she cavorts with Andrew in the next room. Ben cannot extricate himself, and so calls Anna with a hedged invitation to come to Monica's house. When Anna predictably declines, Ben says he'll be home soon to enjoy her dinner as a twosome. Of course, Ben ends up drinking, smoking pot and becoming more comfortable with surroundings he hasn't experienced in years, if ever. Humpfest, an annual porn festival, comes up and so, somehow, does the idea that two heterosexual male friends having sex on camera would be 'art.' Ben agrees to appear with Andrew and Andrew is thrilled to be supported by the local artistic community. The next day, Ben awakens to find himself being straddled by Anna, who is using sex in an aggressively male fashion to note her displeasure that Ben came home drunk at 3 a.m. rather than for the dinner and baby making they'd talked about. To cure his hangover, Ben has an overtly competitive hoops shooting session with Andrew before the two warily approach the subject of the evening before. Andrew pushes Ben's buttons, referring to 'In the paradigm that you live in...' ostensibly to put him in a conservative box, but Ben calls the bluff and the two agree the exercise is not about backing down. They will go through with it, using the hotel reservation for the following evening that Ben made in the passion of the moment the night before. It's interesting that in a film about a male relationship, the most interesting character turns out to be Anna. Alycia Delmore gives a tentative yet open performance that lets us really see where Anna is coming from. She wants to be 'one of the boys' as well, but not at the expense of a lifelong commitment. Duplass gives a genial and entertaining performance (don't get me wrong, the film can certainly be amusing) although Leonard never makes Andrew the charismatic Pied Piper he's supposed to be. The film's claustrophobic quarters mesh more with the film's budget than Ben and Anna's supposed economic status and Shelton brings no spatial logic. When Anna invites Andrew to join her in a drink in order to get to know him better, the two go through an entire bottle of Scotch in Ben and Anna's kitchen. Presumably it takes a while for two people, even partiers, to consume an entire bottle of Scotch, but Ben pops in, as if he's been home all along, just when it's about empty, a conveniently pivotal moment. It's impossible to imagine he could have remained in another part of this 'house' for so long unaware of his wife and friend's presence. Shelton does add two really character defining scenes that flip her audience's expectations. Andrew goes to join Monica and Lily for a wild evening, but backs out when he's told a sex toy will be taking his place with Monica. We can see where the root of his fear lies here, and he doesn't tell either Ben or Anna what happened. Later, Ben tells Andrew a story about a video clerk that shows he may have been the more open-minded of the two all along. In the end, though, "Humpday" builds up to its big climax only to go limp with a bunch of easy to predict blather. It's abrupt ending plays like a filmmaker who has run out of idea.