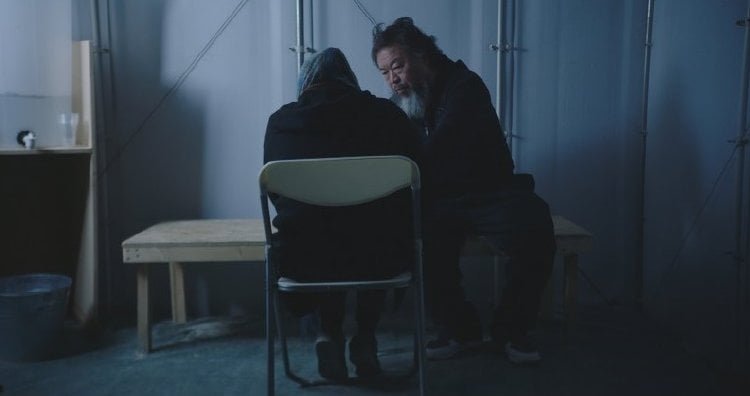 70 years ago, after WWII, the world witnessed the greatest migration of displaced people ever - until now. There are currently over 65 million refugees around the globe and that number will increase with climate change, drought, famine and war. World renowned artist Ai Weiwei leads a team of documentarians who journeyed to 23 countries to chronicle the 21st Century “Human Flow.”

Five years ago, many first learned of Chinese artist and political activist Ai Weiwei in Alison Klayman's documentary "Ai Weiwei: Never Sorry." Now the man has made the definitive documentary on our current refuge crisis, "Human Flow." With tremendous compassion, Weiwei and his crew travel to 23 countries where the man becomes a refugee himself (he is, in fact, having left China for Berlin). When refugees heads are shaved, the artist joins them. He offers to trade passports with another. By film's end, he's dressed in the dehumanizing, institutional clothing many are given to wear. Weiwei humanizes the collective suffering we see on TV, as well as the suffering frequently overlooked by the media. But Weiwei doesn't leave his art behind, the occasional drone shot capturing the human flow in the same style as many of his art installations where hundreds, sometimes thousands of objects create patterns on museum floors. As his film draws to a conclusion, we realize that these patterns are beginning to bulge, as more and more people are blocked from escaping war, political oppression and disastrous climate change. 'We have to learn to live together,' Weiwei tells us. Hopefully someone's listening. Grade:

Anyone who has paid attention to the real news for, oh say, the last 30 years may have noticed that the current and burgeoning refugee crisis is not something new. Ever increasing civil wars, ethnic cleansing, famine and accelerating climate change are simply making the crisis more severe. The problem is, the global crisis is something that we are in danger of becoming so used to that we stop “seeing” it. The makers of “Human Flow” will not allow that to happen. Ai Weiwei helms the enormous effort to bring to light not just the streams of refugees that we are used to seeing – the migration of hundreds of thousands risking their lives in overcrowded boats across the Mediterranean Sea to seek asylum in the EU through, mainly, Greece and Italy or stranded in refugee camps in Turkey. But, the many crews involved in making “Human Flow” take it, quite literally, global. The litany of the different places, worldwide, where there is a refugee crisis brings to light the life-threatening mass migrations. – Bangladesh and the Royingha people fleeing from Myanmar ethnic cleansing (500000); the closed Macedonian border where refugees flee to northern Greece only to wait, for years, to cross (13000); Syrians fleeing to Lebanon (553000); Palestine (4.7 million); Sub-Sahara Africa (26% of the world’s refugee population) and many more migration hot spots are given the attention deserved. The list of disturbing statistics, such as the population of Africa will double, to 250 million, by 2050 – a continent suffering the worse results of climate change – are seeded throughout “Human Flow” and punctuate the real time crisis. It is a moving and thought provoking document about a global catastrophe the will only grow unless something is done. Whatever happens, “the mothers will cry.”