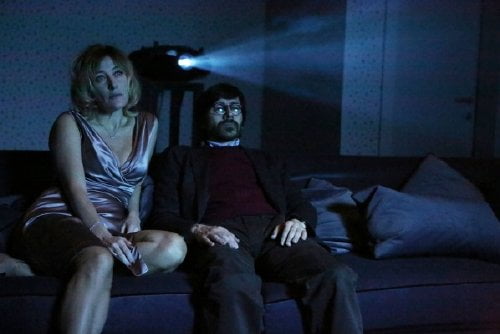 After cleaning up the elaborate New Year's Eve party he's just worked, waiter Fabrizio is biking his way home when he's struck in a hit and run, left dying in a ditch. Going back a week earlier, we'll witness how the intersection of the struggling Ossola family and the wealthy Bernaschis left Fabrizio's widow with just his meager "Human Capital."

Although the movie closes with title cards explaining what happened to all the characters as if it were based on a true story, the film is adapted from a Connecticut set novel by Stephen Amidon by cowriter (with his "The First Beautiful Thing" writers Francescos Bruni and Piccolo)/director Paolo Virzì. Sliced into four chapters of varying lengths, Virzì keeps adding new shadings to his tale by featuring the point of view of three main characters before his final chapter ties all the sad strings together. Chapter One features Dino Ossola (Fabrizio Bentivoglio), a realtor sharing a small apartment with his second wife Roberta (Valeria Golino, "Hot Shots!," "Respiro") and his teenaged daughter Serena (Matilde Gioli). Serena happens to be dating the richest boy in town, hedge fund manager Giovanni Bernaschi's (Fabrizio Gifuni, "Hannibal") son Massimiliano (Guglielmo Pinelli), and when Dino drops her off one day he can't resist looking around the lush surroundings. The opportunist is invited to make up a tennis double and eagerly accepts, all but salivating at the idea of being invited into Bernaschi's fund, which has been averaging 40% returns. After he's engineered that, he begins lying through his teeth, signing a document stating that he's venturing no more than 20% of his worth after borrowing 500K to invest. It's easy to see where this is headed and Dino's kowtowing is the external display of a deep, moral rot. We're led back to that opening party, the two families uneasily together for the sake of their kids, but Serena's come late and when a medical emergency divides the Ossolas, she fails to return as promised with Roberta's car. Da-da-dum. Chapter Two brings us right back to Dino's arrival at the Bernaschis, but this time we're following Giovanni's wife Carla (Valeria Bruni Tedeschi, "Munich"), a genuinely kind if desperate housewife. Bruni Tedeschi is the clear first among equals here, giving a sad, layered performance as an envied woman with a hollow life, outwardly exhibited as nervous distraction. When she stumbles across a historic theater on the verge of demolition, she grabs the opportunity for a meaningful diversion. With her husband's backing, the theater can be restored, preserving an artistic artifact. But business being business, the same downturn which hangs over Dino will turn Carla's good intentions into the worst of all evils. When her son comes under suspicion for that opening hit and run, Carla, his champion, becomes even more of an outcast. (It must be noted that in Virzì's hands, Carla is like an innocent version of Carmela Soprano, right down to a potentially adulterous private video viewing.) Chapter Three brings us to Serena at that same opening point and we get quite a reversal on previous assumptions. Her chapter features the least repetition and brings one of Roberta's psychiatric patients, Luca Ambrosini (Giovanni Anzaldo), a good kid in bad circumstances, into prominence, as well as giving Massimiliano a voice (perhaps that of a Thomas Gilbert, the NYC hedge manager's son who shot his dad over an allowance cut). Virzì clearly intends the resolution of his thriller as shocking socioeconomic commentary, but his tendency towards soapy drama and the ambiguous state the Ossola family is left in make for far less impact than his simple statement on Italian wrongful death compensation. Still, his twisty melodrama certainly makes the well known point that money is the great unequalizer. Grade: