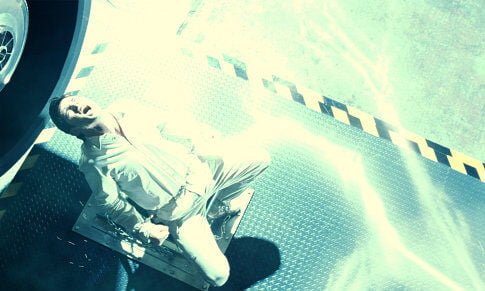 In the early 60's, comics superhero creator Stan Lee came up with combining the classic Frankenstein monster with the divided personalities of "Dr. Jekyl and Mr. Hyde." The result was "The Incredible Hulk" which, in the 70's became the popular TV series starring Bill Bixby and Lou Ferrigno as the title character. Now, director Ang Lee utilizes state of the art computer graphics to fully embrace the other Lee's and bring the sizable green guy to the big screen in "Hulk."

Bruce Banner (Eric Bana, "Black Hawk Down") believes his parents are dead and is haunted by a grim nightmare. He works in a high security lab with his ex-girlfriend Betty (Jennifer Connelly, "A Beautiful Mind") searching to crack the secret of biological regeneration. When another of Betty's former suitors, Talbot (Josh Lucas, "Sweet Home Alabama"), informs Bruce of his intent to use their research to create high-tech soldiers, Bruce gets mad, unleashing his inner "Hulk."

Director Ang Lee, who began his career with a trilogy of films about fathers ("Pushing Hands," "The Wedding Banquet," "Eat Drink Man Woman"), then moved on to a Jane Austen adaptation ("Sense and Sensibility"), the Civil War ("Ride With the Devil") and back to his native China for the martial arts extravaganza "Crouching Tiger, Hidden Dragon," returns to a story of father and son, albeit one wrapped around a Stan Lee superhero. Not since Tim Burton resuscitated the genre with "Batman" has a director so managed to put his own stamp on a superhero film and make the old seem new again.

After establishing Bruce in the present, we flashback to his past. Father David (Paul Kersey filling in for the later Nick Nolte) was trying to unravel the same biochemical mystery as his son on a desert military base run by General Ross (Todd Tessen, replaced later with Sam Elliott), who forbade him a human subject. Like all mad scientists before him, Banner uses himself as a test case and is alarmed to see mutation in his blood cells. When his beloved wife (Cara Buono, "Chutney Popcorn") tells him she's pregnant, he's both horrified and curious. Baby Banner occasionally shows greenish, splotchy veining when upset, but dad goes berserk when his secret is discovered, leaving his son with that disturbing nightmare.

Thirty years later, he's freed from lockup and poses as a janitor to make contact with his son in his place of work. Banner Sr. threatens Betty, whose dad happens to be General Ross, with his three mutant dogs. Talbot works to unleash Bruce's inner beast for profit and Ross is left to try and contain the resultant disaster while dealing with his own precarious father/daughter relationship.

The screenplay by John Turman, Michael France ("Cliffhanger") and producer James Schamus ("Crouching Tiger, Hidden Dragon") initially casts Bruce's inner turmoil as an emotional handicap that explains his broken romance. When his father reappears and Bruce must address his nightmares, only the beauty can tame the beast and the filmmakers give Connelly her own "King Kong" moment. The film's first climax, where the Hulk is chased from the desert to the city, recalls "The Iron Giant" while its second is more like "The Sorcerer's Apprentice." The film's biggest failing is in this second standoff, too mythically imagined. Another problem lies with Betty's attempts to unravel Bruce's past while she knows all along that her father has the answers.

Bana is well suited to the role, bringing a studious but strong quality to the character. Nolte, looking like his drunk driving mug shot throughout, has a field day playing a megalomaniac. Sam Elliott and Jennifer Connelly are well cast as father and daughter (nice eyebrow matching!). Lucas goes for a black and white villain, evil through and through.

Technically, the film is astounding, from the amazingly natural incorporation of the CGI created Hulk to the stunt work and sound effects. One 'how did they do that?' scene shows the Hulk sliding down an immense dune, landing in a spray of sand. Cinematographer Frederick Elmes ("Ride With the Devil") uses bright whites and deep shadow to illuminate character mood with splashes of green innovatively incorporated (Betty's scarf, a toy dinosaur). The comic book world is evoked with overlays, splits, wipes and panels while the real San Francisco provides a striking backdrop for the film's climax. Danny Elfman's score has an exotic edge.

Be warned - "Hulk" is very violent and more sensitive and younger children may be disturbed by it. Still, the best superheroes have the darkest conflicts. It ain't easy being green.

Eclectic helmer Ang Lee has shown a versatility and talent that makes me think that there is nothing that this man can't do behind the camera. His early family-oriented Taiwan films like "The Wedding Banquet" and "Eat Drink Man Woman" were followed by his adaptation of Jane Austen's "Sense and Sensibility," family angst in "The Ice Storm," Civil War drama in "Ride with the Devil," martial arts/fantasy in"Crouching Tiger, Hidden Dragon" and, now, he enters the stratified realm of the comic book super hero with Stan Lee's "The Incredible Hulk."

It has been a long, long time - decades at least - since I had any exposure to "The Incredible Hulk" comic book tales so it is hard for me to judge the accuracy of the film to the source material. But director Lee, working with the story by his longtime collaborator James Schamus, builds a fair fantasy yarn that is in keeping with the famous Marvel comic character.

There is a Beauty and the Beast aspect to "Hulk" that adds to the combination of Frankenstein meets Dr. Jekyl and Mr. Hyde as developed by creator Stan Lee. Fine casting helps to elevate things up a level from mere comic book, a la "Daredevil." Eric Bana is suitably sullen and troubled as Bruce Krensler, nee Banner, as he has lived this many years with a demon inside. This demon, the giant green guy of the title, comes into being when an accident occurs in Banner's lab and he is exposed to a massive dose of gamma rays. All it takes is a little unbridled bout with anger and the star of the film is born.

Supporting cast, and everyone except for the star himself is support, is better than it has a right to be in a comic book adaptation. Oscar winner Jennifer Connelly is properly pretty and concerned as Banner's former love interest and now true friend. Sam Elliott, always a gruff, gravelly-voiced favorite, puts a humanistic spin on his General Ross, quite an accomplishment since this kind of character rarely rises above the two-dimension. Nick Nolte looks as if her was just released from a Florida jail as the scraggly haired David Banner, Bruce's long estranged father.

Helmer Ang Lee, no newcomer to big budget drama, plays it mostly straight without leavening much humor into the proceeds, using action, instead, as the draw for the built-in audience of Hulk fans. The comic book style of split frames gives credence to the story's source material and keeps things tight and fast paced, too, a plus for a 137 minute long film.

Of course, the real reason we are all here to see "Hulk" is to see the Hulk. Industrial Light and Magic took on the task of bringing the comic creature to life and, overall, do an impressive job. Director Lee, once again, broke new ground as he participated, from the start, in the creation of the CGI animated green guy, to the degree of providing the computer reference points that bring the Hulk to life. The filmmakers keep things basic as far as the title character is concerned, using Hulk to do battle against mutant dogs (to save the damsel in distress in true hero form) and take on a squadron of Abram tanks, then a bunch of Apache attack helicopters. I have to admit, I found myself unconsciously clutching my fists during these high-powered action sequences.

Danny Elfman's score, at first, is obtrusive and overbearing but when the military side of things kicks in the music takes on a Middle Eastern flavor that works surprisingly well for the rest of "Hulk." Fred Elmes's photography is in keeping with the action as the green machine leaps bounds across the desert landscape as he dodges missiles and eats machine gun bullets for breakfast. Subtle uses of green-hued lighting and makeup for Bruce Banner give the sense of the underlying demon without wasting the Hulk's onscreen time kicking butt.

There are problems with the script by John Turman, Michael France and James Schamus that leaves things up in the air, such as the details of how Bruce Banner becomes an orphan. The climactic battle of the titans ending - I won't give away the nuts and bolts of the finale in deference to the fans - has a tacked on feel when compared to the rest of the tightly honed story and action. There is a throwback feel to the Cold War as science versus militarism in "Hulk." To Banner, the ability to regenerate life is a thing that should be available to all mankind. But, the rep of the military-industrial complex, Glen Talbot (Josh Lucas), sees it only as a means of keeping soldiers alive so they can continue to fight wars.

"Hulk" moves along so briskly that the film, like its hero, almost flies. The effects of the Hulk are beyond reproach (though the fans may say different) and the action sequences are downright exciting. "Hulk" is going to be big (pun intended) and I like it better than "Spiderman."