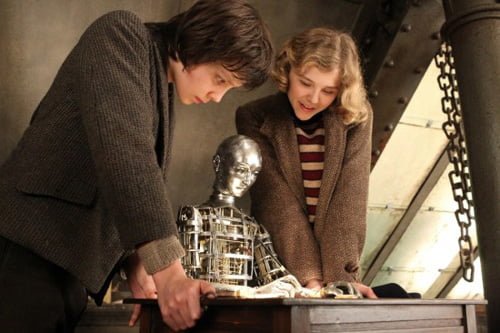 When his father (Jude Law) dies, a twelve year-old boy (Asa Butterfield, "The Boy in the Striped Pajamas") hides within the bowels of a Parisian train station with the one thing he has left - an automated man his dad hoped to restore for which he has no key. He finds it by strange coincidence when he meets Isabelle (Chloë Grace Moretz, "Kick-Ass"), a young girl who makes it her mission to help "Hugo."

Brian Selznick's 2007 'The Invention of Hugo Cabret' would seem tailor made for director Martin Scorsese, whose film scholarship and restoration efforts have arguably been as important as his movies. This gives Scorsese the opportunity to work in 3D for the first time and with a children's story for the first time while also paying homage to the beginnings of cinema and French magician/filmmaker Georges Méliès in particular. But the resulting film, which does have moments of striking beauty and classicism, is often plodding, the plot unfolding as if through a sea of molasses. The only real audience for this is film critics, scholars and buffs. Of the two filmmakers known for living and breathing New York City who visited Paris this year, Woody Allen took himself less seriously and fared far better. Hugo is taken from his father's clock shop by his uncle Claude (Ray Winstone) to be apprenticed in keeping the clocks at the station wound. But Claude is a drunk and Hugo already knows more about clocks than Claude ever will. When he's not zipping up and down the clock tower (where some of the 3D effects are the most impressive), Hugo is evading the Station Inspector (Sacha Baron Cohen) and his Doberman Maximillian while pilfering food, but he's caught by the man who runs the toy shop booth (Ben Kingsley) which Hugo has been raiding for clockwork parts. 'Papa George,' as Isabelle calls him, takes Hugo's notebook in which his father had broken down the workings of the mechanical man, and tells Hugo he must earn it back by fixing things at the shop. Isabelle promises to keep her Godfather from burning the book and also introduces Hugo to Monsieur Labisse (Christopher Lee), the bookshop owner where they will eventually find the book by Rene Tabard (Michael Stuhlbarg, "A Serious Man," HBO's 'Boardwalk Empire') that connects the dots. Most audiences will be far ahead of Scorsese and John Logan's ("The Aviator," "Rango") adaptation, however, making it a chore to wait for Hugo and Isabelle to figure everything out and for Papa George to quit evading them. What's rewarding in "Hugo" instead are the details - snow falling in 3D, the parallel between the automaton and the Inspector's faulty leg brace and the three generations of romance (the Inspector crushes on flower seller Lisette (Emily Mortimer, "Shutter Island") while Cafe owner Madame Emilie's (Frances de la Tour, "The History Boys") dachshund Schatzi wards off the attentions of Monsieur Frick (Richard Griffiths, "The History Boys")) - and even more importantly, its paean to silent cinema, the stuff of dreams where the very first film, "L'arrive D'un Train a la Ciotat," inspires a nightmare, Harold Lloyd haunts an escape sequence and an old master's lost works are found. It's a bit bizarre watching such an illustrious cast with relatively little to do, but they make the most of their odd bits of screen time, most notably (and with heartbreaking wistful humanity) Helen McCrory ("Harry Potter's" Narcissa Malfoy) as Papa's wife Mama Jeanne. Asa Butterfield has the big eyes of an urchin and Moretz is period plucky, but neither are really all that interesting. Baron Cohen's got a stock villain role (and the multiple scenes of him chasing Butterfield through the crowded station provide a sort of 3D whiplash), but he blooms wooing Lisette with his three levels of 'dazzling smile.' The production, which recreates Paris of the 1930's and features lots of moving mechanics, is beautiful, the recreation of Méliès' glass studio enchanting, but never once did I feel that 'cinema rush' which accompanies the viewing of a masterpiece. I'd rather listen to Scorsese analyze these films than try to recreate them.