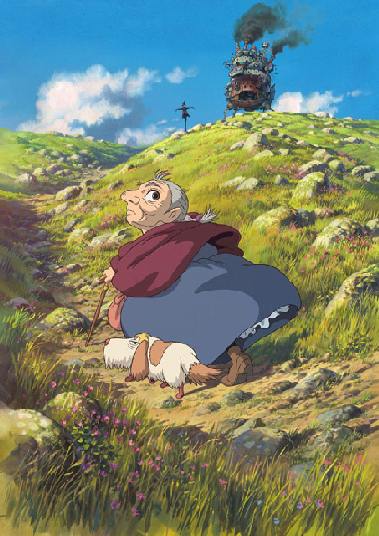 In a fantastical world of Middle Ages architecture, steam powered vehicles and war time WWI style military displays, Sophie (Emily Mortimer, "Dear Frankie") drudges away decorating hats in her family's millinery. One night after closing, Sophie is visited by the rude Witch of the Waste (Lauren Bacall), who shows her displeasure by putting a spell on the young girl that turns her into a ninety year old woman (voice of the Old Sophie by Jean Simmons, "The Robe,""How to Make an American Quilt"). Sophie sets out to find the Witch and encounters a helpful, silent scarecrow, who gives her a walking cane, then leads her to shelter in "Howl's Moving Castle."

Writer (from the Diana Wynne Jones novel)/director Hayao Miyazaki ("Spirited Away") once again takes inspiration from multiple sources ("The Wizard of Oz" having two references in that opening paragraph alone) and concocts a thoroughly Miyazakian film. "Howl's Moving Castle" is about how a young girl blossoms as an old woman while dealing with enchanted beings, a vain but noble wizard, the women who love him, and a distinctly messy household. The film is being released in both dubbed (the version I caught, adapted by Pixar director Pete Docter of "Monsters, Inc." fame) and subtitled versions and damn if Billy Crystal doesn't make a fine fire demon (and resists the urge to ad-lib 'storming the castle' lines). Docter's English vocal cast make "Howl" possibly Miyazaki's funniest outing without diluting any of Miyazaki's artistry. Sophie tells Howl's young assistant Markl (Josh Hutcherson, "Kicking & Screaming") and the bellyaching fire demon Calcifer (Billy Crystal) that she was hired by Howl as a cleaning lady and begins to give the all male enclave a woman's touch. When Howl (Christian Bale, "Batman Begins") returns, he is amused that Sophie has managed to tame Calcifer into cooking breakfast and she does not tell him she is the young girl he spirited over a rooftop the day before (the obese, old Witch of the Waste's jealousy over this news is the likely reason for Sophie's spell). Howl is an odd hero - a noble renegade who is trying to stop the purposeless war started by his mentor Madam Suliman (Blythe Danner, "Meet the Fockers"), who also covets the young handsome wizard, and a vain playboy who despairs when Sophie rearranges his hair dye and he gets unexpected results ('there's no use living if I can't be beautiful,' he despairs in a nod to Pantene shampoo). Howl's castle, which looks like a man's face or a wide-mouthed bass festooned with balconies and turrets on four, spindly mechanical legs (an invention Gilliam might have created in the Python years) has a door which opens to different locations depending on the color it is dialed to, but only Howl can go out on black, where he turns into a huge, black bird and goes up against the kingdoms' war machines (we are told that the wizards who turn into monsters will never turn back after the war). When Howl is summoned by the king, he sends Sophie in his place then arrives in disguise to whisk her away and Suliman deduces that he is in love. It will be up to the quick witted Sophie, with the assistance of Calcifer (the fire demon with the most spark!), the ever loyal Turnip Head, Markl and Suliman's wheezy old dog to save Howl from Suliman's fire bombing floating ships. The art direction of this alpine outing is simply breathtaking, a highlight being Howl's bedroom which is inspired by the eyes of peacock feathers. The traditional animation, such a pleasure to watch in such able hands, is so deft that an endearing character is made out of a turnip head on a pole and a little fire comes alive with a pair of simple eyes and a propensity to gobble a share of what he cooks. Markl turns himself into an old man with a flick of his hood - which includes a built-in beard. Miyazaki's inky menace this time takes form as the Witch's bubbling blob men who move like the innards of a lava lamp shaped by their livery. And is it only me who thinks our first glimpse of Suliman looks uncannily like a Catholic pope or cardinal? The vocal talents are wonderful. Simmons gives old Sophie a youthful quality while Mortimer gives the younger one a serious gravity. Bale gives Howl a lusty, throaty voice. Bacall's early, dark imperiousness gradually turns to the quieter hum of a much older woman. Crystal is reined just enough to make Calcifer a lively being without giving over to schtick and young Hutcherson does a cute old man imitation when he's not just being himself (listen to his infectiously funny fervor when he worries about Howl's sulking). "Howl's Moving Castle" is a phantasmagoric delight, a great example of the heights that can be achieved with an animation style fewer and fewer are favoring.

Sophie (voice of Emily Mortimer) is an ordinary girl working a mundane job in her mother’s hat shop. That changes, one day, when she is swept off her feet by a wizard named Howl (voice of Christian Bale) and the shop is visited by the wicked Witch of the Waste (voice of Lauren Bacall) who casts a spell on the teen, changing her into an aged crone. The now 90-year old Sophie (voice of Jean Simmons) must find help to break the curse and hitches a ride on “Howl’s Moving Castle.” Hayao Miyazaki has become one of the preeminent kings of anime in the world today. He got to me in a good way with his wonderful kids’ animations, “My Neighbor Totoro (1988)” and Kiki’s Delivery Service (1989).” He became an international phenomenon with his fantasy epic, “Princess Mononoke (1997)” and, in 2001, solidified that position and won an Oscar with Spirited Away.” The latter film had a look that seemed inspired by Lewis Carroll and Alice’s Adventures in Wonderland. “Howl’s Moving Castle,” I think, gets its inspiration from the works of H.G. Wells (with a bit of Jules Verne thrown in). Howl’s Moving Castle” is a complex tale that borrows from other sources, such as “The Wizard of Oz” and Beauty and the Beast,” to tell its story of understanding, trust, resourcefulness and love. The English-language adaptation, by Cindy Davis Hewitt and Donald H. Hewitt, of Miyazaki’s own adaptation of the Diana Wynne Jones novel, is led by Pixar vet Pete Docter and Disney Character Voices chief Rick Dempsey to translate the original Japanese work for broader international appeal. Sophie is a shy young lady who sees herself as just a plain Jane. When the vengeful Witch of the Waste transforms the teen into an old woman, Sophie leaves the haven of the hat shop to seek the help of wizard Howl. On the way, she gives a fallen scarecrow that she dubs Turniphead a hand and, to her surprise, the stickman guides her to the sanctuary of Howl’s mobile home. Once ensconced in the castle she meets a fiery little demon named Calcifer (voice of Billy Crystal) who is also cursed and must serve Howl by powering the moving abode from its hearth. Sophie and Calcifer form a pact to help each other break their respective curses. But, the story of witches, wizards and magical spells is complicated by the political events in this fantasy Victorian world on the brink of total war. Besides Sophie’s very personal story is the broader power struggle of nations mobilizing for war, except in this fantasy world even witches and wizards are conscripted by their kings. This is where Miyazaki combines Sophie’s metaphysical journey to end the witch’s curse with the quasi-historical War to End All Wars. That the story focuses on the plight of an old lady (voiced with youthful spirit by Jean Simmons) should be commended. In our youth-oriented world, having an octogenarian as the central character is a daring thing, indeed. And, it works! The animation industry, especially in the US, is becoming more and more dominated by name personalities doing the voices. For example, off the top of your head, who did the vocal leads for Disney’s “Beauty and the Beast”? Who did the voices for the main characters in “Shrek”? I’ll bet nearly everyone knows the answer to the latter question and very few knew the former. (It was Paige O’Hara and Robby Benson, by the way.) Surprisingly, Disney cast the voices for ”Howl” in atypical fashion. Of the main characters, the only voice that is recognizable from a “name” standpoint is Billy Crystal as fiery little Calcifer. The rest of the vocal characters – Emily Mortimer as young Sophie, Simmons as her elder self, Lauren Bacall as the Witch of the Waste and Blythe Danner as the king’s chief sorceress and power behind the throne, Madame Suliman – all blend with their animated personas seamlessly. Josh Hutcherson also does a fine job voicing Howl’s youthful assistant and master of disguise, Markl. Christian Bale, as Howl, is the only one who fails to put any personality into his vocal caricature. Technically, Miyazaki and company has scaled new heights in computer-generated animation. The art direction and visualization of a sci-fi fantasy Victorian world on the brink of war is on a par with some of the finest live action productions. This is where the Wells/Verne visions of the future past are given stunning shrift with massive terror bombings of cities, fantastical flying war machines and, of course, Howl’s Moving Castle, which has to be the Rube Goldberg machine to end all. The combination of organic, manufactured and magical help create yet another unique world by anime master Miyazaki. Howl’s Moving Castle” is an intellectual anime and, as such, is not geared for the younger crowd. There is too much “story” and detail for smaller kids and the runtime precludes any chance to hold their interest, anyway. This is a film meant for more mature youngsters, teens and adults – when the DVD comes out it should say on the package “for ages 8 and up” – and is best viewed on the big screen. It may even draw in the seniors crowd with its smart and able older Sophie. Some of the plot lines get a bit confusing as the film flows and I was glad when it finally began to wind down (unlike, for example, the previously mentioned “Beauty and the Beast,” which I just wanted to keep on going). But, it is a visually stunning work and will be remembered as one of the best animation films of the year.