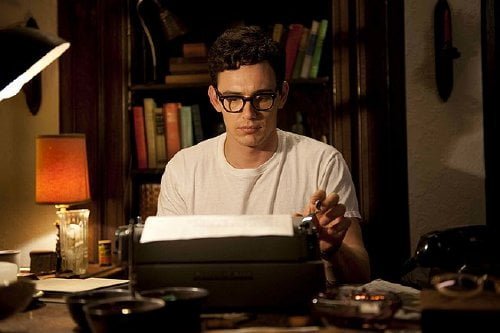 Cowriter/directors Rob Epstein ("The Times of Harvey Milk," "The Celluloid Closet") and Jeffrey Friedman ("The Celluloid Closet") illuminate a work of art by coming at both it and its author in a myriad of ways that illustrates the genesis of the poem. They begin with Ginsberg being interviewed, talking about his life and his work, before jumping to the courtroom where defense attorney Jake Ehrlich ("Mad Men's" Jon Hamm) takes on prosecutor Ralph McIntosh (David Strathairn, "Good Night, and Good Luck," HBO's "Temple Grandin") and his string of literary 'experts' (Mary-Louise Parker, Jeff Daniels, Luther Nichols, Treat Williams). Franco also recites the poem in a smoky room attended by an appreciative audience and the filmmakers leap from his performance to a compelling animated interpretation by The Monk Studios. Finally, there are b&w flashbacks of Ginsberg's life sprinkled throughout his interview which fill in his experience with mental institutions (he had to sign for his mother's lobotomy, then was admitted himself and met a man he addresses throughout "Howl"), his homosexuality and his place amidst the Beat Generation, all of which contribute to the meaning behind the poem. "Howl" isn't likely to stand out amidst the onslaught of fall films, but it is unique and an entertaining way to learn about an artistic movement and artist through one important work (the filmmakers had originally set out to make a documentary). The ever interesting James Franco is extraordinary as Ginsberg and his performance of the poem brings it to twitchy, humorous and agonized life. Production Design by Thérèse DePrez mixes multiple formats into a cohesive whole and art direction by Russell Barnes and Eric Drooker is very thoughtful given their limited resources (check out how the pattern on Ginsberg's shirt so artfully coordinates with the period wallpaper in the background). Carter Burwell ("No Country for Old Men," "A Serious Man") delivers yet another extraordinary score which perfectly complements the mood and tone of the film. B+ Robin: Robin gives "Howl" a