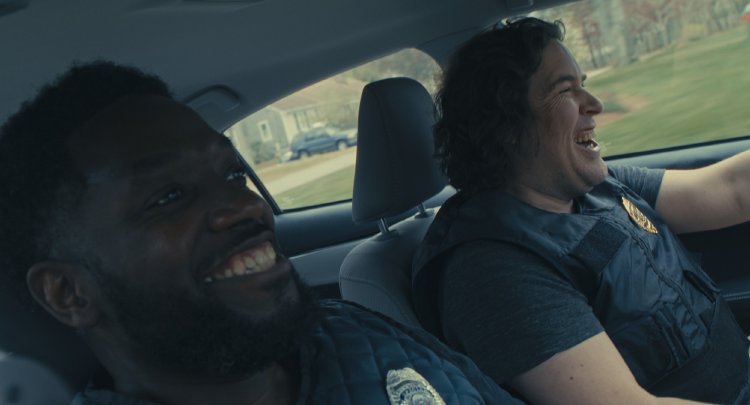 When a young black boy comes barreling out of suburban bushes from a wooded path, a pudgy white kid with a baseball bat asks him what he’s done and when it is clear he is only being terrorized for who he is offers to fight alongside him.  Sean Price (Chinaza Uche, Apple TV's 'Dickinson') remains forever indebted to Jimmy Winters (Joshua Koopman), although Sean’s more interested in legitimizing their landscape business than continuing with the stick-up jobs Jimmy runs for Judge (Kevin Nagle).  But when Jimmy steps outside of Judge’s lines, the duo must outwit the mob in “How to Rob.”

Writer/director Peter Horgan makes his feature directorial debut with a well shot and acted Boston crime drama that leans on the “Mean Streets” level vs. hot head street punk dynamic.  From the first play the two make, impersonating cops (badly) to steal drugs from a local hustler, we can see Sean tugging on Jimmy’s reins, the more responsible adult trying to cap the madness.  It is to Horgan and his actor/producer partners Uche and Koopman’s credit that both characters appear ten years older by the time their adventure ends days later.

Jimmy’s quite happy stopping in at Judge’s Longfellow’s Pub in Quincy to get assignments and be harassed for his $1,500+ bar tab by Judge’s wife Frankie (Vera Teixeira).  With Judge offering $30K to hold up a local with an impressive and varied gun stash, Jimmy also wants to incorporate neighborhood kid Corky (Jacob Popoloski), who recently helped him bag an addict attempting to burgle his bedroom, into the job.  Sean has other ideas, wanting to invest the money in a landscaping truck and adamant that Corky should steer clear, an unnecessary and innocent wild card.  Sean is given another option by his girlfriend Tina (Caitlin Zoz, a grounding influence), who thinks his ‘business partner’ is usually drunk or absent and wants him to move with her to Chicago where she’s taking over the books for a family business.  But before Sean and Jimmy pull Judge’s latest job, Judge is leaned on by the North End’s Anthony (Anthony Firicano) and Dennis (Damien Di Paola, "Chappaquiddick") to take out the ‘black and white stickup team’ who’ve overstepped their boundaries, a situation Jimmy reads when Judge becomes unreachable.

While there are a few extraneous bits (the sudden one and only appearance of Jimmy’s parole office at a critical moment and a couple of flaccid trips to a fortune teller), Horgan keeps multiple threads twisting as he continually closes his noose.  The film’s ensemble is impressive, Uche immediately engendering a rooting interest with his intelligent and compassionate performance while Koopman has to earn one – and does – his rash and selfish behavior evolving as events demand.  Everyone here feels ripped from the streets of Quincy, Firicano and Di Paola adding a somewhat humorously exotic menace.  The small independent film looks slick without being showy and boasts professional sound and a subtle, effective score.

“How to Rob’s” biggest drawback may be its title, but while it travels familiar ground, it does so with confidence and an occasional jolt of the unexpected.  This gritty little indie deserves a look and word of mouth could lead to a cult following.

Sean (Chinaza Uche) and Jimmy (Joshua Koopman) have made a decent living from robbing other criminals. They take a bridge too far, though, and rob the mob. Now, they find out two mafia hit men on their trail in “How to Rob.”

Sometimes, but not all that often in the scheme of things, a first-time director emerges as a fully formed filmmaker. John Singleton’s 1991 debut, “Boyz in the Hood,” came to mind. Here, with “How to Rob,” first-time writer-director Peter Horgan, working with a miniscule budget, creates a fascinating combo of crime drama and the story of two buddies for life.

The boys have been robbing the robbers for a long time and, thus far, they have gotten away with it. Then, two things happen: Sean’s longtime girlfriend, Tina (Caitlin Zoz), is fed up living in Quincy and is moving to Chicago and a new life, and the guys robbed the mob. The former is compelling Sean to follow his heart and the latter tells them that their criminal gravy train is going off the rails.

Chinaza Uche and Joshua Koopman have great chemistry and they really convey that they are, indeed, BFFs and, as Jimmy told Sean when they were just kids, “I always have your back.” The sense of friendship between the two is palpable and genuine and you know that do have each other’s back.

They other remarkable thing about tyro helmer Horgan is his ability to take a small budget, cast believable characters at all levels and tell a story that keeps you interested from beginning to end. And, you root for the boys all the way through, too