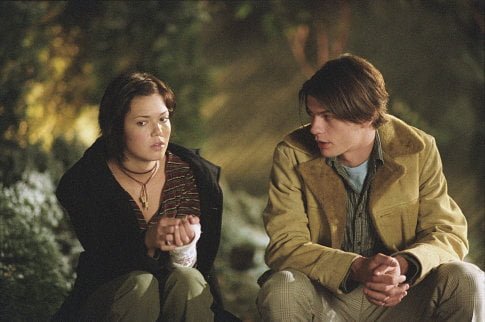 Halley Martin (Mandy Moore, "A Walk To Remember") is down on relationships following the split of her mom (Allison Janney, "The Hours") and DJ dad (Peter Gallagher, "Mr. Deeds"), but with her sister announcing her engagement, her best friend Scarlett (Alexandra Holden, "The Hot Chick") in love and her own pursuit by Macon (Trent Ford, "Gosford Park"), a guy she's more than a little intrigued by, Halley has to learn "How to Deal."

I am firmly convinced that Mandy Moore has enough acting talent to have a long career in front of her, but "How to Deal" is a random assemblage of contrary situations, hoary marital comedy cliches and out-of-left-field teen melodrama. Director Clare Kilner fails to shape her material into a coherent teen romance. Halley is supposed to be disillusioned by romance, yet the only example of a ruined relationship comes from her parents. She's quickly confronted by the bloom of new love when she walks in on Scarlett and Michael in bed together (in the first of many implausibilities, Halley just walks into her friend's bedroom because she hadn't been answering the phone). Halley runs into Macon in their guidance councilor's office, then he pursues her to discuss Jedi mind control and talk her into a date. Halley agrees, but not before cordoning off her accessibility with words about ruining a relationship by trying to have one. After a tragic sudden death followed by a teen pregnancy, this conversation picks up as if nothing had happened (and indeed seems as if maybe it was edited into the movie in a different place than was originally intended). Young love montage ensues. Subplots running through the film concern Halley's dad's 'elopement' with his blonde bimbo producer and Halley's sister Ashley's (Mary Catherine Garrison, "Moonlight Mile") wedding to Lewis (Mackenzie Astin, "The Last Days of Disco"), a presumably anal-retentive type who is awfully free-wheeling with wedding plans. Mom gets into the love vibe via a meet cute with Steve (Dylan Baker, "Thirteen Days"), a vending machine maintainer in a civil war reenactor's costume! This cockamamie flick was adapted by Neena Beber from two Sarah Dessen novels that apparently have not been well meshed. Pre-wedding scenes between Halley's family and Lewis's feel like retreads from this year's "A Guy Thing" with their silly bathroom ballistics and pot-smoking grandmas. This movie stuffs so many life altering events into 96 minutes they become hokey, like the funeral where the playing of The Flaming Lips's 'Do You Realize?' on a boom box not only makes everyone 'connect' but causes the deceased's lover to stand up and smile. Moore is perfectly natural in this role when she's not being subjected to such idiotic lines as 'I'm not falling in love with him. I just like kissing him.' or telling Macon he'll pay for his mistake for a 'long, long time' during their big make-up scene (not a great lesson about mature relationships for a teenage audience). Ford's shaggy charm relies a little too heavily on a furrowed brow and hanging forelock. Holden has a fresh-faced appeal as Halley's tragically put upon friend. Janney has some nice mother-daughter scenes while Gallagher overplays his overgrown boy persona. Garrison pulls off an amusing drunk scene with nifty physical comedy, but Nina Foch's ("Pumpkin") Grandma is a one note joke. The terrific character actor Baker has never looked more out of his element. Kilner has problems blocking scenes so that her actors look uncomfortable sharing space. Halley's mom and sister are introduced crowding around a kitchen island. Halley and Scarlett have a conversation posed in front of a Christmas tree lot with their shopping bags prominently placing product. Editing is choppy, particularly transitioning into and out of Dad's wacky wedding. "How to Deal" is as awkward and unfinished as its self-consciously chopped-off title. The talented Miss Moore deserves better.