How to Be Loved (Jak byc kochana) 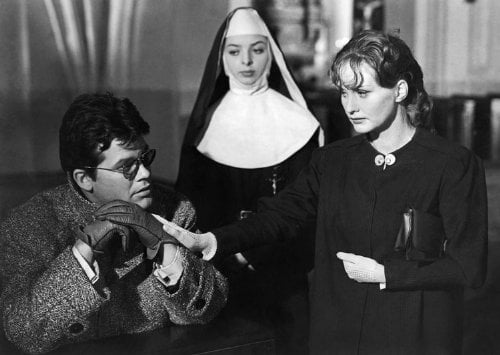 In 1939, just as she's about to make her debut as Ophelia with the man she idolizes, Wiktor Rawicz (Zbigniew Cybulski, "Ashes and Diamonds"), as Hamlet, the Germans invade Poland. Refusing to appear on a German stage, Felicja (Barbara Krafftówna, "Ashes and Diamonds") works as a waitress for the older Tomasz (Artur Mlodnicki, "Ashes and Diamonds"), who is in love with her, but when Wiktor is accused of killing a collaborator, she hides him in her apartment, knowing fully well that this is not "How to Be Loved (Jak byc kochana) ."

Wojciech Has (Kazimierz Brandys adapting his own short story) uses the flashback in a unique construction that finds his star having an internal dialogue with her wartime self as she travels to Paris for the first time years later. This harrowing account of the scars left by wartime and unrequited love counters showboating male cowardice with humble female courage. The film begins as an elegantly turned out Felicja sits at an airport bar sipping cognac, thinking about her transformation from Ophelia to Felicja (the character's need for alcohol and the silent judgements of those who serve it recall the director's first film, "The Noose"). Settling into her airplane seat, Felicja notes the man beside her, a handsome Bacteriologist (Wienczyslaw Glinski) she begins to flirt with. As she remembers her aborted acting debut, Has fools us as a stage we think is set for theater, the costumed Felicja reciting her lines, is revealed as the actors' lounge, fantasy turning to reality as air raid sirens sound. The hugely affecting Krafftówna crafts two radically different sides of the same coin, all symbolically set to variations of 'Swan Lake.' The tiny, fragile woman who hides the ungrateful Wiktor, slogging about kerchiefed bearing coal hods through the streets becomes the elegant, cynical woman who takes us through her tale. Felicja even endures rape by Nazi soldiers rather to keep her dangerous charge hidden, only to find herself abandoned the minute the Allies ride into town (once again Has uses windows to frame external plot developments and the passage of time). Ironically, she's charged with collaborating and her refusal to defend herself gets her banished from the stage for five years. It is Tomasz who comes to her rescue with the offer of a two hander radio play and Felicja's off script acting makes her a star. But that elegant woman on the plane's cognac consumption begins to wear, her hat slipping low on her head. She's rescued on the ground by the disapproving stewardess just as she begins to lose control. Who should she find in Paris but Wiktor, now a bloated ruin, boasting of his war time heroism, a tale she has no part in. With only a couple of exceptions, Has moves fluidly from one time period to the other, the plane trip itself a suspension of time. "How to Be Loved" shows the kindness of strangers recognizing an arduous past while the subject of selfless sacrifice clings to his disappearing audience. Grade: